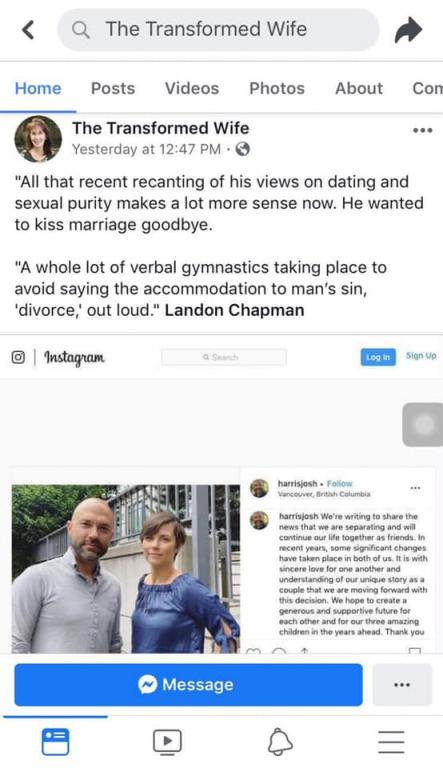 This is actually old news, from last week. I’ve refrained from commenting on this because others in the Quiverfull world were behaving so poorly, Larry Solomon, Trey Magnusson, Doug Wilson. It made the announce of the breakup of the Harris marriage small sad potatoes.

For those unfamiliar with Harris he had a huge influence on the Quiverfull and Evangelical ‘True Love Waits’ crowd. Not just teaching abstinence from sexual behavior outside of marriage, but going much farther, teaching that even thinking about another person in that would spoil your purity. Josh Harris wrote “I Kissing Dating Goodbye” and much of the purity culture people latched onto his ideas of soul ties, no dating, courtship only models.

His book was quite frankly obsessed with sex, while saying sex was only for marriage. Harris said you should wait to even kiss until after you’d spoken your marriage vows. Purity culture on steroids, and like steroids it did some damage to so many young people that followed his edicts.  We’ve published so many stories here in the past from young people who came out of Quiverfull with strange ideas about relationships with the opposite sex that did nothing but create significant problems for them.

It’s interesting to note that all of the courtship/marriage couples in Harris’s various books are all divorced now. It does not say anything positive for the simplistic theology of purity culture working out in complex reality.

During my QF years I was always subtly opposed to this theology. But my youngest daughter bought it wholesale, hook, line and sinker, lecturing me on it while reading “I Kissed Dating Goodbye” and “Dateable. Are You? Are They?” By Justin Lookadoo.

My objection then and now is that part of growing up, growing independent is learning how to navigate relationships, friendships, other people, even if there is no romantic subtext going on. It’s an important skill that the tendency of Evangelicals to shelter their children skips.

Moot point now because Lookadoo has had a DUI arrest and renamed and reedited that book I mentioned. It used to be titled “R U Dateable” but seems to bc scrubbed from Amazon and other places.

A couple of years ago Joshua Harris apologized for his book, stopping publishers from releasing  new copies. Enough time has passed that he realizes how harmful his words are. There’s even a movie out about it now. I’m not sure his apologies are enough for those harmed by the book.  Only those who struggled with that version of purity culture can determine if it’s enough, and everything I’ve seen seems to suggest it is not.

Now Harris and his wife have announced they are separating and planning on divorcing. I feel horribly sad for them, but not surprised. Toxic purity culture takes two more victims.

Wife Shannon Harris is reportedly writing a play about her journey away from faith as well as the purity culture. I cannot wait to see what she comes up with.

I wish them both health, happiness and healing. Divorce is tough enough when you’re not in the public eye having to eat a heaping helping of Evangelical crow at the same time. 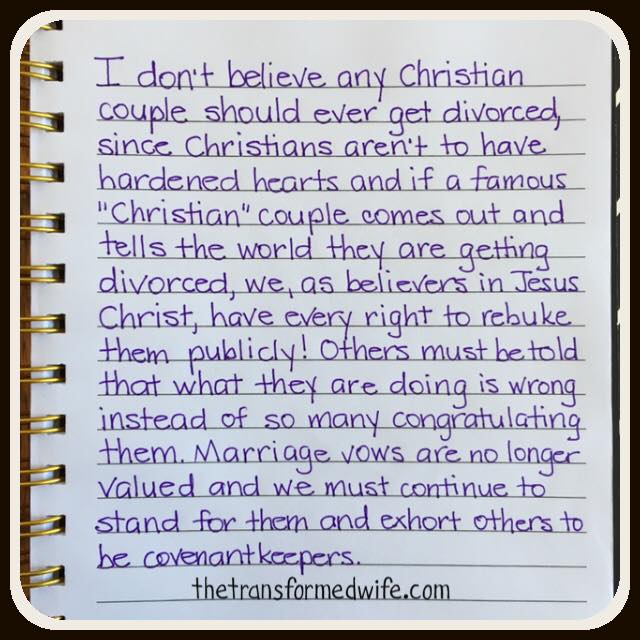 Most people are not surprised, but a few of our regular cultural enforcers have had a plethora of nasty things to say, in particular Lori Alexander of The Transformed Wife. How sick and sad. I’ve always said that fundamentalists and evangelicals eat their own dead.

This is the response of one of Lori’s Top Fans. How classy. How Christlike. There are many more I could share from the awful pile of nasty reactions at Lori Alexander’s various social media accounts, but this is pretty much the pinnacle of blaming and shaming. It’s all much of the same.

I’ll leave you with this quote from Harris on his journey:

“I think it’s made us realize how there’s heartache and there’s pain no matter which pathway you choose in life,” Harris said. “There’s no path that you can choose that can protect you from that.”

July 23, 2019 Nancy Campbell Womb Worship
Recent Comments
86 Comments | Leave a Comment
"This is late, partly bc of my preoccupation and partly bc I'd been slowly reading ..."
Jennifer Serena’s Serenity – Luxury Hotel, Birthing ..."
"Thank you for your commitment to truth and love, Suzanne. Best wishes to you and ..."
Meredith Anne Not a Goodbye, More of a ..."
"For what it's worth, I've learned a lot from you about a Very Creepy movement ..."
Gwen Pryce Not a Goodbye, More of a ..."
"Unfortunately, this kind of satire (if it even is satire) is what gives Christianity the ..."
Emily Is Biblical Gender Roles a Big ..."
Browse Our Archives
Related posts from No Longer Quivering