Richard Spencer’s Wife Started a GoFundMe to Help Divorce Him

Richard Spencer’s wife, who recently accused the infamous Alt-Right leader of abuse, started a GoFundMe so that people could help her afford to divorce him.

I have written about Spencer in the past, like last year when I reported that he has some DNA that can be traced to Western and East Asia, North Africa, and even Sub-Saharan Africa. In a recent HuffPost article, his wife Nina Kouprianova accused him of being consistently abusive.

Now, after eight years as his business partner and confidante, ally and enemy, Kouprianova is divorcing Spencer, America’s second-most notorious racist. The fallout is a bitter tangle of fear and rage, with dueling allegations of abuse and harassment. In the affidavit filed in their divorce proceedings is a copy of an email Kouprianova sent to Spencer on Jan. 4, 2011. She’s replying to an email he sent. “Did you arrive back…” the subject line reads. And in the body: “…safely?”

“Yeah,” she replied, “apart from seeing the bruises on my wrists and knees from yesterday’s adventure down your staircase that you sent me on, the trip back went without major incident.”

“Are you working tonight?” he replied.

The article goes on to show text messages between the couple, but it doesn’t go into detail about the financial difficulties she says she’s having divorcing him. I spoke with Kouprianova, who told me in an email that she launched a fundraiser for the legal costs associated with the divorce.

“It is a bit awkward for me to ask for financial aid: I have worked since high school, through undergraduate and graduate degrees, and while raising small children, sometimes holding down more than one job while being a full-time student or a full-time parent,” she told me via email. “However, I have exhausted all other options. Litigation is expensive, especially in high-conflict scenarios.”

On her fundraiser page, which can be found here, Kouprianova goes into even more detail:

Please help me leave an abusive marriage for good by finalizing my divorce  from well-known “Alt Right leader” Richard Spencer. My goal is to establish longterm safety and security for our two very young children and for myself. My legal fees incurred in these ongoing divorce proceedings are in the tens of thousands of dollars and counting. My financials means are modest and disappearing quickly. Furthermore, my residence and job are both at the mercy of a Spencer family member. Statements have been made about leaving me—and the children—homeless and jobless. Any help would be greatly appreciated!

I asked Kouprianova about Spencer’s evolving political beliefs and how they might have been related to the abuse she alleged, and she said it was a “nuanced question.” She said he told her he was a “Leftist” in high school, and pointed to a voting record that included a Democrat.

“First, looking at Richard Spencer’s political development throughout his life, one can certainly detect a general trajectory toward the Right… As I’ve previously said, when I met him in early 2009, he described himself as a Libertarian. And in 2019, we know what he calls himself now,” she told me today. “Second, in my marriage, specifically, the escalation of abuse and the radicalization of politics were a definite parallel development.”

She added that it’s “unclear” how Spencer treated women prior to her.

“As far as he told me, his longest relationship prior to me lasted less than 6 months, and I met him when he was about 30 years old. (This should have been a red flag.) It is uncertain why his previous relationships would terminate so early in the romantic “honeymoon” phase if it weren’t for serious reasons. But I can only speculate as to what those reasons were.

For his part, Spencer told me on Twitter that his wife married him after he founded AlternativeRight.com.

“She’s creating quite a narrative for herself. I was not a leftist in high school nor would I ever say something like that,” he told me. “I voted for Kerry in 2004 in a straight, anti-Bush, anti-war vote.”

Spencer, who categorically denies claims of abusing Kouprianova, further added that the “narrative Nina is promoting is self-serving and bizarre.”

It’s a strange situation. There is evidence that Kouprianova has promoted her own controversial views in the past, but as Spencer notes, people often do change over time.

“Everyone obviously evolves, and she definitely evolved,” Spencer told me. He said that while his beliefs haven’t fundamentally changed since they married, his articulation of his beliefs were probably different.

“She never expressed any moral or profound philosophical disagreement with my worldview. I would say that, over the course of our marriage, she did become less of a White Nationalist, if you want to use that term, or pro-European thinker, and became much more of a fervent Russian Nationalist.”

In response to Spencer’s statements, Kouprianova said he founded his Alt-Right websites after they were living together and “the relationship was serious.” He also seemed to have supremacist intentions, she told me.

“At the time of its launch, Richard Spencer’s explicitly communicated purpose was along the lines of one of his favorite books at that time, Libertarian Justin Raimondo’s _Reclaiming the American Right_. In that regard, one of the focal points of that website was supposed to be a challenge to the neocon agenda of endless war, precisely as Richard indicates in the quotation you provided about his 2004 voting record.”

“Challenging Richard Spencer’s world view was not safe to do in a household where “incorrectly” washing his favorite cast-iron pan would lead to hours of denigration. Furthermore, even my publicly available Court affidavit contains a transcript to e.g. sub-exhibit 30 (attached). In that particular recording, Richard Spencer was screaming at me because I did not pass his “ideological purity” test. When the consequence of disagreeing with Richard ranged from the silent treatment, to screaming matches, to being kept awake at night, to outright physical violence, then over time I, as the target of such treatment, learned to keep my mouth shut.”

Here is the transcript excerpt: 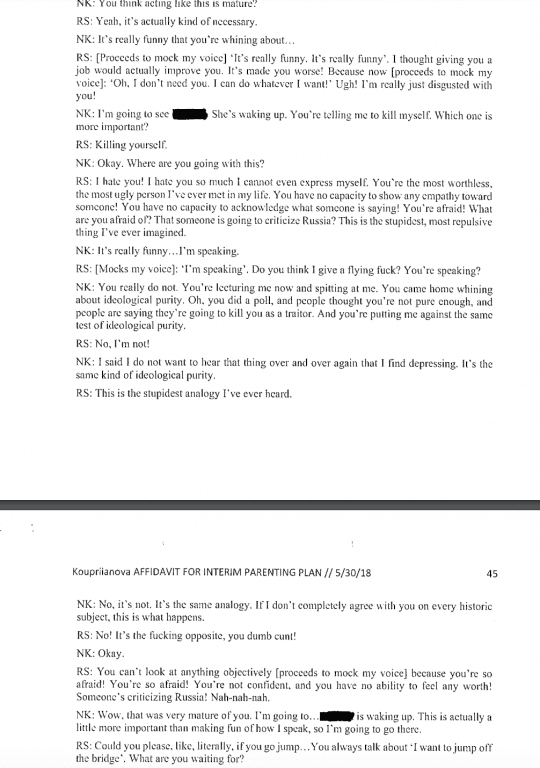 It’s a major fallout from an infamous power couple, so there is bound to be some controversy and drama here. But how it all will shake out remains to be seen. 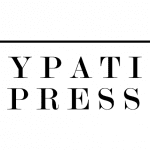 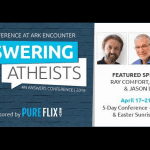