Do we practice what we preach? Why I cannot be anti-gay rights. 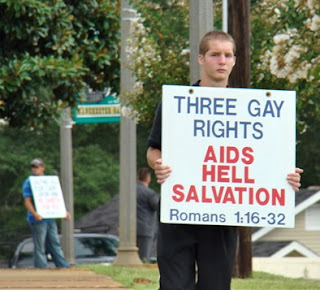 I was recently in a conversation with my evangelical cousin. She is a very sweet loving person. She doesn’t hate gay people, but she knows that the Christian faith doesn’t approve. In Junior College she said that she was anti-gay rights in class, and was confronted by her classmates. She justified her political opinion with her religion. Reflecting on it later, she told me “its nice that you can blame it on your religion, then people don’t hate you so much.” In my mind I was thinking, “You’re right, maybe they don’t hate you, but they hate your religion. “

Even if I accept the teachings of the Church that homosexual actions are sinful, I could never justify the discrimination Christians have against the GLBTQ community. The political anti-gay movement frustrates me to say the least. Why would professing Christians ally themselves with hateful crowds of bigots? Why would they force their religious beliefs onto other people? Religion is a free-will choice, never something that should be forced or enforced by law or the state.

Yes, a Christian should seek to avoid all sexual immorality. But that has no bearing on how we are supposed to treat others. We have no examples of Jesus instructing us how to attack other people for their sins. The example we do see (over and over I might add) is love. Love for the sinners, tax collectors and prostitutes. Jesus taught us how to love unconditionally. That is what the cross is all about. Not about addressing the “reality of sin” in other people’s lives. Jesus didn’t come to judge the world, he came to redeem it. He preached “The Way” to people who voluntarily asked, people who chose to be there to hear his words. Jesus was never a political figure, no matter how much his apostles longed for him to be.

And yet the Christian community continues to be highly active in bigoted political movements. Contributing to the massive culture of shame and discrimination that contributes to young people everywhere to taking their own lives rather than try to face one more day of hate.

It is not our job to judge. If someone decides in and of their own free will to be a part of a religion, then they can seek to follow the truth of that religion as closely as they can. There is no reason to demand that everyone else follow that understanding of truth if they are not a part of that religion. And yes, a religion may judge certain actions as sinful. But the state is not religious. So if those actions cannot be argued against without using religious reasoning, the government has no right to ban them.

Listen to how scary this sounds “we, as Christians, can’t allow people to think.”? Christianity isn’t a mind control religion. We don’t have a duty to make people think that our religion teaches this or that. Christians don’t have the responsibility to allow or not allow people to think anything. The apostle Peter said, “Be prepared to give an account of the hope you profess.” Yes, if a non-Christian wants to know the Christian teaching regarding homosexuality, adultery, abortion, or whatever; that is their choice to initiate. Why are telemarketers obnoxious? Because they solicit you without your invitation. Marching for political issues is not religious evangelism.

Making obnoxious attacks on people in the name of truth is a disgrace.

However, living a Christian life, manifesting joy in the Lord, imitating Christ, is radical and will be noticed. When non-Christians see Christians showing unconditional love that makes them want to know what Christians have. People want to know about our hope in the face of death. Let’s be real, very few people hate Christian disaster relief efforts, rescue missions, or service projects. Most people who have converted to Christianity attribute their faith to the powerful love and witness of believers they encountered. I’ve never met a convert who was “confronted with truth” in a political rally.

Gays wouldn’t even need Political Actions Committees dedicated to Gay Rights if there weren’t well meaning but misguided religious people trying to block their access to jobs, housing, and equal rights under the law. Opposition to gay rights and gay marriage comes on religious grounds. Even appeals to the natural law are subject to religious reasoning on the basis of a creator. How would you respond to a Mormon campaign to ban Starbucks or caffeinated beverages? You’d probably find it ridiculous. But to a Mormon they would be simply trying uphold “God’s Truth” right? Or how about a group of Orthodox Jews trying to ban non-Kosher foods in the USA? To boot, non-Kosher foods are a legitimate health risk. Shellfish is one of the leading causes of food poisoning in America. It is ridiculous isn’t it? To Orthodox Jews it is God’s Truth. But the argument cannot be substantiated on non-religious grounds alone.

Why are those examples any different from a million Christians standing on the National Mall to protest the rights of gay people to choose for themselves how to live? It is just as ridiculous. Signs blaming disease on homosexuality are just as cheap of a shot as blaming non-Kosher food for food poisoning. Political activism to prohibit or ban gay marriage and gay rights advocates something which goes against our constitutional right to freedom of religion. Each of us is free to believe or not believe. The last day is up to God, not man. Just because you have the legal right to say something on the basis of freedom of speech, doesn’t mean you should.

Lets look at another area of sexuality that Christians believe is contrary to God’s law. While adultery is recognized as wrong in all religions, it has never been a crime in the US or even in Christian Europe. Why? Because morality cannot be legislated. However, sodomy was a crime until recently. Why? Bigotry. Adultery involves violating a contract of marriage. It hurts someone else. It violates the trust of a partner in a marriage. For this reason, adultery has always been viewed as bad even by non-religious people. Homosexual union involves people’s free consent. It doesn’t hurt anyone (Unless of course, one argues for hurt on religious grounds, again not a valid legal argument). If someone doesn’t want to be in a gay marriage, then don’t marry someone of the same sex. It is that simple. Granting full rights even to those who do not obey your religion’s principles is profoundly American. The need for a Savior is in no way diminished by whether or not the government permits two people of the same sex to get a legal marriage license. Humans are sinners, but God is the judge, we are not, and neither are nations.

Advocates for gay marriage aren’t asking the church to approve of their marriages. They are asking the government to grant them the right to live their lives as they believe. As a Christian, I want the same from the government. Marriage licenses are under the jurisdiction of the government. Having a wedding ceremony in a particular church is under the jurisdiction of that church. The USDA can approve non-Kosher food, because non-Jewish Americans have a right to pork and shellfish. However, Jewish homes are free to keep their homes clean of offending food items. Heck, even in Saudi Arabia (a religious state) when the call to prayer goes out five times a day, non-Muslims are not expected to drop what they are doing and pray? Why? It isn’t their religion.

How much more simple can this be? When will American Christians get over themselves. Just because they are currently the majority doesn’t mean they get to control everyone else’s thoughts, lives and choices. Just because the Christian religion disapproves of homosexual actions doesn’t mean gay people should be subjected to signs calling them perverts or degenerates, or get rejected in a government building from marrying the person of their choice. Religious truth is a voluntary thing. A person can choose to adhere to it or not, it’s a free choice. I don’t understand why Americans feel the need keep stuffing their “truths” down non-consenting people’s throats. 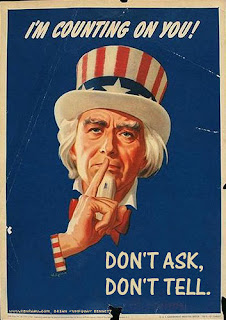 The “don’t ask don’t tell” policy of the US Army is another great example of blatant discrimination against people with homosexual orientation. You are free to volunteer to serve your country, as long as the Army doesn’t know if you are gay. However, if they find out that you are gay, whether you let it slip out inadvertently or you are outed by someone else, the Army will fire you. Yep. They will let you go for no other reason.

I fail to see how this discrimination on the part of the US Army is any different than many other unjust employment laws perpetuated throughout history. Being denied employment under Hilter’s rule because your grandmother was Jewish. Being denied a job because of your racial background in South Africa. Or even the character Fantine in Victor Hugo’s epic Les Miserables, who was fired from her factory job because someone revealed that she had an illegitimate child hidden somewhere.

It baffles me when Christian’s participate in this kind of discrimination. Even if the Catholic Church finds Homosexual actions sinful, they have clearly stated that having the attraction in and of itself is not a sin. This type of treatment is unjust on every ground. I’ve read the Catholic arguments against ENDA, and I still don’t understand them. The argument is that even though the Catholic Church agrees with equal employment rights for ever person regardless of sexuality and gender identity, they cannot support ENDA because it could lead to other rights such as the legal right for gays to marry. I think that’s a stretch, and like I said above, I don’t think that it’s really any religion’s business to dictate whether or not people have the right to enter into a legal state. But, understanding the reasons behind why the Catholic Church does not religiously sanction gay marriage, I guess I can understand why the official church position is against gay marriage politically.

Recently, a judge struck down “don’t ask don’t tell” seeking to end job discrimination against gay individuals in the US Army. And guess what? It has absolutely nothing to do with gay marriage. Nothing!

Imagine if the Catholic Church took an official stance supporting the end of the discriminatory “Don’t ask Don’t tell” policy? Imagine if they put themselves out there, separate from pretty much every other Christian group, in a visible demonstration of support for the people they claim not to condemn?

I doubt it would ever happen. But wouldn’t it be an awesome way for the Catholic Church to prove that they practice what they preach?