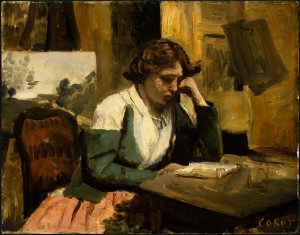 I read constantly. It was a way to find out more about the world outside my parents home, and escape from the day in day out monotony, and other than our family movie nights, some of my only entertainment.

Some books that I read, were not approved. I speed-read them without my parents knowledge in the library (The Princess Diaries Series, Star Wars Sci-Fi) and later when I had access to book stores bought them and hid them in the cabinet that was mine (Leon Uris and Chiam Potok). Sometimes unapproved books made their way into our house from grandparents downsizing (Readers Digest collections) or a large box of classics a distant relative or friend dropped off for the homeschool kids, which would then sit in the corner of the living room until my mom had a chance to sort and approve which we could keep. In that window of time I would do my own sorting and read as much as I could before books were disposed of.

Sometimes I was caught reading unapproved materials, and I would be lectured on the dangers of reading such things and the book would be put away or thrown out. There were a few times as a teen where I was banned from all reading other than my bible or theology books (for days, weeks or months) until my attitude improved, or I consistently got all my chores done on time, or until my dad randomly decided my punishment had lasted long enough.

Some of the books I read were marginally or grudgingly approved. Books like the Dear America Series, these were Historical Fiction, written in the first person from the perspective of a young girl at some point in history. My mom originally approved them on a case by case basis, but at some point couldn’t keep up with my speed reading and gave up policing which ones I could or could not read, and I devoured them all, including the ones about girls who were not Christians, and the ones that talked about suffrage. Another one that squeaked by was “The Diary of Ann Frank” I’m still not sure what caused it to be approved, but I remember my grandma expressing surprise that I wasn’t allowed to read it, and then eventually I read it.

All of these books shaped me, but the books I’m writing about today are the books that were unequivocally and heartily approved by my parents, but contained messages about women daring to step outside the conservative box of their time, that I don’t think my parents intended me to find. I suppose I am using the term “Feminist Literature” somewhat loosely here. These books are all at least 100 years old, were not LGBTQ inclusive or racially sensitive, and they gave a lot of simplistic boy meets girl type scenarios to conclude the story, but they also introduced me to ideas of womanhood that I am not sure I would have encountered otherwise. Also interesting to note, all of these books have female authors!

“An Old Fashioned Girl”- by Louisa May Alcott

I read so many books by Louisa May Alcott. My mom read “Little Women” aloud to us when I was young, 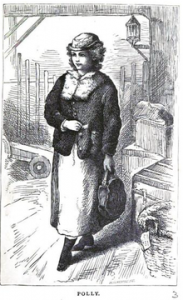 and I read as many other books as I could find in print. Alcott’s stories tend to have heavily moralized themes, but I still value her ability to make her main protagonist female most of the time, and that she always tucked in a spinster character somewhere as a subtle nod to the fact that life can be lived as a female with out being a man’s partner. I mention this title in particular because I remember being impressed with the fact that Polly (the main character in the story) moved away from home to live in the city at 20 years of age. She got her own place, supported herself, and navigated her own relationships, all of which were forbidden in my home of origin at the time. I wondered what it would be like to live as an independent woman, without having every decision fielded by my parents.

This is another series I loved. I got “Little House in the Big Woods” when I was 7, and my aunt gifted me the rest of the series when I was 8. My mom also read this series out loud to the family. Through the whole series Laura struggles to fit the stereotypical image of femininity, she runs instead of walks, lets her bonnet fall down her back instead of shade her face, and likes to hang out with her dad. “These Happy Golden Years” is at the end of the series, and Laura is closing in on adulthood. I remember being surprised when Almonzo starts to show interest, they go for enumerable buggy rides, without a chaperon, which by purity culture standards meant Laura’s reputation must be compromised! But no one in the story seemed to feel that way? Also when Laura and Almonzo get married, she makes a specific request that the word “submit” be left out of the vows, because she would not promise to obey anyone. This was shocking to me, and intriguing.

“Anne of the Island”- L.M. Montgomery

I am not sure why the Anne of Green Gables series was approved, when L.M. Montgomery’s other series “Emily of New Moon” was not. I read all of the Anne books several times over, and reveled in her magical dreaming, and lived vicariously through her close friendships. I went with this title (the third in the series) partially because of the story-line of her moving away from home to get her degree, but also because of the relationship that happens in this book. Throughout this era, Anne is involved with a “tall dark and handsome” young man, but near the end of the book realizes that he doesn’t really fit into what she wants in a mate, and she dumps him. She feels horrible about breaking his heart, but life goes on. The idea that a woman could legitimately end a relationship that was not working for her was a big one in a belief system where dating was practically equal to marriage, and marriage was forever no matter what. 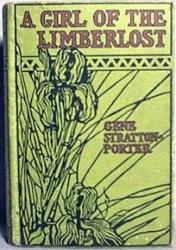 This book I received from my grandpa, who got it at an auction. It was a first edition, with a torn jacket and worn binding, and I read it many many times in my teen years. While the girls in the other books I mentioned here had either support, or mild disapproval to deal with from their parents, Elnora in this book deals with much more on that front. Her mother is neglectful, depressed, and vehemently against Elnora pursuing her education. But Elnora is determined to go to high school anyway, and she does, despite having older clothes and used books. She builds a support network, figures out how to support herself, and persists in her goal despite the almost constant negativity from her mom. This stood out to me, because it was so hard to ever imagine standing up for myself like that. I wanted to please my parents so badly, the idea of pursuing something they did not approve of was mind-boggling. But I read the book again and again, hoping that maybe one day I would have courage (like Elnora) to be myself, despite the obstacles.

So there you have it. Fundamentalist approved Feminist Literature I grew up reading. Books that were so old, they had to support the fantasy world the fundamentalist culture was trying to re-create, right? Except even 100 year old books were more progressive than the conservative worldview I grew up in.

What subversive ideas did you glean from parent approved reading?

May 16, 2015 Fight or Flight
Recent Comments
0 | Leave a Comment
Browse Our Archives
Related posts from Permission to Live