Why I wish I had gone to College 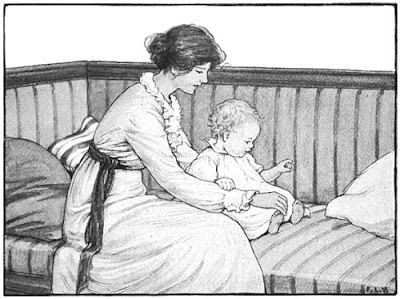 Every morning, I get up and make breakfast for the family. We have potty breaks and diaper changes all around, and I negotiate outfits with toddlers. When everyone is dressed, I try to change out of my pajamas too. I spend the day corralling kids, nursing babies, reading them books and occasionally pulling out a messy project for them to try. I do the laundry and wash the dishes (most days anyways). I might read a book of my own in little snatches throughout the day, and if I’m lucky I might get a shot at a shower when my husband is home to watch the little kids.

Sounds like the life of any stay-at-home-mom, right? Except I’ve been doing it for 16 years, and I’m only in my mid-twenties.

Before my life as a wife and mother, I was a stay-at-home daughter. As part of the Quiverfull / Patriarchy movement, my parents believed that my place as a female was to be a keeper-at-home, a “helpmeet” for my husband, and a homeschooling mother to many children. To best prepare me for this God-ordained role, I started helping out at home from an early age. By the time I was in my early teens there was no aspect of child-care or housework I was not capable of.

While my parent didn’t subscribe to any one group, they were heavily influenced by organizations like ATI/IBLP and Vision Forum. My Dad got “Patriarch” and “Quit you like men” magazines. My mom got “Above Rubies” and “Gentle Spirit” and I read them both. We got the Vision Forum Catalog every month, and purchased many of their materials. I remember my mom being sad that they could not afford to buy more. I read the entire Elsie Dinsmore series, and Mildred Keith series. I read books on parent guided courtship and male headship authority. And I read books on “beautiful,” “authentic” girlhood. All of these books taught that the world was a very dangerous place for a woman. God had designed her to be at home, creating a peaceful haven for her husband and children. The books said that any girl who left her father’s protection and went out into the world to get an education or job would end up sad and alone, because she was not living the life God willed for her.

God wanted us to dare to live differently. His plan for women involved getting back to the family principles the home was founded on. Girls needed to be brought up knowing instinctively how to care for babies and keep house. They needed to be taught to be quiet, submissive, and modest and pure. The only way to do this, was to keep separate from the world. So my parent homeschooled and kept me from doing much of anything outside of our family circle, so that I would never get used to experiences outside the home, and I would learn to be content in my homemaking role.

It sounded so romantic when I was ages 10-13. I was going to be amazing someday! My husband was going to be pleased that I was so good at caring for children and keeping house. I was practicing submission to my father, taking it very seriously whenever he pointed out some behaviour of mine that “would infuriate my husband someday.” He knew what God wanted, and what men wanted. If I wanted to be successful and happy someday, I had to start by pleasing my Daddy.

I put my whole self into my role as a stay-at-home daughter. I loved studying, but I couldn’t keep up with my self-taught high school materials and get all of my work done, so I gradually fell further and further behind. But school wasn’t as important as pleasing God. Sometimes I wished that I had the chance to study more than just cooking, cleaning and sewing, and I did ask my parents if I could take some classes while living at home, but I was reminded that it would only be a waste of time and money to go to college when none of that education would apply in the home. A college atmosphere could take my focus off the Lord, and fill my head with thoughts of career and rebellion. After some begging on my part, Dad said he would permit me to take a few online courses from a very conservative school if I insisted, but it was clear that this was not what he felt was wise. He also said that I had to finish all my high school material first, and that my school work could in no way interfere with my household duties. I was so overwhelmed at the thought of trying to keep both my father and a school happy, that I gave up on the idea of further education.

After a parent guided and approved courtship, I got married. I had never done anything outside of the home, so I was a stay-at-home wife for that first year and a half as we struggled to make it on our own. Money was very tight, and I often wondered what it would be like if I had the qualifications to get a decent job and let my husband focus on his graduate studies. But the shame my husband and I had over gender roles was overwhelming. We believed that work was part of Adams curse, and if a husband was lazy enough to make his wife get a job, she would now be burdened with both her own curse of childbearing and the curse of Adam as well. So I piddled around the empty apartment. I cleaned, watched TV and did some crafts, and tried to care for my exhausted husband the few hours he was around after school and work.

Money was so tight at one point that I actually went out and asked if the fast food place was hiring, I felt like I was shoplifting or something as I drove home with the job application. After filling in my name and address, I literally had nothing else to put on my resume. I had no schools to list, no work experience outside the home, and it felt silly to write “stay-at-home mom” in the career box, since I had no children. I had miscarried my first 2 pregnancies, and I was so afraid that I would never be able to have children. My role as a woman would be severely constricted if I did not have children. Other than caring for them, the only other thing I was free to do would be to help my husband in his work, and that was limited since I could not write sermons for him. I remember crying, and praying to God again and again to give me children. We hadn’t even been married a year, but I was a failure as a woman and wife. I had tried to do everything right, but somehow I must have disappointed God, since he was not blessing my womb. I felt like such a burden on my husband, if only I was able to take some of the work off his shoulders by earning some money. Instead I was stuck cleaning the already clean house and cooking my husband meals that he ate when he got home late at night.

Finally, our third pregnancy was viable, and baby Ms. Action was born. Ms. Drama arrived 14 months later. I was busy now, taking care of the home and the babies. But instead of feeling excitement to be a mom, I found myself on autopilot. I loved my husband and my children, but I had been doing the same thing for so long. I had no idea who I was or what I liked. My parents had taught me that being an individual and being a mom are incompatible. Being a wife and mother, and doing pretty much anything else, could not work together in their minds. So I was raised to be a machine, my mind was not important, it was what my body could do that counted. I was objectified. Exactly what Vision Forum claimed they were fighting against.

I believed the “Beautiful Girlhood” spiel. I did it everything the “right way”. I stayed at home, I submitted to my father, I skipped college, I prepared to be my husband’s helpmeet, and I regret it. I had years of my life go by where I was little more than an indentured servant to my parents. My husband and I were forced into thousands of dollars of debt working for an abusive employer that we could have thumbed our nose at if I had been able to get a job. While I was without the commitments of marriage and children, I could have easily gained an education that could have served me and my husband well in early marriage. All those years living as a quiet submissive housekeeper, I could have been discovering interests, and developing as a person.

I wish that my parents could have seen my potential and honoured my dreams and goals enough to encourage me to develop them for myself. Instead they saw how I could serve them, and kept me from growing up as long as they could, setting my starting point far behind the average woman out there. I wish that I had been able to live my life in natural stages of childhood, adulthood, and motherhood. I have so much more peace in my current life as a stay at home mom now that I realize it’s not going to last forever like I was told it would. In the meantime I am finding that I’m not as helpless or ignorant as always believed. I’m hoping to get an education someday. It won’t be as easy now as it could have been then, but I have to start somewhere. My husband and I work as a partnership now, and my hope is that someday we will be able to equally share the work needed to support us, as well as time with our children. I’m learning what it means to have a dream, and I’m a better person for it. Sometimes I am still frustrated that given all the twists and turns life can have, my husband got stuck with someone who is basically another dependent. Financially, I am unable to offer much more than encouragement and maybe a night-shift minimum wage job. I have my parents to thank for that.

This post was written on request for and will be cross-posted at ReThinking Vision Forum, a resource blog for people thinking about or recovering from the fallacies of Vision Forum’s guide for “Godly” Family Living

August 25, 2011 You never know who is listening
Recent Comments
4 Comments | Leave a Comment
Browse Our Archives
get the latest from
Nonreligious
Sign up for our newsletter
POPULAR AT PATHEOS Nonreligious
1