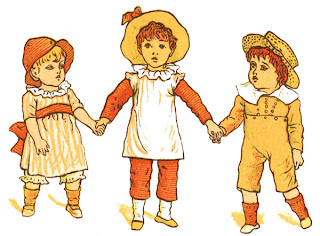 We were at the grocery store, and it wasn’t the greatest day for Ms Drama. She did not want to sit in the cart, she wanted to walk. So she spent the entire time in the store hanging over the side of the cart and whining about how everything was wrong with the world.

When we finally got up to the check out counter, she dropped her sippy cup on the floor for the third time, and her daddy picked it up and said in a serious voice “If you drop the cup again, I will put it away in the diaper bag.” Ms Drama nodded and took the cup, and I was smiling to myself when I happened to notice a Mennonite family waiting in the next line. The five small children clustered silently around their mother. A little girl clad in a dress and head covering stared at Ms Drama in fascination, the little boy stood with his mouth hung open.

Suddenly I remembered how many times I had been a little girl standing with my parents in a public place. Working to keep myself quiet and solemn and alert for the next order from my father. If I wasn’t paying attention and failed to obey quickly my parents would get angry, and our large family would look bad to the people around us.

My parents used to point out children who behaved like my two year old, “see what happens when parents don’t care enough about their kids to spank them?” or “It’s too bad that family doesn’t know the Lord” and “They can’t understand the joy they would get from their kids if only they knew how to discipline”. I grew up under the impression that anyone (no matter what their age) who was not practically perfect, could not possibly be “a real Christian“.

When our behaviour in public was complimented by some well-meaning person, I remember my parents thanking them, and then later telling us that our family was a Godly witness to what families could be if only everyone did it like we did. I don’t remember being thanked or praised for good behaviour, it was all attributed to the “success” of “godly parenting”. As child I was so afraid of letting God and my parents down by my misbehaviour. And it showed in parenting my own children.

At that moment in the store, I realized that almost 2 years after breaking out of punitive parenting, I’m no longer fighting the urge to care what other people might think. I don’t have that pressure in the back of my head thinking that everyone is watching to see how our family is going to fail, just waiting to see a reason to attack people of faith. I just parent in public the same way I parent at home.

I don’t worry that other people might think that I am being a permissive parent if my child is whining. I don’t have to worry that someone might see and report what they think is too harsh, because I don’t use harsh parenting methods any longer.

I am getting better at being attuned to my children’s needs. I am learning to speak to them with respect. I am able to enforce boundaries and rules when something happens, without threatening a spanking in the car or “when we get home”. I still have my moments of frustration when people roll their eyes as I walk in with 3 small children and a large pregnant belly. I still have embarrassing moments, like when we walked to our table in the restaurant and one of our children failed to follow us the 10 feet to where we were sitting down, and then screamed because she thought she’d been left alone in a strange restaurant.

But for the first time, I am finally confident in the way I discipline my children.

March 27, 2011 Not perfect, but (I hope) Beautiful Anyway
Recent Comments
0 | Leave a Comment
"As a new mom, even if my daughter is a toddler now, weaning is really ..."
Lynn Toh Weaning my Tandem Nursed Toddler
"So, I came across this post for the first time today, two years after it ..."
Sheila Warner Finally Heard? The Duggar Aftermath
"Just wanted you to know that I keep checking occasionally for updates, and I hope ..."
William Burns Brave New Life: Part 7: The ..."
"> How does that make sense?It saves them lots of money."
Tim Locke How I lost my fear of ..."
Browse Our Archives
Related posts from Permission to Live