Hurricane Sandy, the relative nature of suffering, and the fragility of urban community

Today is the one-year anniversary of Hurricane Sandy hitting New York. I live in downtown Manhattan, so I was one of those without power for four days. No power also meant the food in the fridge spoiled and there was no internet, heat or hot water. (Though the cold water pressure remained on for me. Some in high-rises lost that too.) And while losing power on your block would not mean losing cell service, losing power in a whole area does — something I hadn’t anticipated — so without a landline, no cell meant not phone. Looking back at the post I filed here from the midst of the blackout (by walking a mile north to the edge of the cell range of midtown Manhattan) — Dispatch from the Hurricane Sandy blackout — I’m struck first by how little I was inconvenienced.

There was plenty of real suffering caused by Sandy. Many working class families in homes on the southern coast of the city and the Jersey Shore lost everything they owned and are still rebuilding. But I have to say, the way it’s talked about, you’d think thousands of people lost their lives. There are numerous far worse natural disasters every year in this world.

Part of the unevenness of the coverage of events is due to pernicious national narcissism. Anything that happens to America is enormously important. Anything that happens elsewhere is background at best unless it relates to global American power struggles, and then it’s noteworthy for that reason. This self-centeredness goes up a notch when we’re talking about the Northeast Corridor (the coast from Washington, D.C. through New York to Boston) where nearly all the news media and national political class live.

This is wrong, but certainly understandable. I am forever grateful for the experience of having lived in another country in my formative early teen years, leading to the discovery that the rest of the world did not focus on how each issue affected the United States. Quite often, they actually talked amongst themselves without including us in the conversation. Imagine that. And each nation’s news coverage is not similar to America’s in being all about that country. No, their news coverage is about the whole world. Ours is about us.

The relative nature of lack and suffering

But there’s something else at play; something much more basic to human nature. It’s the relative nature of lack and suffering. In my post last year I said this about going a week without heat, hot water, electricity, internet, telephone, and anything but candlelight to read by:

I’m not actually suffering or deprived at all by global standards. It’s only relative to what I’m used to that there is any sense of deprivation at all. What I’m used to is having the world and nearly every convenience it has to offer, at my fingertips from my living room couch. As much as I’m used to those things, I don’t need them.

I’m often struck by this relativity when listening to those in recovery talk about degradation and loss. For one person, the bottom that drugs or alcohol takes them to is selling their body; for another, it’s shoplifting. For me, it was failing a close friend at a milestone moment in their life. Each experiences a level of humiliation that brings them to a point of surrender — opening them to a solution from outside themselves. I’m not saying these things are equivalent; but I’ve learned over the years to resist my impulse to dismiss the shoplifter’s pain as silly.

I had that same impulse last year, as I heard people whining about food in their freezer spoiling, or rich people about losing their beach houses. All of which was fanned by a news media that above all else always wants to make the story seem more extreme, more exciting. After I had power and reconnected with the world and started watching the TV coverage, I vented about it a bit — Hurricane Sandy, the role of government and the preferential option for the poor.

As I said in last year’s post during the blackout, though, I spend a lot of time in nature, without any of the conveniences that depend on electricity; without any ability to connect through electronic devices; where the only chance of encountering another person is passing them on a mountain trail or a kayaking water route.

So the blackout didn’t feel like much of a deprivation to me; though it was a powerful reminder of my usual dependence on some things.

The isolation of city life

What did surprise me was to realize the extent to which my city life required me to be intentional about connecting with friends. Without cell phones, Facebook, or front doors accessible from the street, I was cut off from most of my friends who are scattered throughout the city in apartment buildings with buzzers, and come together for church and social events using subways and plans coordinated on the fly, all of which was impossible. Here’s what I said last year:

We have to make play dates with each other or we don’t mix at all. Remove the ability to chat by phone, Facebook or email, and we’re completely isolated. Throughout thousands of years of human history, this has not been the case. Except for a few individuals in certain professions, such as Plains States farmers, people have lived in communities where there was a common square, where you could approach someone’s house and knock on the door or call to them. Modern urban and suburban life is perhaps the most isolated way people have ever lived.

I’m used to working within this system — I grew up in a 27th-floor apartment — but the Sandy blackout reminded me how fragile is this urban kind of community. Many people are drawn to the big city precisely because of the base-level anonymity it offers. You can reinvent yourself, or compartmentalize your work and personal lives, or just keep to yourself and no one will bother you. Me, sometimes I’d prefer the simplicity and accessibility of a single main street where you run into your neighbors every day. But my life is not without those moments. Last night I passed a dear friend on the bike path of the Manhattan Bridge, over the middle of the East River. I was coming back home to Manhattan from church in Brooklyn. She was on her way home going the opposite direction. We pulled to the side and chatted for 10 minutes or so.

These chance encounters with friends are often, as last night, delightful surprises. It would be nice if they happened more often. 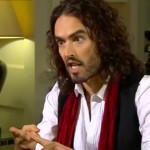 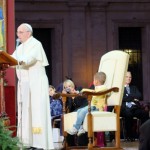 October 29, 2013 Pope Francis and the little boy who wouldn't leave the stage [VIDEO]
Recent Comments
0 | Leave a Comment
Browse Our Archives
Related posts from On the Way