Is the I Aborted My Baby Because He was a Boy Story a Confabulation?

The I Aborted My Baby because He was a Boy story is almost too perfect.

By “perfect,” I mean that it reads like someone took every crazy accusation anyone ever leveled against man-hating feminists and characterized them in a blog post. Is this story a not-so-funny first-person prank? Did someone make up a tale about how they murdered their baby boy with abortion?

None of the people I’ve dealt with took to the web to write blog posts about it. They either contacted me in anger about legislation I was trying to pass, wanted me to “help” them pass a hateful law, or, occasionally, wanted me to use my legislative powers to “get” somebody for them.

What that means in terms of the I Aborted My Baby Because He was a Boy story is that I know it’s possible it’s the truth. I know this because I’ve met and listened to people who are this crazy, this evil and this self-righteous about their vile beliefs.

I went back to the Injustice Stories web site this morning and read through the posts that it lists. The blog is said to be a forum for individuals to post their own “injustice stories.” Thus, the various blog posts are purportedly written by different people.

I’m not a linguist, but it doesn’t seem to me that the writing style differs from one post to the next. It’s not difficult to tell my writing from Kathy Schiffer’s or that of the Anchoress. All three of us write differently from Deacon Greg. Our writing is a “voice” we use, and it is somewhat unique to each of us. It’s usually that way with people.

I’m not saying that the posts on Injustice Stories are all written by one person. I don’t know that. But I will say that they do not differ in voice or syntax enough to sound like more than one person is doing the writing.

So, the question is out there? Is the I Aborted My Baby Because He was a Boy Story an attempt to prank the internet? Is it true, or is it confabulation?

I don’t know the answer to that.

Confabulation or fact, the story is possible. Sex-selected abortion is a horrible realty all around the world, including here in the United States. The world’s two largest nations by population — China and India — both have seriously lopsided male-female ratios due to sex-selected abortion. Men outnumber women in these countries by margins wide enough to unhinge the social order.

Live Action has released videos of Planned Parenthood counselors in locations all over the United States who are willing to help women obtain abortions simply because their unborn child is a girl. Half a world away, an Australian doctor had to fight to keep his medical license because he refused to either do or refer for a sex-selected abortion.

This is why the I Aborted My Baby Because He was a Boy story is plausible. I don’t know if this particular blog post is a fact or a confabulation. I don’t even know the author’s last name. But I believe that baby boys have been aborted just because they were boys, and right here in the United States.

Why would anyone do that?

When you legalize killing a whole group of people for any reason whatsoever, they will be killed for every reason possible.

We live in a fallen world. We all bear the mark of Cain. Blood guilt is our heritage, born of unending war, violent crime, family violence, abortion and euthanasia.

Legal abortion knocked over the carefully tended wall we had built between human life and our passions. It let the wolves of our own depravity into the fold. We defined a class of people as subhuman and declared open season on killing them.

So why should we be surprised when people avail themselves of this freedom to kill by doing exactly what we have given them the legal right to do: Kill for any reason that suits us.

Is the I Aborted My Baby because He was a Boy story fact or confabulation? If it’s fact, a precious baby boy has been horribly murdered. That matters quite a lot.

But in terms of social/political commentary in which individual lives get swept up and lost in talk of millions dying for decades, no, the veracity of the story does not matter. It does not matter because the laws which allow such things and the belief systems which excuse them are real.

Every abortion kills an innocent person who can not fight back, can not even speak for themselves. We can pretend they are not real, and if confronted by a million ultrasounds attesting to their reality, we can persist and refuse to back down in our claims that they are not human. If that fails, we can fall back on claims that, yes, they are human, but not human enough.

And that concept of not human enough is another slippery slope of illogic claiming to be the heart of rationality that leads even deeper into the abyss. If we can kill human beings because they are not human enough, the door swings wide for euthanasia and after that killing the poor and disabled, the “useless eaters” among us. Not human enough is such a subjective and frail reed of verbal positioning that it falls easily before the next new killing plan.

A large segment of our society has abandoned the notion of moral absolutes and seeks to replace it with verbal positioning. If they can concoct an argument that sounds convincing in their own ears, then whatever they are arguing for becomes their new morality. Ironic as it is, they then claim this newly-minted moral reality of theirs as a moral absolute.

When it comes to legalized killing, there is no bottom for these people. They sincerely believe that it is a moral imperative to allow the legal murder of any group of people that they can convince themselves should be killed. The great wall of the sanctity of human life was breached with legal abortion and that let the wolves in.

Now, they, like satan, prowl about, seeking whom they may destroy. 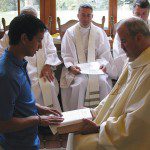 February 10, 2015
Ascension Press: Following Jesus to the Priesthood
Next Post

Will US Coronavirus Deaths Be Far Less than...
Dr. Anthony Fauci has been saying all along that models regarding coronavirus...
view all Catholic blogs
What Are Your Thoughts?leave a comment

5 responses to “Is the I Aborted My Baby Because He was a Boy Story a Confabulation?”