What if We Took a New Look at the Story of St Maria Goretti?

What if We Took a New Look at the Story of St Maria Goretti? July 8, 2015 Rebecca Hamilton

This is for those who lie in the field, the lake, the dump and the shallow grave. It is for the ones whose bodies will never be found, whose names will go unrecorded; for the forgotten, unidentified, unfound women who died at the hands of their attackers. Rebecca Hamilton

I know a simple way to turn St Maria Goretti into a saint that rape victims and battered women all over the world would turn to in gratitude and adoration.

Why don’t we look at her story from the angle that rape is a mortal sin, that it is a sin against the humanity of the individual person who has it done to them, and that it is a sin which is so ubiquitous that it keeps half the human race in fear?

How about if we approach the story of St Maria Goretti as an admonition for men to stop raping?

Yes, she appeared to her would-be rapist from beyond the grave, and yes, this moved him to remorse. But the story is not that she died “for purity.” The story is that he was a grown man who repeatedly tried to molest a child, then murdered her for resisting him, and she forgave him and appeared to him from heaven to save his sorry soul.

We might also consider her story in light of the reality of child sexual abuse. Her murderer was 20 years old. She was 12. He had been repeatedly attempting to molest this little girl before he murdered her.

I have a lot of love and tenderness toward a little girl of 12 who was murdered while fighting off her rapist. I have tremendous sympathy for a little girl who is being subjected to repeated sexual advances from her adult neighbor.

What I do not see is that she is a saint because she died rather than be raped; that the salutary tale we are to take from her story is that she died “defending her purity.” This is a view of little girls and women that has led to enormous suffering for women for millennia. In some parts of the world today, rape victims are expected to commit suicide because they have lost their “virtue.”

The truth is that the “purity” of a human being does not reside in physical virginity. It resides in a soul that rests in Christ. A woman’s “honor” is the same as a man’s honor: It is her honesty, her loyalty and her courage.

Purity is a matter of the heart and soul, not the physical things that are done to a person. A comfort woman that the Japanese raped over and over again may very well have more honor than any of the people commenting on this blog, including me. A victim of sex trafficking may have a soul so pure that it rings like crystal when she stands before the Lord, while those who claim that she is besmirched and worthless are without honor, kindness or love.

The story of Maria Goretti is a story of child sexual abuse and attempted rape that resulted in the death of a child at the hands of her attacker. The miraculous element in it comes from Maria Goretti’s forgiveness of the man who did this. It is a forgiveness that reaches from beyond the grave.

However, even this element can be completely turned on its head if we follow the way that St Goretti’s story is currently told. Can child-murdering pedophiles be forgiven?

There is no sin we can commit that is greater than God’s mercy in Christ Jesus.

Did Maria Goretti feel concern for her attacker that led her to come to him and seek his conversion from heaven?

But that is because hell is so terrible, and because this child-murdering pedophile was so dastardly that her compassion reached out to him in love in spite of what he did to her.

Maria Goretti did not die to save her murderer. She acted in love after her death to save him. Her death is not a wondrous tale of how women are supposed to value their “purity” above their lives. It is a story of how a person who is one with Christ can forgive the unforgivable, just as Christ forgave from the cross.

It is not a story to be used to exacerbate the guilt and shame of other little girls, and indeed, of older girls, who are sexually molested by adults when they are children, or who are forcibly raped when they are older.

There is no requirement on any woman to resist her rapist to the death. Getting yourself murdered because of a misogynist notion of “purity” that says that a woman’s “honor” resides in whether or not she has had sex should never be taught as an ideal to little girls.

The way that St Maria Goretti’s story has been used harms rape victims. It adds to their shame and increases their misery. It can make recovery from this horrible crime impossible.

I have had enough in my young life of my fellow Christians turning their backs on rape victims. I once witnessed a church that actually voted on whether or not to allow a rape victim to remain a member of the church.

I have known rape victims who committed suicide over this kind of attitude toward them. I knew a woman who had been raped by 5 men who, when she encountered this kind of “why didn’t you fight harder, why were you at that concert in the first place” condemnation climbed into her bathtub, put a gun to her head and pulled the trigger.

I do not care — let me say that again — I do not care if I am the only person on this planet who speaks out against the abusive use of this saint’s story to shame and blame rape victims. I will still do it.

Blaming and shaming rape victims is anti-Christ. Claims that He somehow or other regards half the people he made this way defame His holy name.

These women are Christ crucified, standing right in front of you. If you don’t get that, then you really are missing the whole point of Christ’s passion. 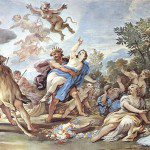 July 9, 2015 Was St Maria Goretti's Purity in Her Body? Let's Ask St Augustine.
Recent Comments
39 Comments | Leave a Comment
Browse Our Archives
get the latest from
Public Catholic
Sign up for our newsletter
POPULAR AT PATHEOS Catholic
1

Companions on the Journey Lent Week 4
We continue to travel with our brothers and sisters  who have been...
view all Catholic blogs
What Are Your Thoughts?leave a comment

39 responses to “What if We Took a New Look at the Story of St Maria Goretti?”