Over the past year, this blog received more than a million and a half pageviews, by more than 900,ooo distinct users. In the past, I’ve listed the most popular pages of the year regardless of when they were written, and I’ll mention a few from previous years later. But here is a countdown of the top 10 posts written in 2015:

For fans of Spinal Tap who were hoping the list would go up to 11, that spot would have been occupied by the post Fundamentalists and Scholarship.

Among the most visited posts written in years past – and so among the most popular posts of all time on the blog – were the ones with the cute bunnies illustrating creationism, the Red Sea chariot wheel hoax, the so-called Aramaic Lord’s Prayer, better atheist fact-checking, twenty facts about Jesus, and a really effective squirrel baffle.

Which were your favorite posts from this past year? Any personal favorites that didn’t make the list above?

Thank you as always for reading my blog!

(In case you were wondering, the #10 post had just over 7,000 pageviews, and so unless a post goes viral today or tomorrow, it is unlikely that the list would be different if I waited until tomorrow or the next day to share it. But feel free to play the prankster and try to make a post go viral, and then demand that I revise my list, if you are so inclined!) 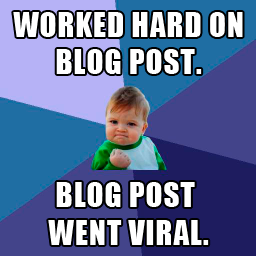 December 30, 2015 Son of God Symposium
Recent Comments
2 Comments | Leave a Comment
"African Americans are Americans, not Africans. It should not be suggested to them that they ..."
Roger Morris White Christianity and Disney Princess Theology
"It is ironic that the same people who can't let go of the Confederate past, ..."
CroneEver White Christianity and Disney Princess Theology
"Is this particular section of Jubilees preserved only in Ethiopic or perhaps Latin? It's not ..."
robrecht Was Paul Uninterested in the Historical ..."
"What actual tangible authentic and original first century originated evidence can you reference?Every word attributed ..."
rationalobservations? Was Paul Uninterested in the Historical ..."
Browse Our Archives
get the latest from
Religion Prof: The Blog of James F. McGrath
Sign up for our newsletter
POPULAR AT PATHEOS Progressive Christian
1