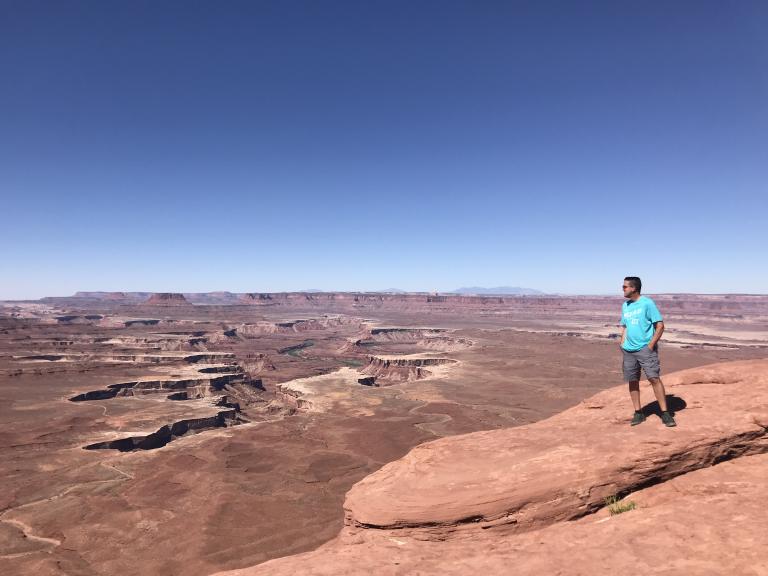 When you look at most maps, as you go to the left, you go west, just as when you look at the political spectrum, the further left you go, the more progressive you are.

In my life, I have zig-zagged from left to right to left again.

I was born in the “political west”. All of my immediate family were Democrats, my parents, and both sets of grandparents. I was born into a politically turbulent age in America–the late 60s and early 70s were years of great strife and division. I was a year old when Bobby Kennedy and Martin Luther King Jr. were assassinated–the Civil Rights Movement was at its peak–the Women’s Rights Movement was beginning to shift into high gear–The Vietnam War protests were going full steam.

My first memories are rooted in the early 70s and among them are the Watergate scandal. Of course, I was far too young to understand it but I understood enough to know that the president had done something very bad and was going to have to be punished–that made sense to a young child in 1973-74. The first election I remember much about was in the bicentennial year of 1976. I remember everywhere I looked I saw American flags and “Spirit of ’76” painted on everything from mailboxes to garage doors. That was the first year I remember following politics at all because my family was all in for Jimmy Carter. My grandfather, as I recall, worked for the Democratic Party in his county in Tennessee. I remember lots of campaign buttons and watching the election coverage, noting my family’s elation at Carter’s victory.

Here is something else you need to know about my parents and grandparents: They were all very devoted Christians who gave much in service to their churches. Both my Grandfathers taught adult Sunday School classes and served on various church boards and committees. My parents devoted countless hours to their church. They were volunteer youth group leaders throughout my entire youth. My dad would drive the church bus all over the nation taking large groups of youth to conventions from coast to coast. At the time, it didn’t seem the least bit unusual to me that my family were progressive Democrats who were vital and active participants in their churches. I don’t know if they felt strange at the time. I don’t know if they felt squeamish or uncomfortable when preachers would deliver politically conservative messages from the pulpit. I don’t know if they were forced to bite their tongues whenever their church friends would talk politics. I don’t even know if that stuff came up as much back then. But I know they are put in many uncomfortable spots now in their church circles–that much I know for sure.

As I entered the 80s as a teenager, I couldn’t be bothered by politics. I remember feeling that things seemed to be going along alright under the Reagan administration. Yet, there was always the fear of nuclear war hanging in the air, but teens have a way of pushing that sort of thing to the back burner As the 80s drew to a close I, like everyone my age, was certainly aware of the fall of the Soviet Union and, as we entered the 90s, the fall of the Berlin Wall. But other than that, during my teenage years into my early 20s I was basically an apolitical creature.

As I entered my 20s, I began to drift away from my church upbringing. I stumbled around aimlessly for about a decade. Politics meant nothing to me. At 26 I got married. A few more aimless years followed. Then in my 30s, I finally began to hone in on a career goal. With my wife’s support, I returned to school to get my degree in education.

At this same time, my wife and I joined a church. I quickly developed a new circle of friends and even became a volunteer youth group sponsor–I guess the apple doesn’t fall far from the tree. I was surrounded by political conservatism in my new situation. Slowly but surely, I was indoctrinated by the rampant mindset that a Christian is supposed to be politically conservative. I was all in. There was a period of time during that stretch of my life that I wouldn’t have even considered voting for a Democrat because it would be tantamount to a mortal sin. I had always been a hunter and a gun owner, so I fell for the NRA’s message that Democrats would never stop until they took everyone’s guns. I joined the NRA (a fact that literally makes me sick to my stomach today). I was against abortion (still am, truth be told–more on that in a moment) so it was easy for me to join in with that hate of the “baby killing Democrats”. I hesitate to admit it but, for a while, I even convinced myself to buy into Ken Ham’s Answers in Genesis “Young Earth” theory. I lived in this sort of mindset for several years. I’m ashamed to confess that I even began to question the validity of my own family’s steadfast faith. How could they be Christians AND Democrats, I wondered.

And then Mike Pence happened.

I actually owe Mike Pence a debt of gratitude for beginning to wake me up and for kickstarting my side career as a writer. When Pence was governor of my state, Indiana, he waged a war against public education. I had a new blog at that time, before it was purchased by Patheos and I began writing for them. My first blog pieces were just a mish-mash of whatever struck my fancy–nothing political. Then, with my growing impatience with Mike Pence, I decided to write a piece about him. I wasn’t prepared for the reaction that piece got–you can read it here–as it went viral. It was shared thousands of times and read many, many thousands of times. I was getting friend requests from people all over the world the wake of that piece. That led to me writing a political column and the blessing of having many other articles that have been very widely read. So, thanks Mike Pence, you scary, scary dude.

I was born in the political west, gradually moved to the east and then, thank God, found my way back to the west.

I can tell you that it feels good to be back home in the political west. There is no more estranged feeling between my family and I when it comes to politics–the Prodigal Son has returned to the fold. It feels good to be a messenger for love and inclusion. It feels good not to be associated with the party that looks after the interests of such an exclusive club. It feels good to sleep with a clean conscience.

For those reading these words who might be on a similar path, I say to you, go west young man (or woman).

If you enjoy my writing, please consider supporting it by becoming a patron. There are 3 levels of support $1, $2, or $3 per month. Each level unlocks extra content such as podcasts and videos. Also, $3 subscribers will get a personalized copy of my book sent to your home. Look for the “Support this Column” Patreon button to become a patron. Depending on the device you use, it will be on the right hand side or at the bottom of the page.

January 13, 2019
We Should All Look to Ruth Bader Ginsburg as an American Hero, But Some Can't Wait for Her to Die
Next Post