I’m reading a book called The Hidden Brain, which discusses an intriguing idea: if you see faces in nature and random sceneries, it means you have a greater connection with your unconscious brain.  After doing a little more research, I feel that pagans and witches are more likely to see faces than any one else.  Here’s why.

I love to look into forest leaves and let my mind drift.  After a moment, I can usually see a green man or woman staring back at me.

This tendency to see faces in random objects is called pareidolia.  According to The Hidden Brain, it’s an important instinct formed in our brains that when we’re very young — babies who can detect faces have a higher survival rate.  This ability is largely unconscious, and for most people, it fades into the background as they grow older.

I posit that pagans and witches have this ability more than other people for a few reasons.

2. We Believe in The Paranormal and Spirits

And pagans and witches?  We believe in spirits, for sure.  Most of us are highly sensitive to them.  Spirit work seems to be a fundamental pagan and witch practice, which can’t be said for other, more conservative religions (which are almost all of them).

Pareidolia is also common in artists.  Leonardo da Vinci wrote about seeing faces in walls.  Other artists have webpages built on their pareidolia photos, or the art they made to resemble them.

I can’t prove pagans and witches are more artistic than other spiritual/religious people, but amongst my friends, they most certainly are, by a long shot.

4. We Go Into Altered States

Pagans and witches who trance, scry, do automatic art, and practice other forms of altered states are very open to the unconscious.   We delve deep, meditating, journeying to the otherworlds, or do dream magic.  We open ourselves up to the unknown and feel it out.  That part of our brain becomes more active.  If we’re lucky, we’re somewhat more aware of the unconscious and/or that altered state even when we’re doing everyday, normal tasks.  This definitely enables us to see faces more easily.

Additionally, because many religions consider harmless altered-state activities such as meditation and yoga “the devil’s work,” pagans and witches are more likely to go into altered states than most other religions.

5. We Do Shadow Work

As witches, we face our our hidden parts.  We examine and honor the wisdom of intuition.  We also do shadow work.  It’s more than just peering into the darkness — it’s about embracing it.  People who attempt to look at their shadow will likely see faces appear more often.

Not everyone has shadow work built into their spiritual beliefs.  We’re lucky to know about it and have tools about how to reintegrate it.

Whether seeing faces happens because of who and what we are, or if it’s our ability to see actual spirits in random places, or if it’s just a flashback, it’s an interesting phenomena.

Do you see faces in random objects?  I certainly do, all the time.  I have a particularly lovely shower curtain with birch trees that shows me new faces all the time.

If you’d like, you can share your experiences of seeing faces in the comments below.  Have a blessed day! 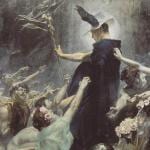 February 25, 2019
Mercury Retrograde: When Hermes Travels The Underworld
Next Post 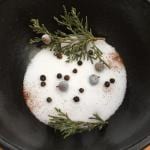