“How To Free Your Inner Goddess!”  “You Are A Goddess!”

Lately, I’ve seen a lot about of buzz on the internet about my “inner goddess” and how to unleash her or embody her.

This phrase appears to have increased after it was featured in the “Fifty Shades of Gray” books and movies.  It’s well known that the author of those books promoted a very wrong kind of BDSM–and it appears she advocates for a wrong kind ofpaganism as well.

While I believe the authors of the numerous “inner goddess” books and articles have good intentions, this kind of talk of having an “inner goddess” or being a goddess is confusing.

As a polytheistic pagan who has had actual experiences with gods and goddesses, I’m absolutely certain that I am not a goddess.  Moreover, there is no goddess who lives within me.

In my opinion, we are not the gods.  The gods are the gods.  We are human beings, with human spirits, and that’s good enough.

There’s an “inner goddess” market out there that’s not connected with paganism or occult traditions.  These people have created a niche market where they are the way-showers and the only ones to have all the answers—for a price, of course.

Their courses, articles, and books have created a new age pagan tradition, along with a learning curve which they can capitalize upon. They ask and answer questions, such as who is your inner goddess?  How do you awaken her?  How do you unleash or “unf%*k” her?  What does she want you to do?  How can you work with her?

Just read the book, take the class, get the coaching sessions, and come to the retreats, of course!

When these messages link products and promises of becoming more fabulous and getting what you want, it’s especially transparent that it’s a way to create a feeling of lack in order to sell something that will fix the lack.

The Perfection Complex Of Having An “Inner Goddess”

A simple google search revealed way more results for “inner goddess” than “inner god.”  This could indicate that the women’s reclamation movement is more active than the men’s (and rightfully so), but it also brings up the fact that women are often expected to live up to perfectionist standards.   Society has trained women to fall prey to ploys that kindly attack them, like a backhanded compliment that confuse them and make them feel bad about being a human being.

To be fair, not all of the inner goddess material is associated with physical beauty, but much of it is.  If it were an advertising campaign, it’d be criticized for its lack of diversity in the categories of age, weight, ethnicity, race, and more.  The models and drawings who are used to deliver the message look like dolls or airbrushed, heavily made-up women.

Do you want to guess which pagan goddess is most associated with inner goddess searches?  It’s Aphrodite, of course, the ancient Greek goddess of beauty and love.  While Aphrodite can be seen as the goddess of self-love (as I see her), she is also often seen by some people as the personification of bodily perfection and sexual desirability–in other words, external approval.

The inner goddess messages get especially supernatural with the impetus of having an “inner goddess glow” or the notion that you should be able to “light up the dark.”  Wait–your skin doesn’t do that?  Well, you’d better do even more work to achieve that too.

I realize that some of the inner goddess messages are accompanied with helpful themes about self-love, self-care, creating sacred spaces, healing, getting more from life, realizations, taking care of one’s body, being creative, etc…

Those are really great practices—for humans.

The gods don’t need self-care.  Goddesses don’t need to do yoga.  They don’t buy products to get their glow.

So while the campaign could be seen as empowering, it also appears to put additional pressure on women to live within yet another set of expectations that look remarkably similar to our own sucky societal standards.

I believe we’re not the gods.  We’re humans.  We do very human things, like make mistakes, go to the bathroom, grow old, have bad days, and look tired at the end of a long night.

The gods don’t do any of those things, as far as I know.

Add in the libido as the “inner goddess,” as the 50 Shades of Gray author did, and you could have a recipe for a lot of confusion.  The book’s “inner goddess” concept was criticized by the public, as the main character’s consent appeared to be compromised or conflicted much of the time.  As in she didn’t want to do something, but she did it anyway.

With conflicting advice from two or more different sets of knowledge and wisdom, the “inner goddess” could deliver confusing messages.

What happens when we believe we have a piece of perfection inside of ourselves, and it makes a mistake?  I feel as if it’s a set-up for more confusion and possibly to receive more counseling or advising.

What To Do Instead

As a polytheistic pagan, I feel the gods don’t want us to be them.  I think the gods really want us to be our most empowered selves, and if we’re inspired by them, great!  This may be the underlying message of these inner goddess memes, but if so, the it gets lost in context.

If this practice works for you, I think that’s great.  By all means, keep using whatever works!

If it makes you feel both better and worse, question what’s really happening.  You may be confusing external approval for internal approval.  If you’re shelling out a lot of money to find out who your inner goddess is, question that too.

Another approach to the “inner goddess” would be to ask yourself what your favorite deity would want for you.  For example, Venus may want to you luxuriate in self-care and good food.  Athena might want you to create the thing that is in your mind.

Still another approach is to listen to your intuition and/or your higher self and find the wisdom there.

If people are bent on using this language metaphorically, they could use words to clearly state that.  For example, “You’re strong, like a goddess,” or “find your inner goddess-like essence.”

Note: This article was edited to restate my point—I’m worried about the use of fear-based tactics in conjunction with pagan concepts in order to sell a new age concept that may not be truly empowering. It was also edited to state that these are my opinions as a polytheistic pagan, especially after learning the Left-Hand Path tradition and theurgical traditions have somewhat similar concepts.  I meant no harm to those practitioners, and the criticism in this article is not directed at their tradition or practices. It was also edited to remove my opinions about what the gods can and can’t do—this isn’t my call, and I do not wish to gatekeep.  The gods will do what they will.

This article was also edited to add the associations of the “inner goddess” with the 50 Shades of Gray books.

About Astrea
Astrea is the author of Intuitive Witchcraft: How To Use Intuition To Elevate Your Craft, as well as the forthcoming book Air Magic: Elements of Witchcraft Volume 2 (Llewellyn Worldwide). She also leads the fire dancing group Aurora Fire and stirs up magic for the Blessed Be Box, the service that ships a "ritual in a box" for new moons and sabbats. You can read more about the author here.
Previous Post 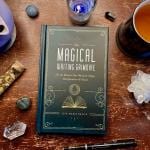 September 28, 2020 Feel The Change You Wish To See In The World
Recent Comments
0 | Leave a Comment
Browse Our Archives
Related posts from Starlight Witch