Rod Dreher, Saint Benedict, and the Case of the Ignorant Secretary 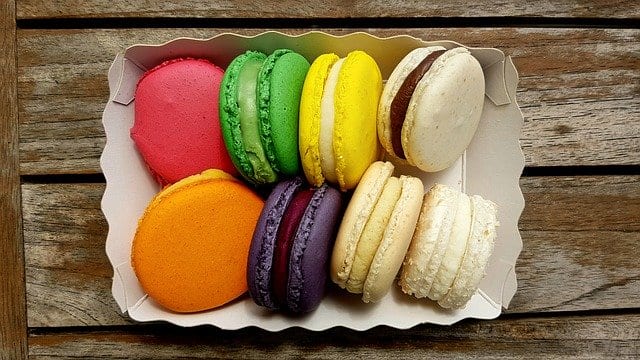 People are still up in arms about Chick-fil-A. Conservative Christian commentators are furious. Rod Dreher may or may not have come to the end of his tantrum, but it lasted for over a day and something more than six thousand words. Yesterday, he shared the following true life story on Twitter– and remember, this is about a chain of fast food restaurants deciding to donate to another homeless shelter and give enormous amounts to local food banks rather than giving to the Salvation Army and the League of Christian athletes. That’s the betrayal he’s describing. 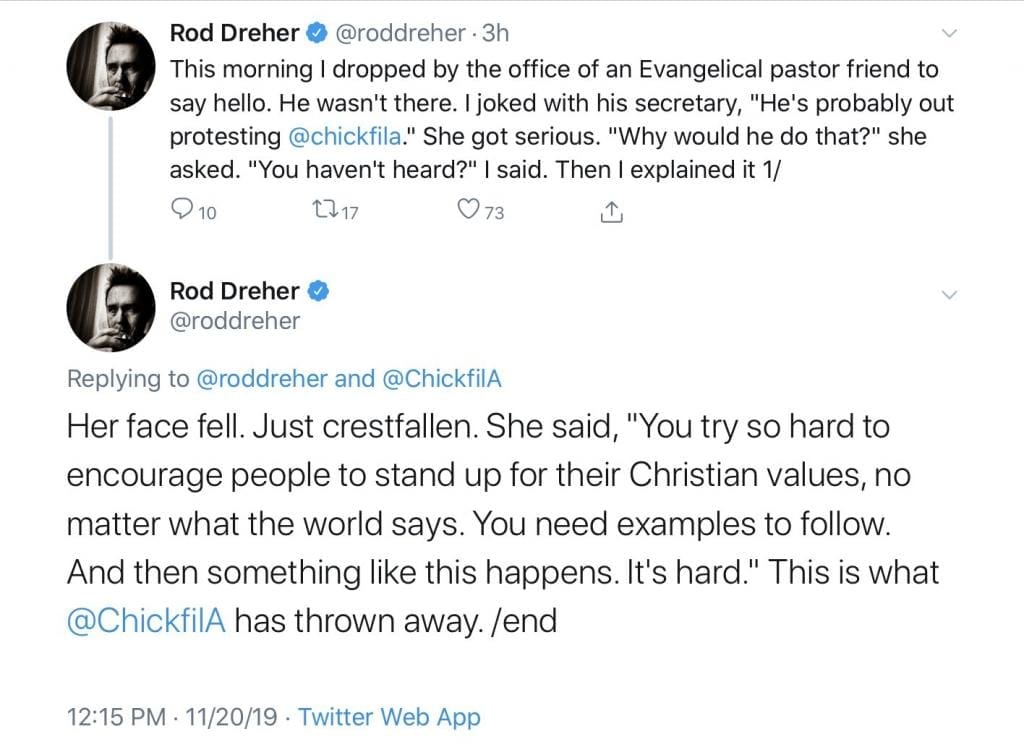 “This morning I dropped by the office of an Evangelical pastor friend to say hello. He wasn’t there. I joked with his secretary, “He’s probably out protesting Chick-fil-A.” She got serious. “Why would he do that?” she asked. “You haven’t heard?” I said. Then I explained it. Her face fell. Just crestfallen. She said, “You try so hard to encourage people to stand up for their Christian values, no matter what the world says. You need examples to follow. And then something like this happens. It’s hard.” This is what Chick-fil-A has thrown away.”

I am 100% confident that this is a perfectly credible account of a real story of a true thing that actually happened. And spare a thought for that poor secretary who apparently lives chained to the radiator in the church basement with no internet, no television, no phone and no contact with her fellow Evangelical Christians, yet still knew exactly what Chick-Fil-A was and that they had been making donations to the Salvation Army and the League of Christian Athletes. Because that’s the only way that she could have been completely ignorant about the Chick-fil-A story until a famous conservative Christian internet personality happened to drop by and break the news. Maybe someone should do a well check. I’m sure Dreher can readily provide her address since this story is in no way made up.

Thankfully, after about 24 hours, he seems to have gotten over his betrayal and gone out to do a spot of shopping; last I knew he was wondering whether the macarons at Costco are as nice as the ones at Laduree.

For those who don’t remember, the notion that it’s a betrayal to give generously to food banks and a homeless shelter instead of fighting a culture war is characteristic of Dreher’s odd notion of Christianity. He’s known for saying incredibly nasty things about how horrible poor people are, and seems to take it as a given that all Christians want to shun them as eagerly as he does.

I always find it intensely puzzling that such a man named his book after a saint famous for asceticism and giving lavishly to poor people, even when this left his monastery at risk. When I was a little girl, I loved the story about the time Saint Benedict’s monastery was visited by a poor man, begging for a loaf of bread for his starving children during a famine. It’s been a long time, but as I recall from reading it in the Tan book, the story went like this: Benedict was so generous that he presented the man not with one just loaf of bread, but with a loaf for him and one for each child as well. The man was embarrassed at this; he thought he’d be responsible for monks starving to death by taking them, but Saint Benedict insisted. Halfway home, the man turned around and went back to the monastery to return some of the bread. But when he got there, Saint Benedict showed him that an anonymous benefactor had donated several fresh loaves of bread to the monastery and then vanished. This sort of thing was always happening to Saint Benedict. Maybe it would happen to all of us if we decided to turn away from the world and to live the Gospel– not the Right Wing or the Left Wing or this or that Christian guru who wrote a book, but the Gospel.

I’m not saying that I’m like Saint Benedict either. I’m not. I’m as fond of luxuries as anybody else and probably worse than most. I complain about my shabby neighborhood all the time, and if I were suddenly wealthy I’d certainly love to to move somewhere nicer, right after I went to Laduree for macarons. A fondness for really nice macarons is one thing Dreher and I agree on.

But I do recognize that to a great extent, Christianity in America has been hijacked. There are an extremely large number of privileged and loud people who have decided that being a Christian is about sticking it to the libs and scoring ideological points against people who sin differently than they do, instead of the Gospel and instead of repenting of their own sins. And they don’t see that they’re conforming themselves to the world by allying themselves so firmly in one or another camp that the world recognizes instead of being Christian.

I think that what Christians ought to be doing is orienting ourselves back to the Gospel– not trying to pretend Christianity can fit in with any faction that the world recognizes, not fleeing the world for some kind of intentional community we only leave to drop in on our imaginary Evangelical friends and buy macarons, not getting crestfallen when this or that corporation designed to make money does something new with its money, but living in the world as Christ did and trying to as much good as we can for all the little Christs, all the human beings who bear His image, we encounter in it.

I’m not good at that, at all. But I would like to repent and be converted. That’s something I’m working on.

My longtime readers know that I usually give them a challenge during the Advent season. Advent is just around the corner; in the Eastern churches I miss so much, it’s already begun. I just want everyone to make a resolution, this advent, to disregard the talking heads, conscientiously object to the so-called culture war, and try to be Christian to people– and the more helpless a person is, the more careful I want you to be to fulfill the Great Commandment and love them as yourself.

For example, I already said I’m going to bring a meal to The Friendship Room as soon as I can. I’m also going to put together a really nice Christmas present for a homeless person, if our finances permit, with something in it I’d like to have myself. I know they need warm winter clothes and you all know I love scarves, so I was thinking that I’d order my favorite kind of warm pashmina and send it to to the Friendship Room to give away to a woman who doesn’t have anything nice for winter. That’ll be my beginning, my version of giving away several loaves of bread like Saint Benedict. Maybe I can even learn to make macarons for people.

Let’s all of us be attentive and find things like that to do.

Let’s stand up for real Christian values, the kind you’ll find in the Gospel. 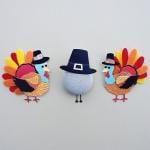 November 21, 2019
A Quick Request for Turkey Time
Next Post

November 24, 2019 The Highest Majesty of God
Recent Comments
0 | Leave a Comment
Browse Our Archives
get the latest from
Steel Magnificat
Sign up for our newsletter
POPULAR AT PATHEOS Catholic
1