Just last week I participated in a panel of guests discussing religion and advocacy in the current political climate. This sort of experience is not that unusual for me, especially in these difficult days. What was unusual for me were some of the details of the gathering, details that were definitely out of my usual experience.

For example, the evening was held in a very trendy new art gallery in a gentrifying part of Harlem. The walls of the gallery were covered with a modern art installation; the lights were neon in some places and low and dramatic in others. The evening’s food was prepared by a trendy vegan caterer, and the folks milling around with glasses of wine seemed edgy and very, very hip. I quickly realized I was the only pastor on the panel, and it soon became clear that I was likely one of a small handful of people of faith in the entire room.

The several hundred people who were there hadn’t given much recent thought to religion at all, I could soon tell, and many seemed to be struggling to understand why they were there at all. I could see and hear their curiosity and their distrust; I knew many of them lived secular lives in which religion never factored with any regularity.

This was not my normal crowd.

Still, the discussion was lively and the dialogue polite and interesting. As the panel discussion wound down the moderator asked each of us four panelists to share a word of advice. “If people could do anything in response to what they’ve heard tonight, what would you suggest?”

Immediately I knew what I wanted to say. “When I go to a party with people I don’t know and the conversation turns to what I do for a living,” I began, “it always seems to be a party killer when folks find out I’m a minister.” There may have been a few amused chuckles, but most of the heads around the room nodded in recognition. “For those of you who are not part of a faith community and who don’t even know anyone who is, reach out. Get to know someone different. Do something you wouldn’t normally do — attend a service or program at a local house of worship. Make yourself uncomfortable.”

As I was leaving that night several people came up to me and promised they would try to do what I suggested. “I’m not interested in attending a worship service,” one woman said, “but I’m willing to be uncomfortable more often so I can begin to appreciate the perspective of someone who does.”

On the way home that night I started to think about how brave that response was, and I started to wonder about my “normal crowd.” I was thinking of all the nice, polite people of faith whom I know — people who attend church most Sundays, who make casseroles for sick people, who volunteer on church committees and at Vacation Bible School. They’re lovely people who believe in being kind and fair. They live in school districts with low rates of racial and economic diversity because they want the best schools for their children. While the principle of diversity is something they’d defend, they are most comfortable in religious and civil groups filled with people who look like they do. And, while they care very deeply about the problems we face in society, they are busy with carpool and soccer practice and committee meetings and making a living and keeping their marriages together and all the day-to-day challenges of life.

Like me, those folks would feel a little uncomfortable in a funky art gallery in Harlem surrounded by people who haven’t thought of darkening the door of a church in years.

But I got to thinking, if “my crowd” asked me to share a word of advice, some action they might take in response to such a contentious and divisive political climate, I would tell them the same exact thing I told the folks at the panel discussion the other night. “Get to know someone different. Do something you wouldn’t normally do — attend a protest or town hall meeting. Make yourself uncomfortable.”

The divisiveness in our country has only gotten deeper and more bitter at the hands of our elected officials these past four weeks. They have proven repeatedly that they cannot or will not help us heal the differences that divide us. We’re going to have to do that ourselves, and we can only do that by stepping into situations that feel new and even strange to us, by meeting people who see the world differently than we do but who share our hopes for peace and justice.

We can only do that by making ourselves uncomfortable. 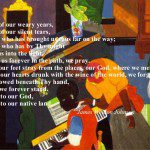 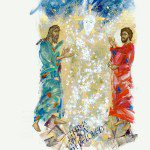