… Working on tomorrow’s segment for The Catholic Five, I’ve included some links and commentary for your reference below.

————-
The Catholic Five on Facebook, on Twitter, catch the live recording Saturday July 18th at 11EST or watch the playback later.

During this week’s first recording I’ll be commenting on the recently released video by the Center For Medical Progress that shows Planned Parenthood’s Senior Director of Medical Services, Dr. Deborah Nucatola, describing how Planned Parenthood sells the organs and parts of aborted babies and admits to using partial-birth abortions to supply intact body parts to research laboratories.

You can watch an edited 8 minute clip here and the full two+ hour unedited video here. Also for reference, see my original post on the day the story broke with lots of commentary and updates. 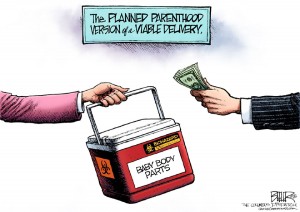 Planned Parenthood responds with this statement and a video from PP President, Cecile Richards.

I think it’s important to note that PP doesn’t deny the allegations or even claim any wrong doing. At most we get an non-apology for the “tone” of one their senior doctors, whose been reduced to “staff member” status in the video.

And to illustrate how compassionate, not at all vile and ghoulish, Planned Parenthood is they decided to launch their own Twitter campaign in retaliation for #PPSellsBabyParts. The following day Planned Parenthood began promoting their own trending hashtag, #PPShoutYourStory. The idea was to deflect from all the accusations of baby killing by…uh… celebrating baby killing.

Which, to no one’s great shock and surprise, was a total PR damage control failure.

I’ll also be discussing some of the defenses I’ve been reading in support of Planned Parenthood’s actions. Several liberal media outlets have taken to the notion that PP has done nothing wrong, claiming the aborted baby parts were donated by their patients and the organs are used to cure cancer, create vaccines, grow bionic organs for transplants, and create a magical breed of one horned flying horses.

There’s even a commemorative coin conspiracy theory floating around Yahoo. There’s not enough tin-foil in the world. 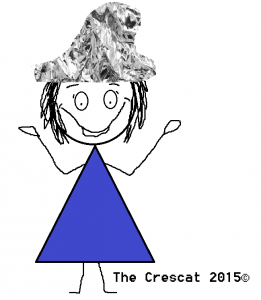 Some questions I’ll be going over …

So what about those magical cure all the things baby organs? I reached out to Rebecca Taylor, a molecular biologist, who blogs over at Mary Meets Dolly for her opinion on the matter. She referred me to some helpful links.

And why did it take an entire year for the CMP to release the video? On Thursday I reached out to CMP but at this time have not received a reply.

Bobby Jindal was the first to announce an investigation into Planned Parenthood, followed by Ted Cruz making the effort, and lastly Congress. But really, who expects Congress to conduct a fair investigation in light of how many members actively support and donate private funds to PP?

What about Stem Express? We learned from Breitbart that they were one of the companies known to purchase aborted baby organs from Planned Parenthood [See their promotional flyer here]. When the news broke their website disappeared, as did their facebook page.

How does Planned Parenthood get consent from their patients? Do they inform them of the increased medical risks involved in organ harvesting – inducing labor, positioning the infant in the breech position, delivering all the baby through the birth canal, and then crushing the baby’s head to preserve the choicest bits. How do they word that in the consent form?

“May we increase your risks during this procedure so we can salvage as much as we can of your baby for donation purposes to help us save a few bucks on disposing of their dead body? Circle one. Yes or No.”

Wrapping my segment up, I’ll discuss some glaring ironies, the first most obvious one being that Planned Parenthood has long fought hard against any legislature that would require women to have an ultrasound during their abortion. However, in the video you can clearly hear Dr. Nucatola discussing how they can use the ultrasound to their advantage to ensure they can crush the baby’s head just right and not damage any of the harvested viable organs.

Speaking of “viable” organs. I thought all the “medical byproducts” of abortion were just clumps of cells and squishy tissue. If the organs are developed and viable enough for donation shouldn’t that tell you something about the development of the partially born baby being aborted?

Can we really continue to use the terms “clumps of cells” and “tissue” when a medical doctor can casually refer to her merchandise as “hearts”, “livers” and “limbs?”

But my favorite has to be Planned Parenthood’s attempt to discredit the Center for Medical Progress by referring to them as a “financially backed for profit” organization.

I don’t exactly see Cecile Richards struggling for funds, on the contrary, democratic members of Congress have been making it rain for PP lately. And $100MIL from Warren Buffet. I don’t think Planned Parenthood wants to start using the amount of funds a company has as a barometer for integrity any time soon.

And lastly, we all know if this sting operation had involved the sale of puppy parts every single person implicated would be in jail this very minute.