FOREVER on the lookout for things he regards as harmful to Hinduism, Nevada-based Rajan Zed went on the offensive when he discovered that a farm in the UK had launched yoga lessons in a field full of cows.

Lancashire Farm Dairies (LFD) had announced plans to hold regular classes among its herd and even produced a promotional video.

But it quickly cancelled the lessons when Zed, President of Universal Society of Hinduism, spearheaded a protest by Hindus, saying that the cow, which is sacred and had long been respected in Hinduism, should not be used as prop for human entertainment.

Zed also pointed out that this idea seemed to be diluting the profound, sacred and ancient discipline of yoga.

LFD has now apologised for offending the religion.

In an email to the Zed,  Jack Morrison, Brand Manager at LFD, said:

We can only apologise if the recent fitness activity has caused offence, as you can imagine this wasn’t our intent … there will not be further events.

Zed said he was grateful to the company for backing down, but suggested  that that companies like LFD should send their senior executives for training in religious and cultural sensitivity so that they had an understanding of the feelings of customers and communities when introducing new products, organising events or launching advertising campaigns.

We last reported on Zed’s antics in July when he targeted a Belgian beer company.

In 2017, Zed had a major run-in with Meat and Livestock Australia (MLA) over an amusing commercial for lamb that featured Jesus and mythological deities including Lord Ganesha, above.

The controversy escalated politically when the Indian government complained about it. In a statement, the Indian High Commission said the MLA advert was “offensive” and:

Hurt the religious sentiments of the Indian community. The consulate general of India in Sydney has taken up the matter directly with MLA and urged them to withdraw the advertisement. A number of community associations have also registered their protest with (the) government of Australia and MLA.

Very disrespectful and highly inappropriate …  Hinduism is the oldest and third largest religion of the world with about 1.1 billion adherents and a rich philosophical thought and it should not be taken frivolously. Symbols of any faith, larger or smaller, should not be mishandled. 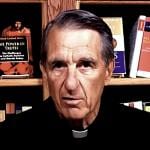 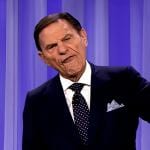 August 21, 2020 Kenneth Copeland thrown over by TBN for a younger, prettier model
Recent Comments
0 | Leave a Comment
"Has "Hermann Göring" or "Josef Goebbels" signed the petition yet?"
Michael Neville Plague rat pastor claims court ordered ..."
"Perhaps we should send in the police.https://www.samoapolice.ws/..."
Vanity Unfair Schoolboy in frock? Yuck! Christian couple ..."
"Evidently, he seems convinced his religiosity trumps the rule of law. At the end of ..."
ORAXX Plague rat pastor claims court ordered ..."
""sacrifices..., which have included giving up her teaching career"So then, it seems we can call ..."
Moonbat Humanist Schoolboy in frock? Yuck! Christian couple ..."
Browse Our Archives
get the latest updates from
The Freethinker
and the Patheos
Nonreligious
Channel
POPULAR AT PATHEOS Nonreligious
1