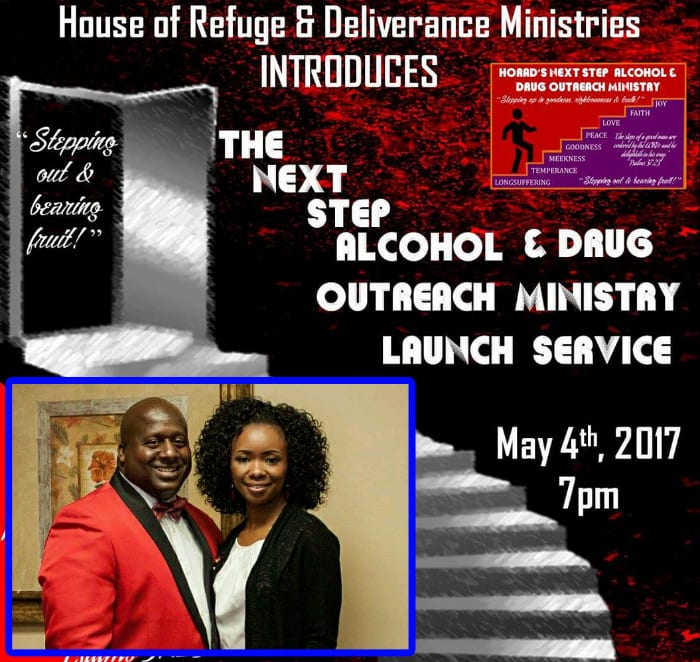 IN 2017 the Facebook page of the House of Refuge & Deliverance Ministries in Mayflower, Arkansas – operated by pastor Lloyd Eddie Lasker and Elect Lady Stella Lasker (inset) – featured the poster above.

Yesterday it was reported here that police – searching for Lasker in connection with the alleged abuse of a 21-month-old child injured in an exorcism at the church in which methamphetamine was used – arrested the the pastor outside a gas station.

Authorities reportedly found about four grams of meth and a glass pipe in his truck, registered in the name of the church.

Because he was on probation and had an active search waiver filed against him, authorities also went to Lasker’s residence, where, according to this report, they found multiple firearms, ammunition and “boxes for pipes that are used for methamphetamine.”

After police searched his home, an affidavit states Lasker was questioned by detective Brittani Little.

Little launched an investigation against Lasker following a September 18 welfare check request. The request concerned a toddler who was at the House of Refuge and Deliverance church in Mayflower with his mother and Lasker on the day in question.

When the officer responded, she noted the child had:

Multiple bruises from head to toe and was life threateningly emaciated.

The child’s mother claimed the child:

Was possessed by a demon.

The boy, who suffered “a brain bleed and extreme malnourishment, was taken to a nearby hospital and admitted into the ICU on Sept. 18,” according to a search warrant affidavit.

When questioned by the detective on September 22, the pastor admitted he had performed exorcisms on the child. He also said he had “used meth in the church several times,” including with the mother of the injured  child and “many other members in the church.”

Lasker told police it “would be likely” they would find methamphetamine residue at the church and that “some of the attempted exorcisms occurred at 748 Highway 365 [the church].”

Subsequently authorities located a baggie with methamphetamine residue in the church.

Lasker is currently free on a $7,500 bond in the drug case that was filed against him on Sept. 24.

September 29, 2020
US anti-abortion fanatics are now targeting clinics in the UK
Next Post

September 30, 2020 Leading Irish atheist wades into the Dawkins disinvitation row
Recent Comments
0 | Leave a Comment
Browse Our Archives
get the latest from
The Freethinker
Sign up for our newsletter
POPULAR AT PATHEOS Nonreligious
1