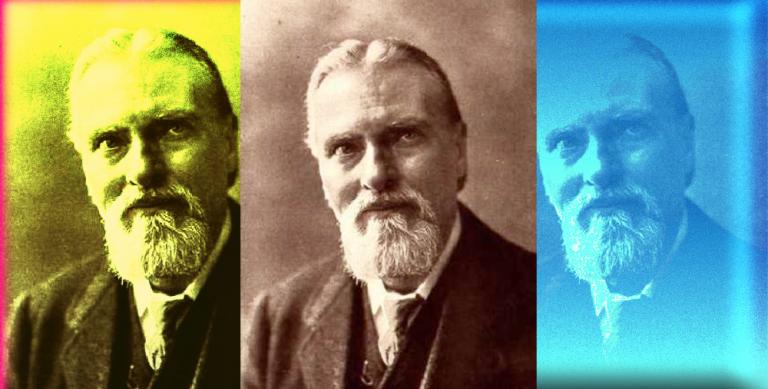 TONIGHT I decided to launch a new series that examines current news items and applies relevant passages to them written by the founder of The Freethinker, G W Foote, above, almost 140 years ago.

What better way to start than with the role Amy Coney Barrett – Trump’s pious pick for the Supreme Court –  played in yesterday’s SCOTUS decision to block COVID-19 restrictions on religious services in New York state?

As coronavirus cases surge again nationwide the SCOTUS late Wednesday barred New York from enforcing certain limits on attendance at churches and synagogues in areas designated as hard hit by the virus.

The justices split 5-4 with new Justice Amy Coney Barrett in the majority. It was the conservative’s first publicly discernible vote as a justice. The court’s three liberal justices and Chief Justice John Roberts dissented.

The move was a shift for the court. Earlier this year, when Barrett’s liberal predecessor, Justice Ruth Bader Ginsburg, was still on the court, the justices divided 5-4 to leave in place pandemic-related capacity restrictions affecting churches in California and Nevada.

In an unsigned opinion the court said the restrictions:

Single out houses of worship for especially harsh treatment. Members of this Court are not public health experts, and we should respect the judgment of those with special expertise and responsibility in this area. But even in a pandemic, the Constitution cannot be put away and forgotten. The restrictions at issue here, by effectively barring many from attending religious services, strike at the very heart of the First Amendment’s guarantee of religious liberty.

Governor Andrew Cuomo dismissed the decision as  “irrelevant” and said that court’s conservative majority took the opportunity to make an ideological point.

The news had the Christian press rubbing its hands with glee.

Not so much the Christian Medical and Dental Association (CMDA) which today (Thurday) said that churches  should not “become an idol” and that places of worship should pause in-person meetings in order to slow the spread of the coronavirus.

Over to you, Mr Foote:

Astronomy was opposed by the Church because it unsettled old notions of the earth being the centre of the universe, and the sun, moon, and stars mere lights stuck in the solid firmament, and worked to and fro like sliding panels.

Did not the Bible say that General Joshua commanded the sun to stand still, and how could this have happened unless it moved round the earth? And was not the earth certainly flat, as millions of flats believed it to be? The Catholic Inquisition forced Galileo to recant, and Protestant Luther called Copernicus ‘an old fool.’

Chemistry was opposed as an impious prying into the secrets of God. It was put in the same class with sorcery and witchcraft, and punished in the same way. The early chemists were considered as agents of the Devil, and their successors are still regarded as ‘uncanny’ in the more ignorant parts of Christendom.

Roger Bacon was persecuted by his brother monks; his testing fire was thought to have come from the pit, and the explosion of his gunpowder was the Devil vanishing in smoke and smell.

Even at the end of last century, the clergy-led mob of Birmingham who wrecked Priestley’s house and destroyed his apparatus, no doubt felt that there was a close connexion between chemistry and infidelity.

Physiology and Medicine were opposed on similar grounds. We were all fearfully and wonderfully made, and the less the mystery was looked into the better. Disease was sent by God for his own wise ends, and to resist it was as bad as blasphemy. Every discovery and every reform was decried as impious. Men now living can remember how the champions of faith denounced the use of anaesthetics in painful labor as an interference with God’s curse on the daughters of Eve.

And to prove his point, here’s a comment posted below the CMDA report by one Thomas Logie:

We are instructed in Hebrews 10:25 ‘not to forsake the assembling of ourselves together, as is the manner of some.’ This is not to say that every person needs to attend every service and to take no account of his or her risk of spreading or acquiring any communicable disease. COVID-19 is not like bubonic plague around 1350. For those under 70, the death rate is less than .5%.

It would make sense to have mobile mini-services for those who feel that they should not attend by reason of any risk factor, but why shut down worship services completely? Why not rather assemble to plead with God for mercy to lighten this epidemic as part of the worship service?

Note: Foote’s words are contained in Arrows of Freethought (1882).

November 27, 2020 Loathsome Eurosceptic Nigel Farage attacks C of E & PM Johnson
Recent Comments
0 | Leave a Comment
Browse Our Archives
get the latest from
The Freethinker
Sign up for our newsletter
POPULAR AT PATHEOS Nonreligious
1