Op-ed: There is nothing new about cartoons which mock religion

Op-ed: There is nothing new about cartoons which mock religion April 9, 2021 Bob Forder

IN recent weeks there’s been another furious response to the use of Muhammad cartoons – this time in an educational setting, at Batley Grammar School in Yorkshire.

There is nothing new about cartoons being used as a device to poke fun at the religious. They have been a contentious source of blasphemy prosecutions and allegations ever since technical developments enabled their mass print production.

An early example is Leo Taxil’s La Bible Amusante, which satirised what Taxil regarded as biblical inconsistencies and absurdities. G W Foote latched onto the cartoons in this book when he founded The Freethinker in 1881. 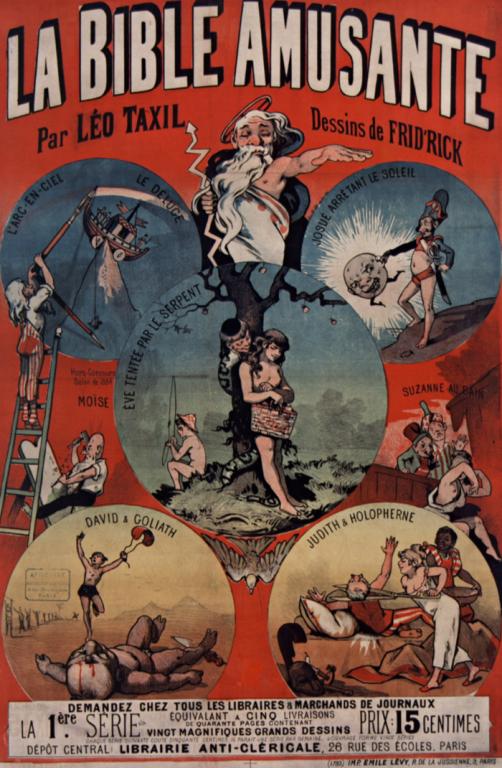 He would undoubtedly have been encouraged by efforts to have Taxil’s book banned in this country. From the outset Foote republished some of the cartoons as Comic Bible Sketches, although they were supplemented by others.

More than anything else it was cartoons that made The Freethinker notorious and the reason the newspaper was such an immediate success in terms of its circulation.

At the same time, the leading US freethought newspaper The Truth Seeker was publishing Watson Heston’s cartoons (example below), which satirised biblical passages and celebrated US secularism and secular heroes like Thomas Paine. 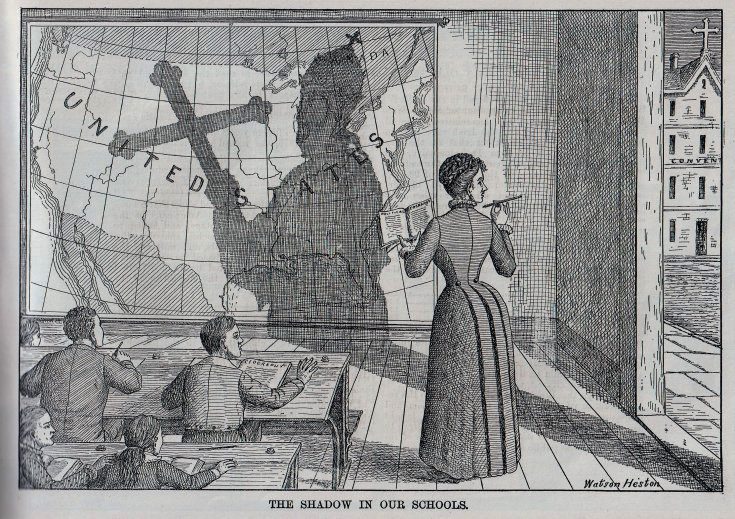 These were later collected together in books such as The Bible Comically Illustrated and The Freethinkers’ Pictorial Textbook. These caused quite a rumpus, although little is known about Watson Heston.

Both D M Bennett (who founded The Truth Seeker) and Foote were clear about the purpose of their cartoons. They reasoned that if you laugh at priests or ministers you can’t take them seriously and they therefore lose authority. He had a point – and the same could be said for imams as for priests. I think this accounts in large part for the furious response in Batley.

Foote was eventually prosecuted for blasphemy (partly for the special 1882 Christmas number of The Freethinker, which was a cartoonists’ feast). 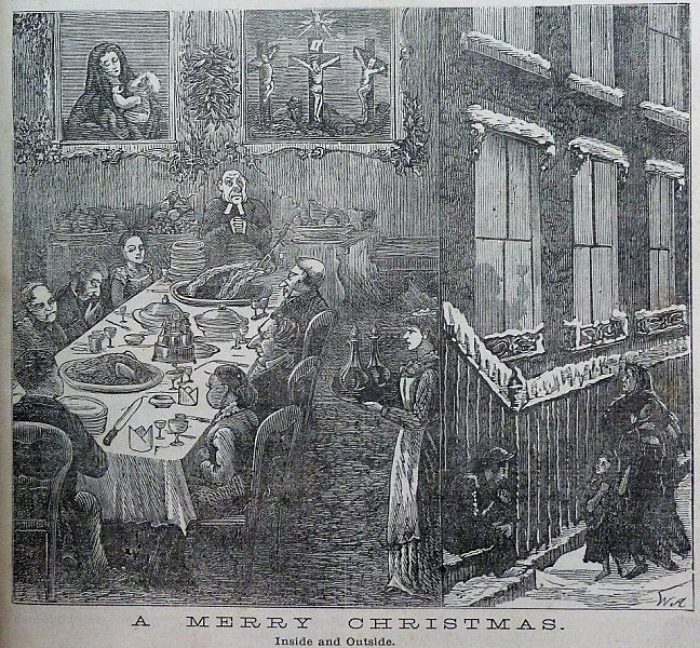 I include a copy of the cartoon from the front page, above. Other contents included a cartoon strip “A new life of Christ” and a particularly contentious cartoon “Moses getting a back view” with a quotation from Exodus “And it shall come to pass that I will put thee in a clift of the rock, and I shall take away my hand, and thou shalt see my back parts”.

The cartoon features a rather startled Moses staring at a pair of well-filled check trousers with a tear in the rear. None of this has me rolling around with laughter, but I can understand the furious response provoked in 1882 – and Foote’s courage in publishing them. 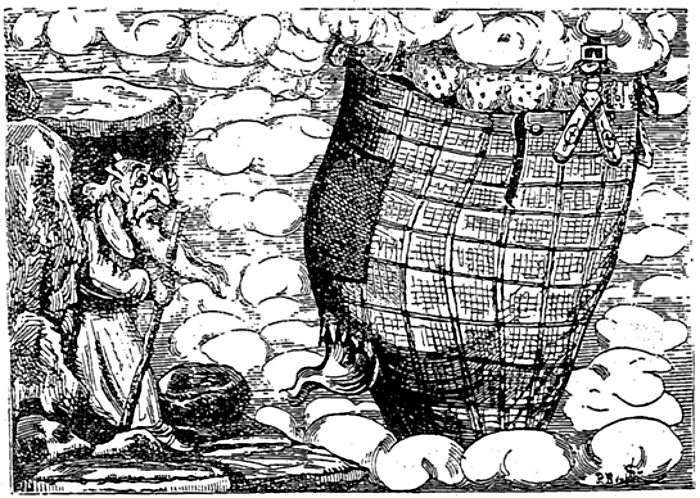 Foote got a year in Holloway Gaol and was widely regarded as a hero and martyr in National Secular Society circles. It was this that ensured he became president when Charles Bradlaugh – the NSS’s founder – resigned in 1890.

The Charlie Hebdo cartoons were published for similar reasons and are part of the same tradition.

There is, however, a significant difference between now and then. Those who objected in the 19th century were largely part of an elite which held a privileged position in society as a whole, embodied and supported by the established church. In some ways those demanding retribution in Batley can be considered amongst the least privileged in society and, for them, this is an issue tightly linked to their ethnicity and sense of identity.

This makes the issue far more complex and helps explain the disappointing woolly thinking, platitudes and fudge about the need to engage and listen that has crept in amongst what might loosely be termed the liberal left. But those condoning the dangerous and over-hasty behaviour of the Batley Grammar School governors and management really need to think again. 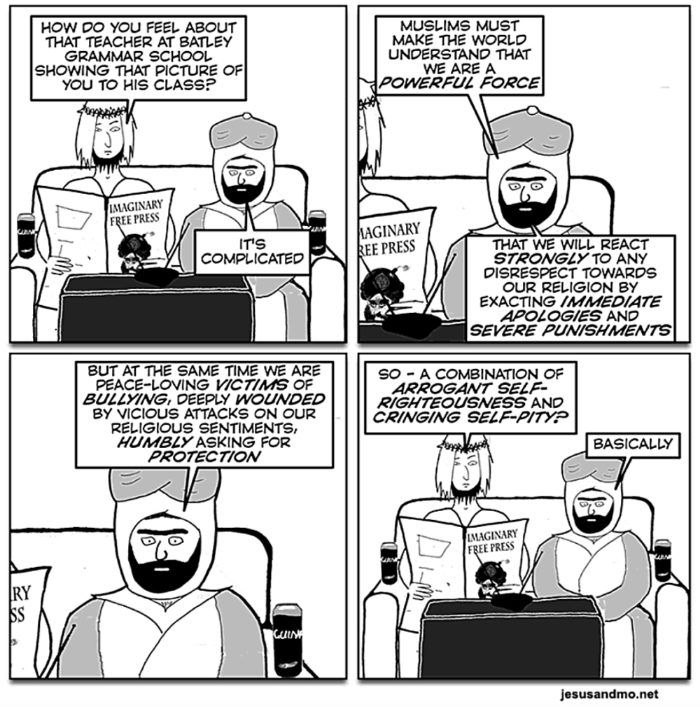 Secularism is a fundamental liberal democratic principle. The strength and success of liberal democracy rests not only on principles such as fair elections but also on the assumption that the political system accommodates all religions and beliefs with equal respect and access, apart from those intent on its overthrow.

A failure to understand this, and the freedom of speech it entails, is the real threat to us all, particularly the less privileged. Freedom of speech must entail a right to offend, however regrettable this might seem.

Sadly, the array of religious and community leaders (some self-appointed) assembled outside Batley Grammar School purport to represent a less privileged community. But giving in will simply enhance and protect these leaders’ own status and position within their community, at others’ expense, and run the risk of that community becoming further isolated from society at large.

Editor’s note: Bob Forder is a member of the National Secular Society Council, and this piece, first published by the NSS yesterday, is reproduced with the author’s permission.

The Freethinker is able to continue the tradition of lampooning religion with irreligious cartoons created by California-based atheist artist Shell Fisher, whose work appears periodically in reports on this site, and weekly in The Freethinker Bulletin. 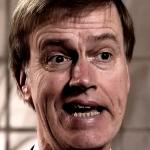 April 10, 2021 Catholic Church stunned by trans woman yearning to be a nun
Recent Comments
0 | Leave a Comment
"Absolutely!1. Did you see what it was wearing? Barely anything!2. Jesus was so nice to ..."
The_Schwa ‘No gratuitous violence in the Bible, ..."
"Sometimes, I really wish there were a hell for people like this.For some believers, I ..."
Lark62 ‘Rev Ernest Angry’ is ‘in heaven ..."
"I'd like to hear a serious, critical defense of the treatment of the Unnamed Concubine ..."
Nica ‘No gratuitous violence in the Bible, ..."
"https://pbs.twimg.com/media..."
Michael Neville ‘Rev Ernest Angry’ is ‘in heaven ..."
Browse Our Archives
get the latest from
The Freethinker
Sign up for our newsletter
POPULAR AT PATHEOS Nonreligious
1