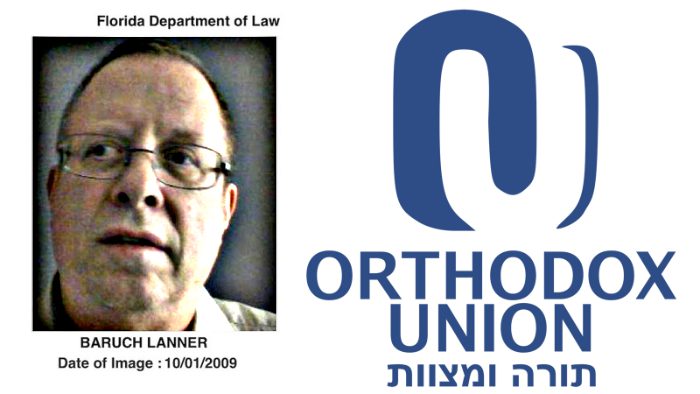 RABBI Baruch Lanner, former principal at Hillel Yeshiva High School in New Jersey who was jailed for seven years in 2005 for aggravated criminal sexual contact and endangering the welfare of a child, is now being sued by five of his female victims.

Lanner, 72, also held leadership roles in the National Conference of Synagogue Youth and its parent organisation, the Union of Orthodox Jewish Congregations of America.

He is accused of exploiting the roles “in order to defile innocent children,” according to two separate complaints, one filed on November 29 by four women and the other filed on November 30 by a fifth, both in Middlesex County Superior Court.

As far back as 1989 a rabbinic tribunal that found Lanner guilty of abuse but this information was withheld for years and he was allowed to continue having contact with children.

The women are identified only as Jane Does 1-5. Three live in Israel, one in New York and one in New Jersey, and all are adults, according to court records.

Neither the National Conference’s New York nor New Jersey offices, both named in the two complaints, immediately returned requests for comment. Lanner was unreachable for comment. Someone who answered the phone at the high school’s business office said nobody there had any comment.

The high school was only named in Jane Doe No. 5’s complaint.

The Orthodox Union did not have a formal statement. A November 30 letter circulating among its executives and board, obtained by the Asbury Park Press, indicated the Orthodox Union was aware of the new lawsuits.

The resurfacing of this story reminds us of the ongoing pain suffered by (Lanner’s) victims, and of our tremendous responsibility to be vigilant and proactive in ensuring the physical, sexual, and emotional safety of every participant in our programs.

We may not permit the failures that allowed for the abuses committed by Lanner to be repeated.

The lawsuits were filed just before the end of a two-year window for historic alleged child sex abuse victims to bring such claims in New Jersey.

Jane Doe No. 1 moved to New Jersey in 1972 at age 13 and joined a youth group through the National Conference. She claimed Lanner singled her out for attention, eventually kissing her and “groping intimate parts of her body” 20 times or more over several years. When she resisted his advances in 1974 on a trip to Israel:

Lanner became enraged as a result and punched (her) in the chest area.

A rabbi in whom she confided did not report the alleged abuse, according to the complaint.

Jane Doe No. 2 attended a synagogue outside New Jersey that was affiliated with the National Conference’s New Jersey chapter. She claimed Lanner “routinely engaged in abusive conduct” against children, and that in 1974 he tried “to sexually assault her by force” in an Asbury Park home. When she resisted and threatened to tell his wife:

Lanner became enraged, putting his hands around her neck and strangling her until she felt as if she was about to pass out.

Jane Doe No. 3 also attended an out-of-state synagogue affiliated with the National Conference’s New Jersey chapter. On a trip to Israel in 1974 Lanner kissed her and groped her breasts and made her kiss him, and repeatedly asked her “do you love me?” she claimed.

When she refused to speak to him later in the trip he punched her in the stomach, “knocking the wind out of her,” she claimed. A rabbi supervising Lanner dismissed her claims of abuse because Lanner “does so much good,” she claimed.

First asked to testify before a rabbinical court in 1989 when Lanner was accused of stabbing someone, she was later barred from testifying after telling the court’s panel about Lanner’s earlier abuse. In 2000, she claimed, a National Conference official asked her not to speak to a journalist about Lanner.

Jane Doe No. 5, the only plaintiff to name the high school, said she was a freshman there in 1994 or 1995 when she met Lanner, then the principal, who would regularly call her to his office on the pretense of disciplinary reasons, she claimed. Lanner would close the blinds, make derogatory comments, yell and spit, eventually escalating to groping her, she claimed.

When she threatened to turn Lanner in to law enforcement for abusing her and other students, he used his positions at the school and the National Conference to prevent her from joining another school or take part in youth programmes. Nevertheless, she and another victim eventually reported the abuse, leading to Lanner’s arrest and conviction.

Women first came forward with allegations against Lanner in 2000. An internal investigation by the Orthodox Union that year concluded some personnel there and at the National Conference ignored “red flags” across decades of complaints about Lanner. While the Orthodox Union did not find that there had been a coverup, it did concede that Lanner’s “inappropriate and crude behavior” should have led to his firing.

Lanner, who lived in Fair Lawn at the time, was indicted in March 2001 on two counts each of aggravated criminal sexual contact and endangering the welfare of a child. He maintained his innocence but was convicted in 2002 of both endangerment counts and one of the sexual contact counts.

Sentenced to seven years, he served only six days before being released on bail as his appeals proceeded, but was resentenced to the same seven-year term in 2005, even after one of the endangerment convictions was overturned.

All five women have demanded punitive damages and damages “for past, present and future pain and suffering and costs of medical treatment,” as well as interest and court costs.

They alleged negligence, negligent supervision, negligent hiring and retention, vicarious liability, failure to warn and failure to rescue, negligent infliction of emotional distress, violations of the state’s Law Against Discrimination and assault and battery. All five are represented by Brian D Kent of Piscataway firm Laffey, Bucci & Kent.

December 1, 2021
'Lamb of God' dead. We're fast running out of anti-vaxxers to mock.
Next Post

December 3, 2021 Pastor left puzzled as to why 'big' Democrats not dying from Covid.
Recent Comments
0 | Leave a Comment
Browse Our Archives
Related posts from The Freethinker