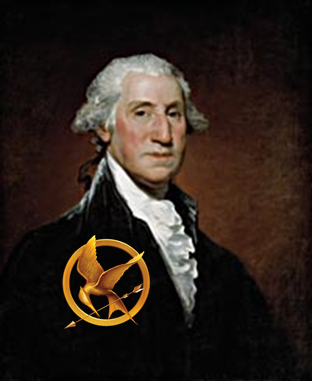 He’s a hard interview to book these days, but Patheos recently sat down with the hero of the American Revolution and the United States’ first president, George Washington. He told us about the afterlife and his obsession with young adult literature, especially the red-hot Hunger Games.  But be warned, Washington has read all the books and isn’t shy about revealing the ending. He is our nation’s Father, after all, so he has the privilege.

PATHEOS: So how are things in the afterlife?

GW: Busy. Busy. Independence Hall in Philly doesn’t haunt itself, you know. Plus, Abe and I just finished with Presidents’ Day. We like to go to car dealerships and furniture stores and impersonate presidential impersonators. Abe sold a nice leather sectional. Got the commission and everything.

PATHEOS: Do you need commissions in the afterlife?

GW: Abe owed Churchill some money after a bad round of cloud golf.

GW: Sure. Lincoln, Churchill, myself and John Belushi have a standing tee time every Thursday.

GW: You wouldn’t believe his handicap.

GW: That, and keeping up with young adult literature.

PATHEOS: Really? I wouldn’t have guessed that.

GW: Well, I used to tend toward Locke and Paine, but Winston kept going on and on about this series Harry Potter. He objected to the hairstyle worn by Rufus Scrimgeour in the movies, but he says the series was in whole a celebration of his life and life’s work.

PATHEOS: All of it?

GW: Sure, he was droning on over cigars and whiskey about how the epic narrative embodied the very spirit of Britain during the darkest days of World War II. How Harry Potter was a British everyman who found unknown courage inside himself to fight evil even in the face of almost certain defeat. Blah blah blah. He tends to go on. You should hear his thoughts on the Orcs in the Lord of the Rings adaptation.

GW: So I heard this Hunger Games was about revolution and I checked it out.

PATHEOS: I thought it was about televised death matches.

GW: It sure is, in the first book. See, in the first book, Katniss Everdeen shows a lot of spunk as she poaches food for her family and volunteers as a tribute, or death match fighter, in her sister’s place. I like that lass. Reminds me of a few Colonial girls I knew.

But in the second book, she becomes the symbol of revolution.

PATHEOS: And revolution is your gig.

GW: Absolutely. Revolution is my gig. It’s what I know. I mean, in The Hunger Games, a fat and lazy Capitol sucks all the resources from its districts, leaving them starving. Can I get a “No taxation without representation,” What? What?

PATHEOS: 13 Districts. One Capitol. Total injustice. That does sound familiar.

GW: Taking your children and making them fight to the death on TV sounds a bit worse than a stiff tax on tea, amirite? And the styles! I had to laugh reading about the dyed skin and bejeweled faces. Man, the powdered wig, tights, and lace set in London would have loved that in my day.

GW: Yes, the Capitol is totally foppish. Very much like His Majesty King George’s court.

PATHEOS: So is Katniss a younger female version of George Washington?

GW: Well, that’s what I thought, you know? Winston is always going on about Harry Potter. ‘What would Harry do?’ he says. He’s become downright insufferable. So I loved it when Katniss becomes the reluctant symbol of revolution. Then, in the third book, she escapes to the 13th district. The one they thought was destroyed? It’s really the headquarters of the scrappy rebels.

PATHEOS: The Continental Army, if you will.

GW: Yes. Katniss becomes the Mockingjay, the embodiment of the revolutionary spirit. But it all falls apart.

GW: Yes. My hopes were dashed. See, Katniss never really takes up revolution inside, you know, in her heart. She suspects the new District 13 president is just like the old Capitol president. She never believes in the cause of freedom. In the book, she’s right. She’s using Katniss and she just wants power.

GW: Yes. It’s as if freedom doesn’t exist or is just an illusion. Katniss regrets fighting.

PATHEOS: Regrets it? Did you ever regret it?

GW: I always regretted the suffering, the lives lost on both sides. But we were fighting for something, something real, you know? Those men who stayed with me at Valley Forge with no shoes and no blankets, they didn’t think I was just fighting for power. They knew that freedom was better than oppression. We still get together once a month and relive old times, by the by. Those fellows can really put away the mead.

PATHEOS: Doesn’t Harry Potter, to bring up a sore subject, regret it?

GW: It’s different. Harry Potter and Frodo Baggins, too, end up tired and weary – wounded even – but they never think their struggle wasn’t worth it. There’s something ineffable about their fight against evil that makes the wounds bearable.

PATHEOS: Inalienable rights? Life, liberty, the pursuit of happiness and all that?

GW: Exactly. And I’ve seen that determination in the 236 years since our revolution, you know? Watching Martin Luther King Jr. walk for dignity. Watching the Berlin Wall fall symbolizing the end of the tyranny of the Soviet Union. When I lose heart, even now, I look down on Syria where people are dying just for the hope of being free.

PATHEOS: So The Hunger Games didn’t do it for you?

GW: Don’t get me wrong, it’s a great story, but the end was a big disappointment. I guess I’ll just have to listen to Winston crow a bit longer until someone writes something I can get behind. 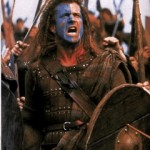 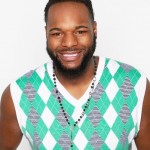 March 14, 2012 American Idol Contestant Jermaine Jones Disqualified From Competition
Recent Comments
2 Comments | Leave a Comment
Browse Our Archives
get the latest from
Family
Sign up for our newsletter
POPULAR AT PATHEOS Family
1

6 Things Good Fathers Do: Here's Number 2...
2) Good Fathers Are Physically Present... Most fathers that I speak with...
view all Family blogs
What Are Your Thoughts?leave a comment