Barbara Nicolosi Accuses Me of Selling My Soul to ‘Noah’ Marketers – For a Stale Bagel April 1, 2014 Rebecca Cusey 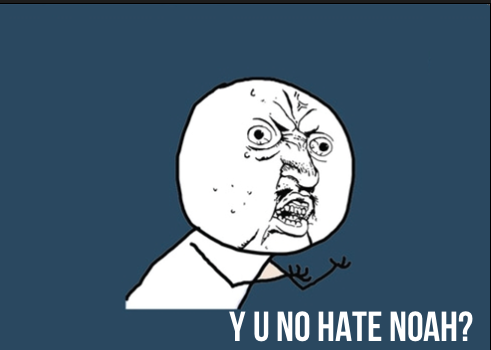 Apparently my colleague Barbara Nicolosi is going to blow the cover off the scandalous secret of Christian film marketing.

I want to be very clear that I have a lot of respect for Barbara. She was instrumental in helping me start thinking about movies specifically and culture in general. She taught at the Act One writing program at the time, a screenwriting school that takes the business of Hollywood seriously and trains Christians to hone their craft so they are able to professionally and artistically speak into the moviemaking and TV business.

Barbara was never soft with her students. You have to make a career of Hollywood, she taught, not a hobby. You have to respect the craft. You have to actually work hard, very hard, and maybe in decades you’ll be at a point where you can make a difference.

It was tough love, tough love that the Christian culture needed and she helped shape Christian thinking at that time and I’m grateful for her voice back a decade ago.

That’s why it bothers me so much, though, that in the case of Noah, Barbara will not concede that other Christians may have a valid different opinion on the movie (here’s my positive review). She has said that those of us who like it don’t really like it, but are lying and have received some shady, yet undefined, payout from the studio.

Because we have the temerity to disagree with her.

This is insulting at best, slanderous at worst.

I certainly don’t get paid much for being a movie critic. If I were selling my soul, I’d expect it to pay better.

Barbara has taken what was a friendly debate among various Christian critics and turned it into something ugly and personal. Us versus them. The righteous versus the evildoers. The godly versus the diabolical. Over a movie. Over, let’s repeat again, a movie. Not human trafficking or homelessness or war theory or abortion. A movie. 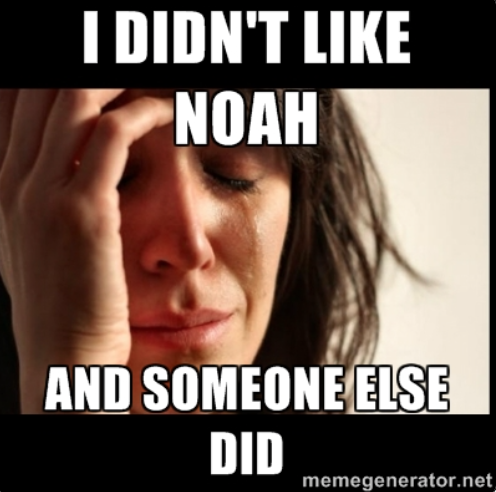 This was not necessary. And it’s not right.

Yes, marketing firms focus on the Christian market. This is not news either. We can’t have it both ways, saying that Hollywood ignores people of faith on one hand and demanding products (i.e. movies) that we want to see, and then turn around and complain that we’re treated as a market.

So you can peek behind the curtain here, let me tell you how I came to review Noah early and interview the directors.

By the way, separately from my screening and interview, the advertising department at Patheos made a deal to advertise the film on our site. Many other sites advertised the film as well. One had nothing to do with the other. This is an age-old dilemma in news, from the early days of newspapers. Like all reputable sites, we have a firm line between editorial and advertising, which is why what Barbara says about the Entertainment Channel at Patheos, which I run, being undisclosed paid advertising is patently untrue.

The stories I ran were selected for their news value and nothing else. With all the worldwide press this film has generated, I hardly have to argue it was a news-worthy story.

Peter Chattaway here at Patheos was covering Noah and other Bible stories in more depth than anyone else long before he was offered an interview. He continues to do fine work. And Steven Greydanus’ work on Noah has been extremely valuable and insightful as well.

By the way, Barbara will receive a decent sized check for her post, paid for in part by the advertising she so denounces. 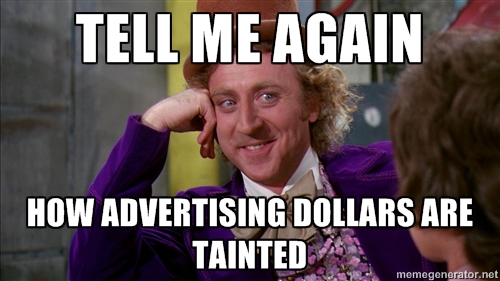 Anyway, Paramount and Grace Hill Media, who have always treated me well and with integrity, offered me an advance screening and an exclusive interview on a movie with a lot of buzz, especially to my faith-based readership. I jumped at it.

I know “journalism” is a lofty word to throw around about movie criticism, but ultimately that’s what I aspire to. Like Jake Tapper scoring an interview with the President or Barbara Walters interviewing Bono, we all scramble for content that will bring eyeballs to our writing and serve the public. We want the big story, the scoop.

I do many interviews a year, some of them pitched by Grace Hill Media, most via other contacts. I turn down quite a few pitches from GHM and others as well. Some interviewees are big names, others you wouldn’t recognize but have big talent. Here’s the interview I did recently with Jason Bateman about the extremely R-rated Bad Words, an interview I also very much enjoyed, and which, frankly, should be WAY more controversial than my work on Noah.

Of course I jumped at Aronofsky. I would be crazy to turn down an advance screening and interview with the hottest movie of the year so far and a story that was making waves not only in religious circles, but worldwide secular circles.  It has nothing to do with the pride of meeting famous people or stoking my ego, except in the sense I would like to be an excellent journalist. It has everything to do with scooping the story and serving my readers. This is what journalists do.

I agreed to an embargo until a certain date – standard operating procedure in many beats of journalism – and nothing else. It was clear that the studio hoped I’d like the film. It was clear that I might not and that was the risk they were taking. We discussed that ahead of time.

Paramount tried to set up the screening and interview here where I live in DC. Darren Aronofsky was still editing some aspects of the film and could not take time for an entire day trip to DC. So I accepted a flight up to New York paid for by the studio. Patheos does not have a budget for travel, at least not yet, something not unusual in the tightened financial arena of current media.

The plane was just a rickety puddle jumper. More dubious than luxurious. I flew there and back the same day. I watched the film in a screening room and missed lunch time doing it. Someone brought me tea in a styrofoam cup (which I spilled all over the floor and myself like a dork but at least it helped me identify with the characters in the flood scene).

I liked the film very much, immediately. Paramount reps rushed me to make my window with Darren Aronofsky and Ari Handel. I talked with them for 25 minutes and found them both fascinating, intelligent, respectful, and well-thought. This is not always the case with Hollywood types, but it was here. (Read my entire interview here.)

I confess that in a moment of weakness brought on by low blood sugar, I did accept an abandoned stale bagel that was laying around the Paramount break room. 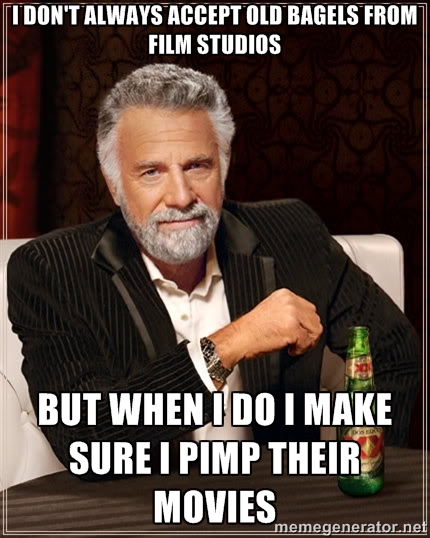 Ah the glamour of show business!

I then went home, paying for my own crappy overpriced airport dinner, which I scarfed down like an orphan in a Charles Dickens novel, and wrote an honest review and interview feature. Oh, I bought myself a nine-dollar beer too. I might buy myself another one after finishing this post.

All in all, I would rather have stayed in DC that day if it weren’t for the story I was chasing. I went through a long day of travel for a story that I thought, and still think, was valuable to my readers. The travel about as much fun as a root canal. The story itself was great fun. I do not appreciate Barbara or anyone implying I have done anything scandalous, immoral, or unprofessional here.

Barbara’s reasoning goes: These critics disagree with me, therefore they are lying. If they are lying, they must have a reason to lie. If they have a reason, they must be bought. It’s the worst kind of ad hominem attack and betrays a shocking arrogance about the presumed correctness of her own point of view.

She’s so right that anyone who disagrees with her is not only wrong, but evil.

My salvation hardly rests on whether I agree with Barbara on how many stars a movie should get.

I mean, I agree with Rotten Tomatoes’s Tomatometer 76% of the time, but I don’t expect that to get me into heaven.

But I would much rather engage Barbara, learn from her, and enjoy her usually insightful analysis than fight her. I hope she’ll be willing. 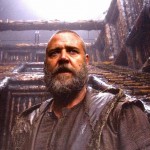 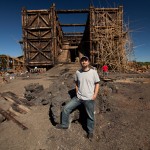