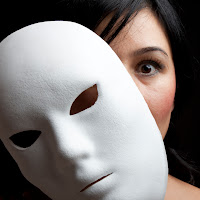 The polls are closed and it’s time for the Big Reveal for this Ideological Turing Test experiment. Below are the bios of all participants, along with links to the answers they wrote. All the way at the bottom is a table to let you look up shamming/sincere by the numbers. The rankings of participants and accompanying charts for the Atheist Round will go up this afternoon. A similar post for the Christian round will follow tomorrow morning.

I am Catholic and a PhD candidate in ethics at the Graduate Theological Union in Berkeley, studying natural law and the intersection of science and religion. I am an adult convert from atheism. I blog at TheMoralMindfield. Come follow us on Twitter!

Chris – Author of A3 and C13
I’m a cradle Catholic, and my questioning has always led me back to home base (though with variance in length of wanderings).

Lorilyn – Author if A10 and C11
26 year old female, raised in a Christian household, belong to a non-denominational church in a large city that focuses on church planting. Besides that, I’m hopelessly addicted to home remodeling and politics. Come visit me at A Crummy Marriage Blog or Coming Down to Earth.

Jeannine – Author of A14 and C7
I am a practicing Roman Catholic, and like New York Times journalist Nicholas Kristof, I believe that the Catholic Church is really two churches: that of the Vatican hierarchy and that of individual believers at the grass roots. I prefer to align myself with the second group. I blog at http://anotherliberalcatholic.wordpress.com/.

Kat – Author of A1 and C3
I am a young (<30), female orthodox Latin Catholic.  I was raised in a moderate Episcopalian home and attended a liberal Episcopal parish as a child, had primarily Chinese Baptist friends throughout K-12, and then attended a Catholic university (majoring in philosophy and theology), where I was confirmed into the Church at age 20.

I am a convert to (Eastern) Orthodox Christianity. Raised Mormon, I left that church at nineteen, visited various churches for several years, was baptized Orthodox in 2006. C.S. Lewis is my favorite writer. I am an economist, and the author of Principles of a Free Society. Blog:freethinker.typepad.com.

Tristyn – Author of A15 and C12
Baptized Lutheran, grew up atheist, converting to Eastern Orthodoxy. Graham Greene meets Dostoevsky on my good days, Hemingway meets Hunter S. Thompson and August Strindberg on the bad (to be incredibly self-aggrandizing). You can find my tobacco and vodka fueled ramblings at Eschatological Psychosis. Put down your cross, child, we can use the wood.

I’m the author of the blog Daylight Atheism. I’m also an atheist and secular humanist who believes that reason is the only way to understand the world, and that our moral obligations toward each other are rooted in compassion and empathy rather than obedience to dogma.

Bo – Author of A8 and C15
I’m 25 and have been atheist since childhood. I’m married; my wife is an atheist-leaning agnostic. Most of our extended family is Catholic, and most of my friends are some type of Christian.I don’t write much, but sometimes I post things to http://sites.google.com/site/bbayles/

Charles – Author of A11 and C14
Raised Roman Catholic from 6 years old till 12 years old. Since then I take a rational materialistic view and as such see no evidence for ‘super-natural’ claims including gods, etc. I am endlessly fascinated by religious practices. For the past year I have attended Roman Catholic Mass regularly

Leah – Author of A12 and C5
It is I, the author of this blog.  I’m born and bred atheist, dating the nice Catholic boy who wrote answers A3 and C13.  When I’m not blogging about religion, I write for The Huffington Post and, til recently, The Yale Daily News.

Michael – Author of A5 and C4
The easy label is that I am an atheist. I grew up in a family that had not participated in organized religion for two generations. I am an Objectivist. I believe that living things are more than the sum of their parts. I blog at necessaryfacts.blogspot.com.

Peter – Author of A9 and C1
I was raised as a reform Jew, and ceased to practice any religion shortly after my bar mitzvah.  Religion has never played a large part in my life, and I have never found it terribly compelling.

Alex (Atheist-Christian) – Author of A7 and C2
I don’t believe that there’s a personal, interventionist type God. I do, however, find that the philosophy of Jesus Christ is radical, difficult to grapple with, and true. There is wisdom in the Bible that should not be ignored. Thus, I consider myself an atheist. And also a Christian. 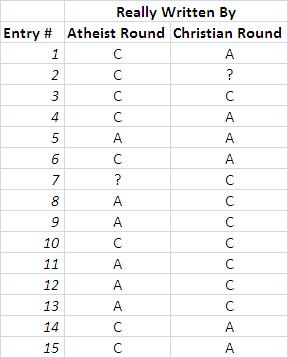 *The ? denotes Alex. who considers himself an atheist and a Christian.

July 20, 2011 Who Won the Atheist Round?
Recent Comments
134 Comments | Leave a Comment
"Do You Know what isn't Fair? Calling Atheism a Religion. Or saying Dawkins is a ..."
skwills Who Gets to Give the Courtier’s ..."
"Oh! And you can get there via Naval Gazing.(probably not by Navel Gazing...)"
TheSparksFlyUpward Too Sucky To Be True
"Hello, Deiseach!1. This is not an ad. (It always reassures me when someone says that!! ..."
TheSparksFlyUpward Too Sucky To Be True
""Do you honestly think that a child raised by a woman has no exposure to ..."
Zorin 2012 Queer Blogathon [Index Post]
Browse Our Archives
get the latest from
Catholic
Sign up for our newsletter
POPULAR AT PATHEOS Catholic
1