Tonight I’m seeing Les Miserables for the third time (there have been various outings as people have straggled back into DC after the holidays) and, a day or so after my second viewing, I ran across David Denby’s pan of the movie for The New Yorker.  Some of the criticisms are fair (the camerawork draws attention to itself in a bad way, Jackman’s voice isn’t as well suited to Valjean as it was to Curly, etc), but there was one plot-related criticism that I disagreed with big time.  Denby writes:

Is it sacrilege to point out that the Victor Hugo novel, stripped of its social detail and reduced to its melodramatic elements, no longer makes much sense? That the story doesn’t connect to our world (which may well be the reason for the show’s popularity)? Jean Valjean becomes a convict slave for nineteen years after stealing some bread for his sister’s child. He has done nothing wrong, yet he spends the rest of his life redeeming himself by committing one noble act after another, while Javert pursues him all over France…

[T]he implications of Jean Valjean’s complete innocence are dismaying. Suppose he had actually committed some sort of crime as a young man. Are we to infer that he wouldn’t be worth our tears if—like the rest of us—he were even slightly culpable? Saints do not make interesting heroes.

I think Denby is thinking of a Saint as a character class.  The distinction is baked into the character at the beginning the story, and the constraints of that choice limit and define the roles the character can play in the story.  And Denby thinks Fantine and Valjean are boring ol’ paladins.  Totally committed to the Good, incapable of making a selfish choice, they’re what Javert only thinks he is.  And no one really wants a paladin for a protagonist; since the fun of stories is getting to watch characters choose, maybe err, and rechoose.   Paladins are more like wind-up creatures than people; they just keep tick-stepping in the right direction.

But if that’s how Denby feels, I think he must be reading a different book and watching a different movie than I am.  In the part of the book that corresponds to “Who Am I?” Valjean does struggle to make the correct choice.  When Valjean has the opportunity, for the first time, to live without fear of discovery, provided he lets another man go to jail in his place, Hugo writes:

Undoubtedly it would have been splendid if, after the holy words of the bishop, after so many years of repentence and self-denial, in the midst of a penitance so admirably begun, even in the presence of so terrible a conflict, he had not faltered an instant… but it was not the case…

For the first time in eight years, the unhappy man had just tasted the bitter flavor of a wicked thought and wicked action.

In that line, we can see the fruit of making the right choice day by day.  It’s not winning the right to a love interest and getting a big, dramatic kiss at the climax of the story.  It’s the development of phronesis or practical wisdom.  By choosing the right thing day after day, Valjean is strengthening his conscience so that the wrong choice feels awkward and alien to him.

And even that isn’t enough to see him through this trial.  Valjean doesn’t decide to give himself up until he travels to the trial and is in the presence both of the suffering man he has the power to spare (the prisoner in the dock) and the suffering God who spared him (a crucifix on the wall of the courtroom).  He needed these visceral reminders to help him stand by what he already believed (before he arrived, he had already come to understand, “And, whatever he did, he always fell back onto this paradox at the core of his thought.  To remain in paradise and become a demon!  To re-enter hell and become an angel!”).

Valjean still has plenty of room to grow.  He is still struggling to make his conceptual understanding of God’s mercy and justice a moral reflex.  But not all progress is dramatic looking.  In The Presence of God by Fr. Anselm Moynihan, O.P., he describes how the growth of the soul can become more subtle as it becomes more intense:

When a sculptor is making a statue, he has first to hack and hew the marble somewhat in order to get it into a general rough shape. But then, when the rough outlines are complete, he can use smaller tools and more delicate touches. Finally he will finish off the work with touches of an exquisite fineness. That is the way God deals with us. At first he shows himself only in the big events of our life; only the big blows seem to come directly from his hand. Then, when these have knocked up into some sort of shape–which they will do in the measure of our submission to his will–he seems to touch the soul more frequently and more delicately. Finally, if we are true to these touches, God’s hand will appear in everything that happens to us; nothing, even the most trivial, but will have an essential part in the fashioning of our soul.

When Valjean is blessed by the bishop, he has been living entirely outside of human society.  To become M. le Maire, a man of public virtue, he has to put aside his despair and doubt that other people could look on him with love and respect, that he could be an instrument of grace in the lives of others.  But, even as he saves Fantine, he is not moved by personal love for her, simply a desire for redemption and goodness.

When he reveals himself, he is once again cast into infamy, but his time as mayor, his rescue of Fantine, and his growth in faith sustains him during his hermetical existence in hiding.  He does not doubt, as he did in his first exile from the world, that he is good and worth saving.  But his willingness to give up the world means that he won’t face the “Who am I” temptation again.  He gained a civil relationship with his fellow people and learned to put it aside in the service of something higher.

When he raises Cosette, he accepts new responsibilities which bring new virtues and temptations.  Hugo emphasizes in the novel that Valjean has not experienced love (caritas) since his release, though he has served other people in fellowship (storge and philia).  But Cosette’s innocence and dependence awakens awe in him.  This is love through pedagogy (my favorite kind) where the responsibility of forming her character overwhelms Valjean with joy and fear.  Raising a child is an act of hope.

When Cosette is grown, Valjean is called to make Hannah’s choice, and relinquish his daughter instead of reserving her for himself and allowing his love for her to eclipse all other responsibilities.  He struggles with this choice, just as he did in “Who am I” and once again needs to see the man he might betray by his selfishness (Marius) to make the virtue stick.

Valjean’s dilemmas have grown less dramatic, but the stakes are no lower.  It’s a poor sort of virtue that can triumph only when the temptation feels titanic.  Valjean’s nobility inspires us because it is ultimately expressed in the quotidian and the domestic.  And each daily, small Amen to virtue is worthy of song as the more public turning points that set him on his journey further up and further in. 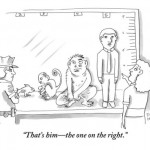 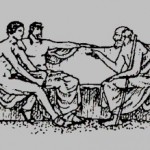 January 10, 2013 Straight from the Humanist's Mouth
Recent Comments
110 Comments | Leave a Comment
"Do You Know what isn't Fair? Calling Atheism a Religion. Or saying Dawkins is a ..."
skwills Who Gets to Give the Courtier’s ..."
"Oh! And you can get there via Naval Gazing.(probably not by Navel Gazing...)"
TheSparksFlyUpward Too Sucky To Be True
"Hello, Deiseach!1. This is not an ad. (It always reassures me when someone says that!! ..."
TheSparksFlyUpward Too Sucky To Be True
""Do you honestly think that a child raised by a woman has no exposure to ..."
Zorin 2012 Queer Blogathon [Index Post]
Browse Our Archives
get the latest from
Catholic
Sign up for our newsletter
POPULAR AT PATHEOS Catholic
1