There’s no way this feature on a live-action Oregon Trail game wasn’t taking top billing on my Quick Takes this week.  Trust me, you want to read the whole thing:

And then there was the problem of meat. On the trail, as in the game, if you killed a bison, you could only carry 200 pounds of meat with you. In the live-action game, participants face the task of pushing 200 pounds of meat up a hill—in this case, a 200 pound man in a wagon regaling the crowd with meat facts. In our case, it was a local butcher dressed like a cow, who later tested us on the names of cuts of a side of beef.

That article was a delightful surprise, and, if I listened to my old coworker, Julia Galef, I could get a lot more out of other, slightly less absurd surprises, by recording and learning from them.  Julia spoke to Fast Company about her habit of surprise journaling, and the way it helps her hone her reasoning:

[Julia] Galef set out on a personal quest to identify her wrong assumptions. The outcome: the Surprise Journal. She keeps this journal with her at all times, writing down when something surprises her and why. For example, she noticed she was surprised that both older and younger people were attending her workshops, because she assumed people would self-segregate by age. She was surprised that her students would mention a concept from one of her colleague’s classes, because she didn’t expect that idea to be very memorable. “I started thinking about surprise as a cue that my expectations were wrong,” she says.

Also, just as a heads up for any European readers, CFAR (of which Julia is president) is crossing the Atlantic this fall, and running two workshops in England in November.

It’s a pleasure to marvel in the everyday, but sometimes it takes a change in perspective to be caught by surprise by the “ordinary” world around us.  That’s why I quite appreciate this cartoon: 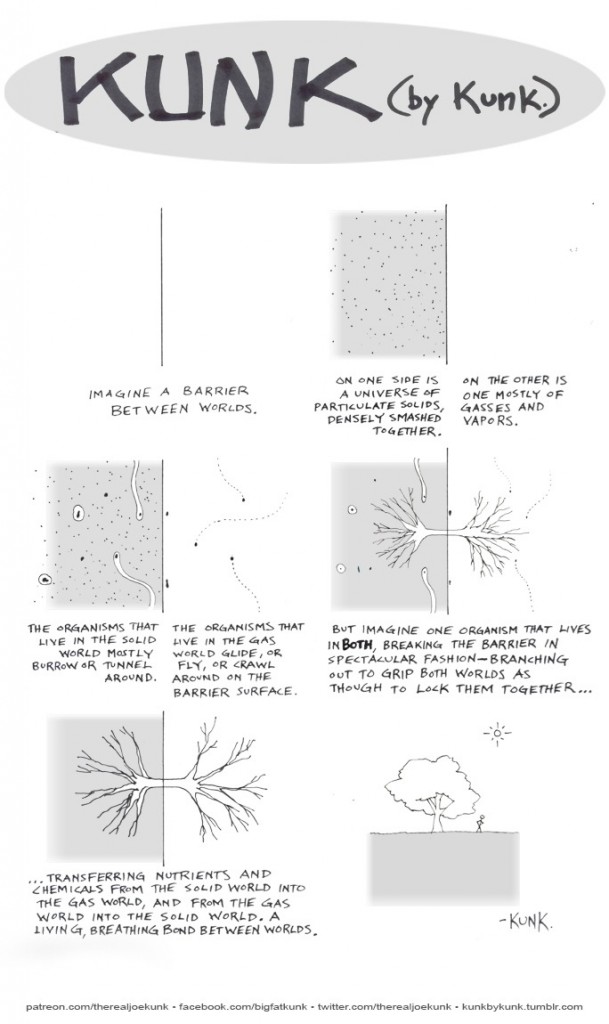 There’s plenty in the world to serve as means to create our own fun.  And who knows that better than the researchers who engaged in a years-long competition to see who could sneak more Bob Dylan lyrics into their published papers.  (The commenters at the link appear to have taken up the same game).

The competition apparently began when two scientists published a paper about flatulence titled “Nitric Oxide and inflammation: The answer is blowing in the wind.”

A few years later, a very well-read librarian spotted a second Dylan-themed paper and introduced the two teams. The competition eventually expanded to include five scientists.

On a similar note, a friend recently told me that he had a classmate who gave every single paper he wrote in college the same subtitle.  They were all called some variant on:

Creativity in titles is fine.  It’s creativity in analysis that causes problems.  Andrew Gelman has a link to a great parody of spurious statistics results, called “An Exact Fishy Test.”  (This is why the name is funny).

No matter how unrelated the numbers you put in, it always finds some “significant” relation between them, by simply testing hypothesis after hypothesis until one comes up true.

Bad statistical slight of hand is (sadly) common, but talking about all of mathematics in terms of magic is not.  Too bad.  This narration of proof by induction by Sanchit Agrawal is romantic, delightful, and accurate.

Every mathematical induction consists of three parts or acts.

The first part is called “The Base”. The mathemagician shows you something ordinary: a claim, a theorem or a lemma. He asks you to see if it is indeed real, unaltered, true for k = 1.

The second act is called “The Hypothesis”. The mathemagician takes the ordinary claim and assumes it to hold for k = n.

Now you’re looking for the trick … but you won’t find it, because of course you’re not really looking. You don’t really want to know. You want to be fooled. But you wouldn’t clap yet. Because assuming something for k = n isn’t enough. You have to prove it for k = n + 1.
That’s why every induction proof has a third act, the hardest part, the part we call “The Inductive Step”.

Speaking of moving forward by small steps, here’s my progress photo for Halloween this week, by the way: 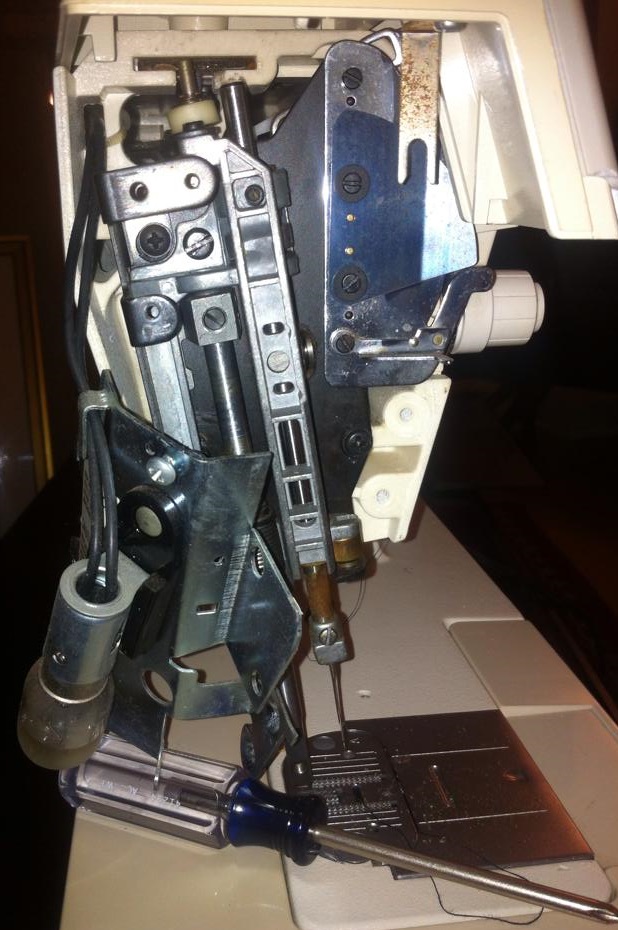 What’s that, you say? You didn’t realize I was going in such a dieselpunk direction?  Or that my costume involved so many moving… hey, wait a second… jammed parts?

Sadly, that is the inside of my sewing machine, the undiscovered country into whose bourn the presser foot will not retract.  I’ve futzed around with screwdrivers and schmatics, and it looks like it will be more expensive to repair than to replace.  So, in the meantime, onto the (very mildly spoilery) accessories:

And, to cheer me us up with stories about completed costumes, here’s Fast Company on the stories behind five famous movie costumes:

Despite being made by Adrian, one of the most legendary costume designers of the 20th century, Dorothy’s pinafore is shoddily crafted.

DL: I cried, because the pinafore is really badly made. The inside seams are totally uneven. You can see that the sewing machine skips. And it was a revelation about costume design. Consider the history: it was 1939–the greatest year of Hollywood movies. The designer, Adrian, was the uncontested greatest designer in Hollywood. Adrian was the king. He ran the MGM workroom like Dior. Every single suit was French-seamed, made as beautifully as any French couture. They could make anything–for Norma Shearer, Paulette Goddard, Joan Crawford, Greta Garbo. So why was Dorothy’s pinafore so poorly made?

This next part is fictionalized. I’m holding the pinafore in my hands, and this is what went through my mind: Adrian, the greatest costume designer maybe of all time, said, “I need to channel Aunty Em.” He asks someone in his department to go shopping, saying, “Please go find the cheapest dustbowl blue gingham at 5 cents a yard. Please go find something a Kansas farmer’s wife would buy to make a pinafore for her niece.” They come back with the three yards of gingham. He says, “Please find a washboard and wash this 100 times on the washboard, then find wooden clothespins and hang it outside your house in the San Fernando Valley so it smells like the outside.” Then he’d look at the women in his as-good-as-couture workroom, and ask, “Does anyone still have a treadle machine?” And a woman raises her hand, and he says, “Okay. I want you to take this fabric and sew this like you’re Aunty Em, and I want you to break a few needles while you are stitching it.” And she brings it back to him and he may say, “This is too well made.”

And that’s what this dress is like. This pinafore is really like a piece of the true cross for the costume designers, and I hope that’s not heresy. It feels like your favorite pillowcase. It’s so soft. And it’s made so badly, and with so much love. It expresses everything about farm culture in the Dust Bowl. It’s not a costume, it’s really Dorothy Gale’s dress.

Unfortunately for me, my character’s clothes would have been made by a professional.  But I will always have fond memories of working on the costume crew for Bunkerville and being involved in conversations like this:

Me: Do I need to change the bobbin so the hemming thread matches each cultist’s robes?

Costumer: It’s post-apocalyptic.  Maybe they only had one kind of thread left! 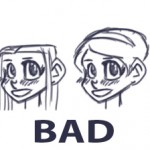 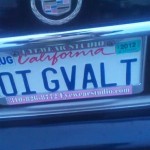 October 6, 2014 Luxuriating in Kvetching [Pope Francis Bookclub]
Recent Comments
0 | Leave a Comment
"Oh! And you can get there via Naval Gazing.(probably not by Navel Gazing...)"
TheSparksFlyUpward Too Sucky To Be True
"Hello, Deiseach!1. This is not an ad. (It always reassures me when someone says that!! ..."
TheSparksFlyUpward Too Sucky To Be True
""Do you honestly think that a child raised by a woman has no exposure to ..."
Zorin 2012 Queer Blogathon [Index Post]
"I'd love to see a video of how it works. keranique shampoo reviews"
Marlene Garza Welcome Camels with Hammers to Patheos!
Browse Our Archives
Follow Us!