In this week’s chapter, Pope Francis discusses Job and says that, once Job entered into the depth of his suffering, Job was uniquely ready to address God, if only because his need went beyond what the wise men of his community could answer.  Pope Francis goes on to develop a theme of praying out of woundedness (that, admittedly, I didn’t quite feel like I got).

The word of God has creative force, and once God speaks a word to us, it can only become Word made flesh.  But to receive the gift of the Word made flesh, we must hear it from our fleshly neediness, from our wounds, from our own debility.  Otherwise, the flesh would wax proud.  This is why the Lord comes for the sake of the sickly and not the healthy.

The part of this that is easiest for me to understand is the way that pride and strength can choke off mercy.  Mercy is a gift, and a sorely needed one.  When it arrives, it comes with a sense of spaciousness that’s almost dizzying.  But the temptation is to not acknowledge that you were in dire straits to begin with.

“Thanks for the help, I was about to get to that” is a very different sentiment than “Thank you, I could not have done that for myself.”

The inbreaking of mercy to heal something festering reminds me of this quotation from G.K. Chesterton’s Orthodoxy.

And in dealing with those whose morbidity has a touch of mania, modern science cares far less for pure logic than a dancing Dervish. In these cases it is not enough that the unhappy man should desire truth; he must desire health. Nothing can save him but a blind hunger for normality, like that of a beast. A man cannot think himself out of mental evil; for it is actually the organ of thought that has become diseased, ungovernable, and, as it were, independent. He can only be saved by will or faith. The moment his mere reason moves, it moves in the old circular rut; he will go round and round his logical circle, just as a man in a third-class carriage on the Inner Circle will go round and round the Inner Circle unless he performs the voluntary, vigorous, and mystical act of getting out at Gower Street. … Curing a madman is not arguing with a philosopher; it is casting out a devil.

Every attempt to shrink aid down to something smaller than mercy, so that it’s just kind or thoughtful, to remake it the kind of thing that can be accepted pleasantly and easily, because you could have done without it, but feel lucky to get to take the easier path, is a denial of its nature.  It makes it harder to ask for mercy rather than just a bit of help and to make the kind of leap that Chesterton prescribes for the morbid mind.

Richard Beck, author of The Slavery of Death, wrote recently that he sees this shying away from the full acknowledgement of mercy at many of the churches he visits.  This kind of narrowing winds up kneecapping the triumphal message of the Christus Victor understanding of the Resurrection.  Beck writes:

For Christus Victor theology to make any sense you have to have a robust theology of those dark enslaving powers, a robust theology regarding our spiritual bondage to the powers of death, Satan and sin. And yet, because of their pervasive struggles with doubt and disenchantment, along with their post-evangelical reluctance to talk about our enslavement to sin, progressive Christians lack an important aspect of Christus Victor atonement: a vision of enslavement to dark spiritual powers.Basically, what are you being rescued from if you aren’t enslaved to anything in the first place?

The goal is to be able to recognize our own propensity to cruelty and fear, before we hit bottom, if possible, so we can properly recognize the opportunity for caritas as liberation, not just something we were surely going to pick up any day now.  Along with that gym membership.

I’m on Day 2 of a Novena to Mary, Undoer of Knots.  Please feel free to join me! 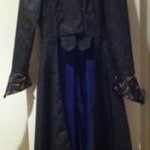 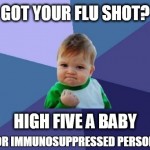 October 15, 2014 Update on Vaccination/Fundraising Drive!
Recent Comments
0 | Leave a Comment
Browse Our Archives
get the latest from
Catholic
Sign up for our newsletter
POPULAR AT PATHEOS Catholic
1