Here’s a heads up — the women who write at A Queer Calling are running a GoFundMe to raise money to train a service dog for Sarah (who has fast-progressing Meniere’s Disease).  I think some of you read their writings on hospitality, affection, vocation etc, so you may want to help them out.

I gave to their fundraiser and then matched the donation with one to Against Malaria — GiveWell’s top ranked charity, so that the need of people I already know and care for can be a spur to give to people I don’t (and won’t) know personally.

Talking Points Memo has a profile of a different group of people that, like Lindsey and Sarah, have put together an unconventional kind of household.

Mainly, it’s the shoes. There are three pieces of furniture intended to contain all these shoes, and then there are bins holding the run-off—forty pairs is probably a conservative estimate. And at the center of this shoe-storing area, there is a repurposed vanity containing all the other “Honey, I’m Home” objects, a dense tangle of keys and sunglasses and pieces of mail, bike locks and a roll of electrical tape.

I’m here, at the home of seven adults not related by blood and two children, to find out why one would choose to live somewhere that requires such an extreme shoe-storage situation. What does it look like, in an age of post-recession scarcity, for a group of people to successfully weather their late twenties and early thirties together, to embark on the great child-rearing mission in a shared home?

At The Hedgehog Review, Wendy Baucom profiles a French plaza that has turned itself into a public space that welcomes families and lets them mingle with their neighbors:

People of all ages and classes congregate in the square. I believe it’s critical that there is no cost to play. Some users could afford a day trip to a museum, while others have very few toys in their own homes. Moreover, the nature of play makes it easy for cultures and nationalities to mingle. Chinese and Senegalese Parisians may shop in different grocery stores, but here they play the same games, regardless of their language proficiency. As my non-French-speaking son can attest, language is seldom a barrier when there’s a great game in progress. Other, perhaps more insurmountable barriers, like politics or religion, may be set aside by adults in need of a chess partner.

I don’t want to overstate what happens at the games kiosk. Without it, the square will still be criss-crossed by thousands daily, a few of whom will sit at the park benches or order at the cafe. But the presence of toys and games changes the character of the space. Suddenly it welcomes families, and friends of families; it speaks to our love of play and recreation. We’re not just using this space, we’re enjoying it. There is a huge benefit to introducing a palpable measure of regular happiness to the environment we already inhabit. Such feelings are a key element in neighborhood pride.

Introductions and new connections are facilitated by public spaces, though there’s still always room for professional pair-ers.  Speaking of which, the NYT recently had a very amusing correction at the bottom of an article titled “For Nice Jewish Guys, Swipe Right”

An earlier version of this article and its accompanying headline incorrectly compared JSwipe users to yentas. Yentas are busybodies, not matchmakers.

Yenta may not technically mean matchmaker, but surely any good matchmaker is a yenta.  Look no further than Chuck Schumer for an example, who the NYT called “The Yenta of the Senate” (and the article in which that appeared “Senator, Senator, Make Me a Match” is just as fun to read as you’d expect).

“What’s the holdup?” the senator asks couples who are dillydallying on an engagement. “Did you get a ring yet?” Other could-be-marrieds receive a simple instruction: “Get moving!”

“He would just keep saying, ‘Let’s go already,’ ” recalled Sean Sweeney, a top Democratic strategist who began dating the woman who would become his wife when they were on Mr. Schumer’s staff in 1999. When he proposed, the senator reacted “like a sportscaster,” Mr. Sweeney said. “ ‘Goooooal!’ ”

The encouragement rarely stops at the altar. Mr. Schumer is described by aides as a fabulous wedding guest, quick to request a Jefferson Starship song from the D.J. and eager to dance with the bride. And his focus, like many a politician’s, never strays far from his legacy: first comes Schumer Marriage, then come Schumer Babies.

“Have kids; have a lot of kids,” Mr. Schumer, who has two daughters, is known to intone. “Start early and keep having them.”

I strongly recommend reading the piece aloud, because it’s a pleasure (and taking a job in Schumer’s office if you’re having trouble finding a fiancé(e)).

Also on the subject of pairing, Emmy Noether’s birthday was this week, and this article on Freelance Astrophysicist was my favorite thing I read on her and her insights into symmetry/physics.  I’m pulling only one paragraph below, but you may need to read the (short, layperson-friendly, enthused) essay to make it make sense:

March is a little early for even me to start planning Halloween costumes (I mean, I’ve ordered some sewing patterns I might use — one for an airship privateer), but I really enjoyed this video on using chemical tricks for practical knife effects (probably too messy for costumes, though).

Warning: it’s a very good effect, so if it grosses you out to see knife wounds, these fake wounds will also gross you out.

Finally, I know some of you are already fans of LessWrong and the Sequences by Eliezer Yudkowsky (hosted on that site), so, for you folks (and for anyone interested in reading essays on how to recognize and combat cognitive biases), you may want to order the cleaned up, ebook version of those essays, Rationality: From AI to Zombies.

I really liked the original essays for being vivid and actionable (and for inventing useful, memorable shorthand) and I know I’ve linked to them a fair amount.  I’m looking forward to taking another look at them, and having them in a reasonable format.

If you’re looking for a community to read with/a deadline to read by, LessWrong will be doing a book club, for which you should read the first section “Predictably Wrong” (10 essays/42 pages) by April 15th. 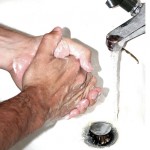 March 22, 2015
Some Tools for Failing to Live Perfectly Well
Next Post

March 28, 2015 Preparing for Holy Week [Radio Readings]
Recent Comments
0 | Leave a Comment
"On that note... I recommend every Catholic and Christian have that post a read. Click ..."
Oktavian Zamoyski Effective Altruism and Caritas [Radio Readings]
"I think too many people have grandiose and unnatural ideas about charity. It becomes a ..."
Oktavian Zamoyski Effective Altruism and Caritas [Radio Readings]
"Jesus wasn’t resurrected as a great miracle simply in order to convince people to believe ..."
John The Two-Lazarus Problem
"The cartoon is amusing, but flawed. One of the four virtues of Stoicism is Justice; ..."
Vulpes Inculta 7QT: Stoicism Man, Semi-Imaginary Money, and ..."
Browse Our Archives
Related posts from Unequally Yoked