Something needs to change here 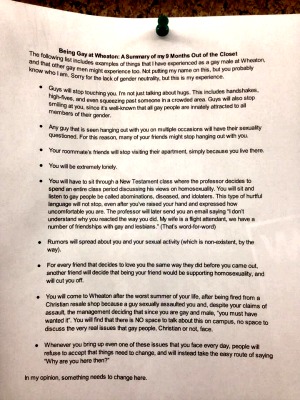 Over on the Unfundamentalist Christians Facebook page, a student at Wheaton College shared with us the above photo of a sheet of paper he found stapled to a campus bulletin board. What’s typed on the paper is below.

Does the person who wrote this sound like a deviant moral reprobate, a danger to our nation and our children, an offense to God? Or does he just sound like a reasonable, good-natured, decent guy who only wants to be treated with the care and respect with which anyone living in a civilized society should expect as their natural due?

Being Gay at Wheaton: A Summary of my 9 months out of the closet

The following list includes examples of things that I have experienced as a gay male at Wheaton, and that other gay men might experience too. …

In my opinion, something needs to change here. 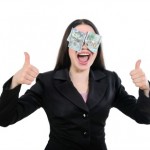 January 29, 2014
If you take Paul “literally” on homosexuality take Jesus literally on money
Next Post 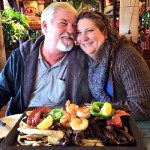 February 4, 2014 Don't Cry for Me Argentina Pants
Recent Comments
104 Comments | Leave a Comment
"6 Bible results for "be kind":2 Chronicles 10:7They replied, “If you will be kind to ..."
Jim Jones Seven ways Christians blow it
"Uh...no?"
Tiny J Seven ways Christians blow it
"GOd came to save us from eternal separation from God by dying on a cross?Do ..."
Bones Did Jesus speak more about Hell ..."
"Eternal separation from God"
SPH Did Jesus speak more about Hell ..."
Browse Our Archives
get the latest from
Progressive Christian
Sign up for our newsletter
POPULAR AT PATHEOS Progressive Christian
1

Workshop: Jewish Authors and Power in the Greco-Roman...
Dear colleagues, We would like to invite you to an online workshop...
view all Progressive Christian blogs
What Are Your Thoughts?leave a comment
Copyright 2008-2021, Patheos. All rights reserved.
error: Content is protected !!