The “great night of Shiva” was this past weekend: Saturday overnight into Sunday.

Because Shiva is a God of meditation, austerity, and contemplation, this festival is much less about frolicking than many others. This is a night for dedication and discipline. It is traditional to fast during the day and then stay up all night praying to Shiva. Interestingly, even though Shiva is very monk-like, he is also the God that women pray to for good husbands and a happy marriage.

How to celebrate, according to The Times of India:

Devotees on this day remain on fast or perform hour long spiritual meditation by following rituals to commemorate Mahashivratri and be blessed with grace. In the early morning, they visit temples to offer cold water, milk and bael leaves on the Lingam, a symbol for the worship of Lord Shiva, after properly cleaning it. Many sadhus on Maha Shivratri visit shrines and offer marijuana to worshipers to spread the significance of the festival. Wearing a garland made from rudraksha and applying turmeric vermilion or holy ash on forehead symbolizes a holy ritual on this religious festival. Holy mantras are also recited and special puja ceremonies are held throughout the night to celebrate Shivratri.

Here is a Shiva Puja:

I’m hoping that you’ll be able to follow this link to a new magazine that I just found out about: Hindu Today. It has a lot of information about Mahashivaratri this issue. (If that link doesn’t work, try this one)

Here is one of the hymns (bhajans) that it is appropriate to sing:

It begins with an intro in Hindi for the first minute and a half. During the bhajan, there are transliterations for following along. Really nice images of people praying too. It is 45 minutes long, so really nice to play and leave going in the background while you meditate on Shiva.

Of course there is always the classic Om Namah Shivaya: 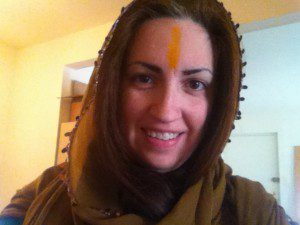 This little glass Shiva Linga I got at the maat in Shrineri on my trip to India a couple of years ago.