Brad and I had a great, though brief, trip to Massachusetts for our Vedic wedding ceremony. (See the previous post for details of our larger intercultural ceremony)

It started with a wonderful airport experience. We flew JetBlue and I think that was my first time with them, but it was very nice. I can see why they are known for customer service. Even making the announcements they used as an opportunity to be cheeky and just…human. Plus they gave us cookies and chips as snacks (even though the flight was only an hour). We went through the full body scan machines, which I like because I was able to go through without taking off my jewelry, such as my mangala sutra. I was really glad that it wasn’t an issue.

The ceremony itself was a wonderful experience.

There really is something to the idea of going through a ceremony that has thousands of years of tradition behind it. I felt so connected to the solid history of Hindu marriage. It was about two and half hours of a lot of Sanskrit chanting, but I liked how long it was because it really gave us a chance to feel it and the weight of being brought together in marriage. 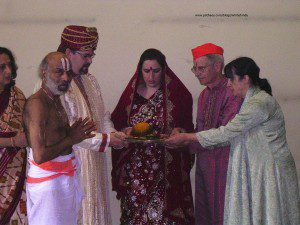 I felt so grateful to my parents for indulging me and supporting me in this. I felt very grateful to my cousin and her husband who arranged it. My cousin translated for the priest and fetched things for him. It was clear that the priest was very fond of my cousin and everyone in the temple knew and loved her three year old daughter too.

My parents sat beside me and Brad was given surrogate parents. They are good friends of my parents whose own son had recently gotten married in the same ceremony. It was very helpful to have them there to help guide us too. (I heard that the father might be writing a how-to book on Indian wedding ceremonies! I am going to get in touch with him so I can help spread the word about it when it’s ready. I think such a book is desperately needed!)

The priest himself was delightful. Though he didn’t speak much English, his joy was palpable and he was happy to join us together. Towards the end he brought us into the main temple area to the swing with baby Krishna and had us push the swing. Then he pronounced, “Next year, babies.” Let’s hope he’s right! 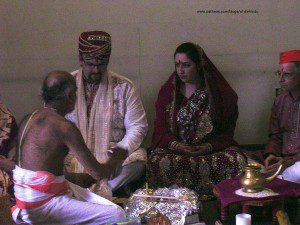 There were only a few guests at this ceremony and then we had more people over later at my parents’ house. Most of the people were SES people that I grew up with as surrogate aunts and uncles. It was wonderful to see them and to feel how much love they have for me and how happy they are to see me happy.

This ceremony felt so much more meaningful than the one we put together. In the end I’m glad we had both. I wouldn’t want to make too many people sit through a two and  half hour, unfamiliar ceremony, but I’m so glad we were given the chance to have it. My mangala sutra was blessed by everyone there, and was even placed around the neck of the Lakshmi murti in the main temple during aarti. 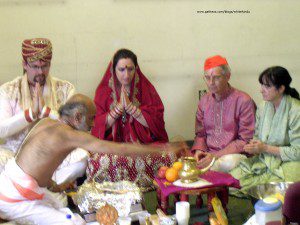 It was neat how life continued on in the temple. We were over in a corner doing a wedding while other people were visiting the Gods or having other ceremonies done. It made it feel like a natural moment in life and community.

My brother took all of these pictures (and many, many more). My surrogate pretend mother-in-law gave me a beautiful salwar suit that I wore for the party later. She also gave me some tips on celebrating holidays in the Maharashtra fashion, since that’s where their family is from.

At the end we were given the consecrated coconut and told to make something sweet with it. I have to wonder what the TSA agents thought on our way home with a turmeric-rubbed coconut wrapped in Brad’s turban-hat in our suitcase!

So that seals it. We’ve been married twice in two weeks! I think that’s plenty 😉 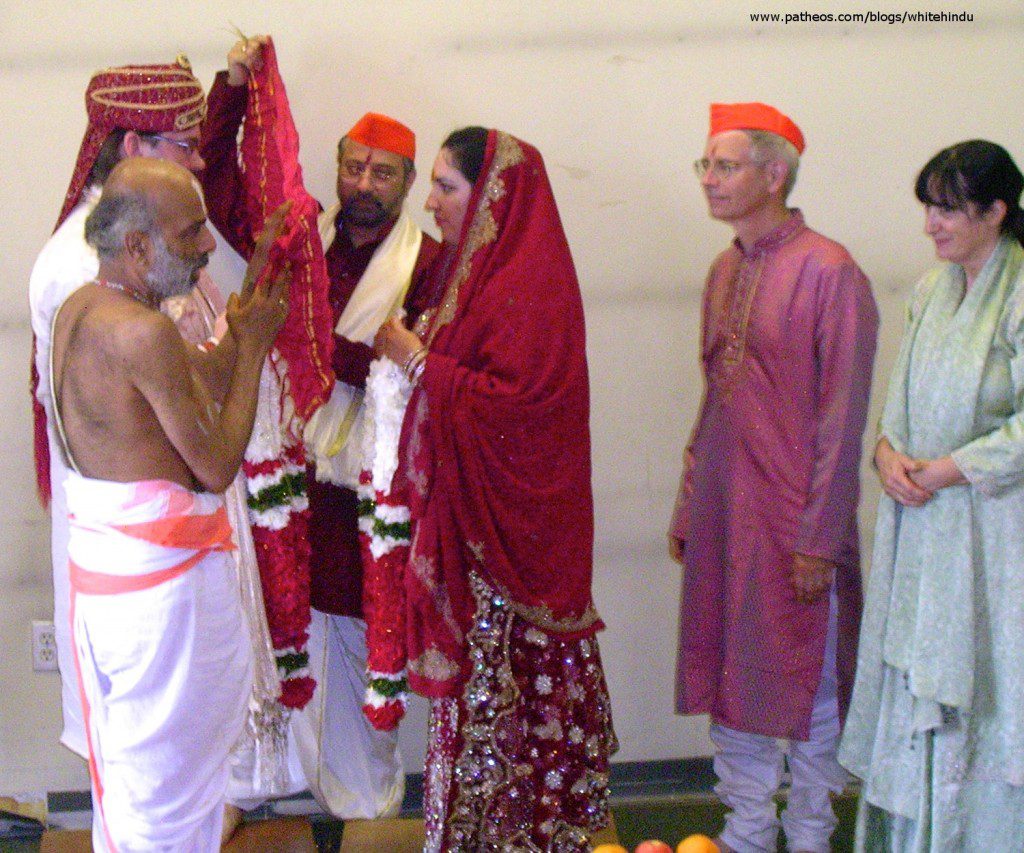 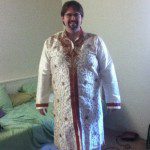 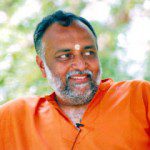 September 3, 2013 Meet a Guru: Swami Sukhabodhananda
Recent Comments
2 Comments | Leave a Comment
Browse Our Archives
get the latest from
Hindu
Sign up for our newsletter
POPULAR AT PATHEOS Hindu
1