Your First Visit to a Hindu Temple

The first time you visit a Hindu temple can be overwhelming or intimidating. Let me give you a rundown of what to expect so you’ll feel like a pro when you get there…

There are sometimes set schedules at Hindu temples, but you don’t have to go at a particular time. There might be services such as the morning bathing and dressing of the Gods. You can arrive for those or you can go any time during the day when it is open (the larger temples are probably open during the day). Check their websites for a schedule!

You’ll want to dress respectfully. (POST: What to Wear to a Hindu Temple) Men often wear a button-down shirt and slacks. Women often wear Indian clothes, though a long skirt and modest shirt would also work. When you arrive, there will be an area for shoes near the door. Probably there will be a rack for them, but still a big pile of shoes on the ground. Try to get yours onto the rack! That’s what it’s there for.

When you go in there may be an lobby area. You might see a sink and foot wash area (which you don’t have to use). It should be clear where the main room is. There will probably be a large open area with alcoves around the sides filled with murtis of the Gods. That set up is typical of South Indian temples. In North Indian style temples you may see one main God or set of Gods and Goddesses at the front with a single altar.

Start at the God who is on your left as you enter. Face him and hold your hands in namaste with bowed head for a moment or (if you’re feeling brave) you can prostrate and bow all the way to the ground. If the Gods are in mini “houses” away from the walls, you can walk in a circle around it (clockwise direction). Greet each God in this way.

Sometimes there will be something going on in front of one of the Gods. If there’s a crowd gathered, feel free to join in at the edges. Check first to see if people are bunched all together or if they are divided by male and female. In some temples or Hindu gatherings there will be a women’s side and a men’s side. At the end of most pujas, a priest will walk through the crowd with various things. First is a tray with ghee lamps burning on it. As you’ll see others around you do, you can hold your hands out to the light and then brush them towards your eyes. The tray will move away from you quickly, but try to repeat three times, the last time brushing your hands over the top of your head. You are taking the essence of the fire into your heart and mind.

They may also come around with a long spoon and pot of liquid. Hold out your hands, right on top of left in a cupped position and they will pour liquid into your hands. Immediately sip the contents and brush any excess over your head. You might be offered a piece of fruit. This is called prasadam or prasad and is considered to be blessed by the God. The priest may come around to mark your forehead with kumkum, ash, or turmeric. Observe those in front of you to see what to expect. It may be different for men and women.

Smile and return greetings in like kind. Rather than saying, “Hi” there might be a particular greeting for this group, such as Hari Om or Sai Ram.

Other good guides include…

What You Will See Inside a Hindu Temple

September 24, 2013
Shiva: Everything You Need To Know
Next Post 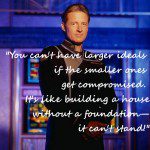 September 26, 2013 It's Easy For Kids To Be Generous
Recent Comments
6 Comments | Leave a Comment
Browse Our Archives
Related posts from The White Hindu