Today we’re going to play a little game. For each thing I mention, you decide if it is something that is relevant to Hinduism as a religion or is part of Indian culture and not tied to Hinduism.

I’ve mentioned before that I find it very difficult to separate out what is cultural from what is religious for a lot of Hindu things. Hinduism having grown and developed closely with Indian cultures, teasing those things apart can be impossible in some cases.

So I want to hear your thoughts about each of these potentially tricky customs. My answers will be below and I hope you’ll give me your thoughts before you read mine! 🙂

What say you? Cultural or Religious?

Bindi and Other Tilak Marks

Taking Off Shoes in the Home 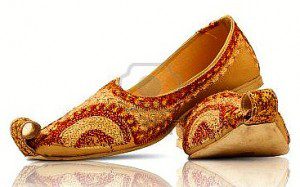 1) I think learning Sanskrit would definitely be an enhancement to a Hindu’s religious life. Being able to read the scriptures in their original form could only be a good thing.

I have been learning Hindi over these last few years. That’s a little more shaky. I do it to make it easier to immerse in community. I’ve also found it to be a great benefit in bhajan singing because the vast majority of bhajans we sing at my group are in Hindi. Also, a lot of instructional information for Hindus is in Hindi. There are several YouTube channels with advice about certain pujas or holidays that are all in Hindi. I have a book on how to perform a Lakshmi Puja that is entirely written in Hindi too.

I feel that until I can fluently speak a modern Indian language, I will always seem like I’m doing things in a surface-level way. My experience has been that learning Hindi shows my commitment to the lifestyle of a Hindu. I think I need to add a South Indian language, though, since I spend most of my time with South Indians and in South Indian activities!

2) Is a sari a Hindu piece of clothing? No. Certainly Indian women of other religions wear saris and there’s no requirement written in any Hindu scripture that women must wear sari. However, wearing a sari to a temple is a way of fitting in. It is the clothing that is most appropriate to wear to mandir as a Hindu (or other Indian clothes, as a woman. Sawlar Suits are good too). If you wear western clothes, even modest and appropriate western clothes, you will stand out as a tourist and a non-Hindu. Men do not have theses options and issues so much. In many mandirs Indian men wear khakis and a button-down shirt. However, when my family visited India, it was expected that my father would wear a dhoti at the maath.

I wear Indian clothes frequently and the reason is (beyond the fact that I find Indian clothes comfortable and beautiful) that many of my clothes were gifts. The very first salwar suit I got was given with the instruction, “I expect you to wear this. I won’t give it to you if you’re not going to actually wear it.” And so I did. My first sari was a gift from an Indian friend at the library where I worked in college. He was going home to India over winter break and he brought me back a sari. I was given new salwar suits by family friends for my wedding. I was given another sari by a friend at my dance class a few years ago. Probably half of my Indian clothing were gifts and the other half bought on the Internet (with the exception of the couple of suits I got myself in Bangalore and Sringeri).

3)  To me a tilak (including bindi) is a religious mark. It marks one as a Hindu and it also has potential to center and focus the mind based on the location of the “third eye” and it can also be a good way to remind one’s self of God each day. That said, if you choose to wear any form of tilak, you will definitely stand out and will be opening yourself up to a lot of questions, stares, and assumptions. I find that wearing a very simple small bindi with a modest outfit does a good job marking me as a Hindu rather than as someone who plays around with bindis because they’re a fad or just because they’re pretty.

4) There are a few different reasons why Hindus might be vegetarian, though not all are. If you are a vegetarian because you interpret ahimsa (non-harm) as meaning not eating meat, then that’s a religious reason. If you’re a vegetarian because you believe that the emotions of the animal when it is killed transfer through the food, then that could be a religious or cultural reason. Though vegetarianism is less common in America, there are certainly many good reasons why Americans might be vegetarian or vegan, so India certainly doesn’t have the monopoly on this one.

5) The reason for taking shoes off when entering a home (or a temple) is a show of respect to the divine. Hindu homes have puja rooms, altars, and/or small temples in them, so one should remove one’s shoes in the same way you would at a full size mandir. However, the reason why removing shoes is a showing of respect is cultural. The west has no tradition of removing shoes for any reason. In fact, in the past doing so would have been seen as quite “uncouth.” Nonetheless, I remove my shoes when I go to temple and so I also remove my shoes in my home.

What other Indian things do you find to be a gray area between Indian Culture and Hindu Religion? 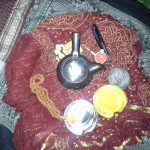 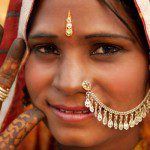 October 25, 2013 Why Do Hindus Pierce Their Nose? [Google Questions Answered]
Recent Comments
1 Comment | Leave a Comment
Browse Our Archives
get the latest from
Hindu
Sign up for our newsletter
POPULAR AT PATHEOS Hindu
1