The Hardest Thing About Blogging

There’s something about human nature that no matter how much praise we get, one criticism burns so deeply it seems to negate all the praise and we fixate on that one negative comment.

As it turns out, blogging is probably best for people with an ability to brush off criticism. People who have internalized that not everyone is going to love you or love what you’re doing. And so be it.

I know that in my mind, but my heart has a hard time accepting it.

Blogging means putting yourself out there to the whole world and inviting people to comment on your life and your choices. If I didn’t want that, I would just do what I do and not talk about it on the Internet.

Yet I like the conversation. I like engaging in discussion of various aspects of Hinduism and racial and cultural issues.

It’s a double-edged sword, as they say. I can use my blog to host these discussions but at the same time it opens me up to criticism of my life and my choices.

I like getting new readers and lots of page views and comments (these are the life blood of a blogger!) but the more readers there are, the more chance of someone not liking me. And when I get one criticism I just shrink. I go over and over and over it in my mind. I obsess over how to fix this person’s view of me. I answer and then I think of more answers and more and more. I make it worse. I wonder if my entire life is built on delusion. I hide under my covers and weep.

I thought I had a handle on having a thick skin. I write novels and that’s another area where you’re very exposed to criticism. If someone doesn’t like your book, then they are going to loudly proclaim to the world that you suck and no one could possibly like this book because it’s utter crap. Never mind that there are hundreds of positive reviews. They must all be wrong. Only this one reviewer’s opinion counts. Cause they didn’t like it. It wasn’t their thing. So you as the author should die in a fire. It’s very rough. (And hey, I’ve been known to dole out harsh criticism to books I didn’t like too. The author on this one handled it extremely well).

But I’ve gotten used to that. I hardly ever read reviews on my novels anymore. I put them out there and some people love them and some people hate them, but it’s my art and it’s my message.

I guess the thing that’s different with blogging is that it is open communication. It’s a two-way street. Unlike a novel where it gets written, published, and then you can leave it to gather praise and criticism and discussion all on its own, the thing about blogging is that it’s about conversation.

That’s its up side and its downside all at once!

Discussion is good but it can also be painful. I wonder sometimes about running away from it all. Live my life without the scrutiny of everyone on the Internet. Then I remember that it’s painful because it’s growth.

It’s good for me to hear people’s critiques and consider them. I may agree and change something. I may disagree and not change. Sometimes I have to let people dislike me. That sure is hard for a born people-pleaser!

I get so nicely insulated by all you wonderful folks that I start feeling comfortable and confident being a Hindu and expressing that Hindu-ness in my lifestyle. I start feeling like I’ve got it all figured out. All the positive comments make me feel like part of the group and just totally accepted as a Hindu.

And then someone new comes along and makes me question everything about my life.

Of course I knew when I submitted my wedding for inclusion at APracticalWedding.com that people could take it the wrong way. The readers there are not the same as my regular readers here who know me and how hard I work to avoid inappropriate appropriation. I chose to put my wedding on view and in the line of scrutiny. Sure, I had selfish reasons. I wanted to expand my audience here. It also seemed right to share my wedding there, since I’ve been a regular reader and commenter there for years. I thought maybe people would recognize me and be glad to see how my wedding turned out.

{Probably not, though. There’s something about being part of an online community that it’s too easy to feel like there’s a “cool kids” group and you’re desperately trying to break into it and they don’t even know you exist. I definitely feel that at APW. I know that’s a common feeling, though. I mean, just look how many of the posts here are “I stopped posting and waited for someone to notice but no one did.” I know not to expect to be known and remembered on Internet forums. But, like I said, it seemed like since I have been a loyal reader from the start, that it was the right place to share my wedding.}

Along with plenty of happy comments, there are people who feel insulted and one is threatening to stop reading APW because of me. Because I’m an “orientalism fetishist” who thinks Bollywood and Hinduism are the same thing. Because me saying that having a Vedic wedding felt like being a part of The Mahabharata is insulting to the holy text. Because I dared to say that Buddhism and Hinduism aren’t too different from one another. Because I must be someone who just “takes the pretty” and ignores everything else about Hinduism. How could APW post something from someone who clearly just steals from other cultures? [Note: the comments at APW have now been removed, since it is against their comment policy to attack people on their wedding graduate posts]

I wish that people would take the time to find out more about me before assuming that I exotic-ise all things “eastern.” But it’s their right to not like me or to feel hurt by me. Yeah, I appreciate the irony that my feelings are hurt by someone whose feelings I hurt. What a destructive cycle that is!

I know that I risk being appropriative. I know I risk people feeling insulted by my very existence. There’s not a lot I can do about that. I am who I am. I hate that me being me is hurtful to some people. I definitely don’t want that, yet I’m not sure how to avoid it. I have to wonder what she wants me to do. Be a Hindu but don’t show it?  Maybe “don’t exist”?

Oh wait, that’s exactly what she wants: “If it’s not a culture you were born into – the quick and dirty answer is ‘don’t do it.'”  So there you have it, the gatekeeper for all things Indian. I am not allowed to be myself. Because my lifetime struggle to express my religion in my life should be boiled down to a “quick and dirty” answer.

{I can’t help wondering how much she knows about Hinduism herself since she says there’s no such thing as conversion in Hinduism even though there are at least two Hindu schools who absolutely do do official conversions and the one I’m most familiar with insists on converts dressing in Indian clothes and taking on Hindu and Indian culture. She’s insulted that I said Hinduism and Buddhism have similarities even though Buddha was a Hindu himself. I suppose she knows what her mother has told her and that’s about it. Oh wait, am I making assumptions? Why yes I am. Exactly as she did to me. It seems a tad racist for her to assume that I don’t know what I’m talking about; to assume that I woke up one morning and said, “I think I’ll have an Indian wedding cause it’s so exotic and mysterious and pretty!”}

I’m really sorry that my wedding hurt someone’s feelings. That criticism is going to stay lodged in my heart for a long time. I try very hard to be respectful. However, I stand by my wedding. I am a Hindu and I live as a Hindu. That’s not going to change. 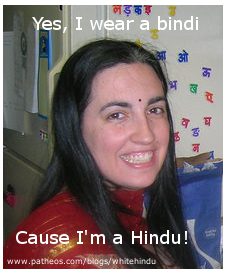 October 2, 2013
Baby Making: More Than You Ever Wanted to Know
Next Post 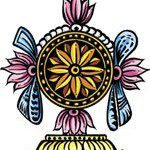 October 4, 2013 Top Posts of September
Recent Comments
0 | Leave a Comment
Browse Our Archives
get the latest from
The White Hindu
Sign up for our newsletter
POPULAR AT PATHEOS Hindu
1