You can’t just study: the three paths to God

Someone made a comment last week (and I can’t remember now where it was, whether here or Facebook) that western Hindus are all about philosophy and not bhakti, which is devotion practices.

He has a point. Leaving aside ISKCON which is full of westerners practicing bhakti, many of us follow Advaita and the emphasis is on learning, reading, studying, intellectually understanding.

In Hinduism it is said that there are three different channels of spiritual growth and each person (or each family or each guru’s school) will emphasize one of these three:

The way that I grew up had a lot of emphasis on study. We read scriptures, we learned the Sanskrit and dissected it. We talked and discussed experiences and applying the teachings to daily life.

Still, it was a very intellectual endeavor, which is something that suits me. I ponder and I think. I think too much, some would say. I want to study and understand everything about the world.

But these three paths are not simply pick one and discard the others. All three are necessary for every individual, I think. Just in different measures.

It’s like the gunas, the three qualities that are present in all things. Everything in the world has a combination of rajas, tamas, and sattva but in different amounts. Some things are predominantly sattvic while others are predominantly rajasic.

I am predominantly a jnana yoga person, but I still need some amount of the other two to progress spiritually. There are times when you have to step back, get out of your head, and just experience faith. Let it wash over you.

And I don’t think all the study in the world does a bit of good without helping and responding to the needs of our fellow human beings.

My own balance is still a work in progress. I study the scriptures and I ponder the philosophical aspects of Hinduism here at the blog. I do bhakti when I go to my Sathya Sai Baba group and lose myself in the joy of singing bhajans and also when I dance bharatnatyam. The seva is the part I still need to work on. I would like to do more volunteering and that’s an aspect of my life that I need to get up to par. 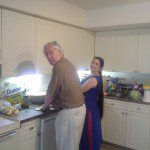 October 16, 2013
OAMC: Once a Month Cooking for the Hindu
Next Post 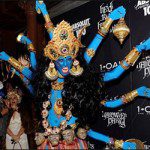