There is an entire genre of blogs that are often known as the “Gori Wife Blogs.” Gori is a Hindi word for white person and it can be derogative. Some people decided to sort-of “take back” the term and apply it proudly to themselves. Others would fit into the category but don’t like to use the word “Gori.” However, the word itself isn’t my point today.

The “Gori Wife” blogs are written by non-Indian women who marry Indian men (Not all are Hindu. Some are Muslim or Sikh).

There are lots of them. There are many who don’t keep blogs and aren’t on the Internet at all. There are many, many non-Indian women marrying into Indian families. All the ones I know work hard to be respectful of their husband’s culture. They take on aspects of that culture and the family’s religion to varying degrees, often taking cues from the family as to how much to get involved.

It seems as though many of the mother-in-laws are delighted and relieved by their American daughter-in-laws learning their culture and taking on Indian behavior, values, dress, etc.

Some women happily immerse themselves in the family’s culture, not feeling any particular connection to any other culture and others fight to maintain their sense of selves and the traditions they grew up with in America.

They are very interesting blogs to read and I enjoy the “gori wife” perspectives on some of the same issues I’m dealing with.

Sometimes, though, I wonder if I am the only one in my situation. I feel a little lonely because in the end, I’m not one of them. I don’t have a mother-in-law guiding me towards a particular tradition. I don’t have the “excuse” of an Indian husband for my interest in Indian culture (and I don’t believe I need an Indian husband to justify my Hindu-ness).

Though there are non-Indian Hindus who are introduced to Hinduism through a spouse but then find that it was the right path for them all along, where are the others like me who knew Hinduism was who they were without anyone introducing them to it? Perhaps some of these women were already Hindus and married an Indian Hindu man because they were Hindu?

Now that I wear a mangala sutra and sindoor, Indian ladies that I encounter in day to day life assume that I’m married to an Indian man. But no. I’m not. I’m the Hindu one.

People really don’t know what to do with that. When they think I’ve married into Indian traditions, they are delighted that I am “agreeing to” Indian marriage traditions. When they find out that I’m the Hindu one, there is usually awkward confusion.

In a lot of ways I grew up Hindu. I didn’t call it that, but it was Hindu philosophy and belief that was instilled in me from birth. Sometimes I feel like I have the most in common with American-born Desis. My Hinduism is colored by my American-ness. I have a lot of knowledge but then some big gaps. I was okay with an interfaith marriage because I knew that nothing could take my Hindu-ness from me.

This often seems like a female issue. I’ve never seen a blog of a man exploring Indian culture and traditions because he married an Indian woman (if you know of any, please do share!). I do know non-Indian Hindu men who discovered Hinduism on their own, not through a wife. Why is it that the majority of stories are either: woman marries Indian man and becomes interested in Hinduism (or whatever his family’s religion is) OR man does spiritual exploration and discovers Hinduism is the right path for him?

I know I’m not the only non-Indian Hindu woman who wasn’t introduced to Hinduism by a man. Where are the others? Speak up and let me know!

December 11, 2013
This 3 Second Trick Will Bring You More Peace Instantly
Next Post 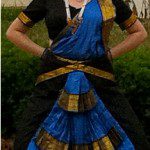 December 13, 2013 White Hindu Conversations: Part Two
Recent Comments
18 Comments | Leave a Comment
Browse Our Archives
get the latest from
Hindu
Sign up for our newsletter
POPULAR AT PATHEOS Hindu
1