The Truth About Women and Hinduism

The Truth About Women and Hinduism June 5, 2014 Ambaa Choate

The comments on my post Not All Religions Are The Same took an interesting turn. When I said that being Hindu is something to take pride in, some people said, well what about gang rape and poor treatment of women?

So I think it is time for me to address this issue.

Hindusim in no way supports the mistreatment of women. Though I say that, I don’t want it to sound like I’m dismissing the real plight of women in India. There are problems and we Hindus need to step it up to deal with those problems. No woman deserves to be raped or harassed, regardless of what a man thinks about her dress or behavior. Dharmic men have self control and respect women regardless of the circumstances. And we Hindus need to take an active role in making sure women are safe.

That said, I do think in America we are getting a twisted perception through our media. The reporting has a strong flavor of superiority, like we’re the “civilized” ones and isn’t it barbaric what’s happening “over there”? That’s bullshit.

I think it’s a lot like the issue we in America have with mass shootings. If that’s the only thing someone hears about America, what a terrible place we must sound like! You never know when your six year old might be shot to death by a classmate. Going to the movie theater could be fatal if someone decides that you’re annoying and they shoot you. It’s absurd that this happens. But what do we do about it? Not much. We feel helpless to change it. (“‘No Way To Prevent This,’ Says Only Nation Where This Regularly Happens” The Onion) We hear about it, we’re outraged about it, but then we’re stuck with not knowing what to do to make it stop happening.

Again, I don’t want to silence or dismiss when bad things are happening to girls and women around the world and here at home. There are some historic ways in which women have been made invisible. Yes, women are suffering in India in many ways. No, Hinduism isn’t to blame. Women in India, just like here in America, need to be listened to and trusted to know their own mind and their own desires. We’re human beings with the same yearning for control over our lives that men have.

It’s often poor women that are suffering and that’s the same thing here at home too. Our poor are not well taken care of either. (When someone says it’s lower caste women, that’s very similar to the class structure that we have. We don’t call it out that often, but we do have a makeshift caste system in America too).

But again I say, Hinduism is not responsible for these deplorable things. Let’s take a look at what Hinduism actually says about its women:

That’s the history of women in Hinduism. Yes, in the stories there are some women who are used and abused but not every character in every story is a paragon of Hindu virtue. The stories have characters of all types and plenty of strong females to go around! It’s a glorious tradition. Not  “be quiet and subservient and hope your husband is nice to you.” Yet in the culture we see that a lot, girls being made to feel lesser and not as important as boys. That is not inherent to Hinduism and comes from other influences. (Check out this Wikipedia section on women’s rights in ancient India). Patriarchy is insidious and it has spread to nearly every culture on the planet. It doesn’t have to be that way. It’s difficult to change because I think men are afraid of giving up the power that they have within patriarchy. They don’t know what it would look like to loosen the reins a little and let women share equally in the power, as is their birthright as human beings. Either that, or they don’t realize the powers they take for granted that women struggle to have.

In some ways, India is better at this than the U.S.. For example, America has yet to have a female president, but India has already had a female Prime Minister.

So what about middle and upper class women in India today?

In 3 Idiots we saw that the expectation on Indian daughters isn’t to stay in the kitchen, it’s to become doctors. “He wants to know the gender so he’ll know if he’s getting an engineer or a doctor for a grandchild.” There’s a lot of pressure on women in “developed” societies; as they gain the right to work hard at a career they are often still expected to keep house and be good at it. I definitely see that pressure here in America too. That’s the next step for feminism (which is not a dirty word, by the way, it only means that women are human beings too), to see men and women working together on running the house and letting each party do the things he or she is most suited to. That doesn’t always fall along expected gender lines.

If you’ve been watching the Bollywood movies with me then you might notice that women often drive the plots. In Swades, the female character is too busy fighting for her school and the right to education to really bother with the falling in love part. In Jab We Met, the female character’s lovability doesn’t come from being quiet or subservient: she’s feisty and loud. Many that we’ve watched pass the Bechdel test (which is, admitedly, a low bar but most American movies can’t pass it).

I think one of the most common issues for Hindu women today is in being protected too much. It seems like there’s a lot of well meaning “for your own good” that happens and not enough trusting women to make good choices for their own lives. Hindu women are often revered but in a way that puts them on a pedestal and doesn’t allow for them to have human failings. Sometimes they are treated like angels when they actually just want to be treated as equals and teammates. Sometimes treating women like Goddesses means snapping and flying into a rage when they behave like a human.

Again, Hindu women are struggling in many ways but Hinduism is not the cause.

To go back to the mass shooting example, do we ever hear in the news stories “Christian boy opens fire and kills seven people”? No. You may say that the shooter wasn’t really Christian, and maybe he didn’t go to church that much but he was still probably technically Christian, as the majority of people in America are. We know how ridiculous it would be to blame the religion when clearly something else is going on with this person. We blame video games or mental illness, but we don’t blame religion unless the shooter specifically said he was killing for religious reasons.

It’s the same thing here. The vast majority of Hindus don’t harm women. A few people in India do harm women and chances are good that many of them are Hindu because that’s the majority religion but that doesn’t mean that their religion motivated them at all. They may well be Hindu in name only, as so many Christians here are. Or they may be devoted Hindus in some aspects of their lives but leaning on tradition and history (instead of what is actually in the teachings) in other aspects. At the same time, it is a mistake to think India is synonymous with Hindu. There’s a lot of religious diversity in India.

As someone pointed out in the comments on the last post, we often hear about violence or people’s rights being trampled and the motivation is clearly religious. Christians and Muslims who have some screws loose are able to find quotes in their scriptures to support their bad behavior. They can point to a verse of their scripture to say why they think it’s okay to stone people to death, to kill people who are gay, etc. Hinduism has no such scripture. When a Hindu does something terrible, it is not supported by anything in the religion. He’s acting on his own.

To say that I am “picking and choosing” bits of Hinduism when I say that Hinduism doesn’t support the mistreatement of women is absolutely untrue. I’m not changing Hinduism to suit my needs; Hindu teaching is very clear that women are just as divine as men.

But that doesn’t mean that we as Hindus can turn away and ignore the suffering that happens in our own backyards. Even if we are not responsible for the attrocities, it is still part of our dharmic duty to protect the vulnerable. In the kali yuga it’s very difficult and the forces of adharma are very strong, but we need to try. We need to do all that we can. At the same time, women and men can work together to help and protect the vulnerable. Women need respect and not to be told what’s best for them by someone else. Listen to women and let them tell you what they need. Believe them when they tell you the things that are making their lives difficult.

The media tries to sell us this idea that men and women are on opposite sides and that we’re fighting a war against one another. This attitude just makes us all into losers. We are on the same team and we can work together so that everyone can live fulfilled and happy lives. 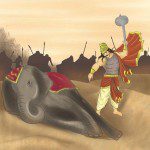