I hope everyone had a great Deepavali! Mine was quiet, but I did make some sweets for my friends.

Today is a little off topic as I continue to work with Patheos’s Pagan channel and my friend Peg. (This is the post that was supposed to go up on Friday, my apologies for the delay). This week Peg asked me some questions about Hallowe’en and how I’ve celebrated it in my life.

It brought back a nice recent memory of when I joined some Indian friends for their first ever pumpkin carving!

Did you celebrate Hallowe’en growing up? In school, at home, or both?
Yes. I enjoyed Halloween a lot as a kid. I remember going to a school party when I was in first grade and I won a skull flashlight. Winning something was so exciting! For a while I dressed up every year in a Cleopatra costume I got from my cousin. I did it for probably five years in a row. In high school I started a tradition of coming to school dressed as a literary character.
Did your family have any Hallowe’en customs or traditions? If your family did not celebrate, do ou recall having any fun memories of Hallowe’en with your friends?
Ambaa: I remember apple bobbing and my dad carving pumpkins with me, giving my mom the Almond Joys that I’d been gotten, collecting change for Unicef.
Peg: our school always had a costume parade. My mother made all of our costumes, usually on the sewing machine but sometimes putting together creative objects; we often won prizes for the best ones. She’d make homemade treats, too, like cookies, candy apples or popcorn balls. The scare around contaminated treats back in the 1970s put an end to that and everyone was expected to had out storebought candy. My mom was upset about that; I remember the first year that happened, and one kid burst into tears when he realized he could not have one of my mom’s delicious homemade caramel popcorn balls.
What is your favorite Hallowe’en memory?
Ambaa: It’s hard to decide.  Wining the flashlight was really special. Dressing my little brother up in his mouse costume was special. Carving pumpkins with my family was special. And actually, I had a great opportunity recently to share that joy with others. One of the Indian families in my community decided to do a pumpkin carving event. I soon discovered that I was the only person there who had any experience carving pumpkins for Halloween! It was great getting to share that with so many people that it was new to. It was great sharing my experience and helping people figure out what to do.
Peg: I went as Cousin It (from the Addams Family) one year; the costume was made from a basket I wore on my head that had long green strips of crepe paper tied to it. The paper kept getting torn. But everyone kept remarking what a great costume it was. It got a bit wet that night as it was slightly rainy for trick or treating; the green paper stained my clothes underneath. definitely the most memorable costume ever!

What do you think about the huge explosion of interest in celebrating Hallowe’en currently?
Ambaa: I love it, actually. I guess it happened because us kids who had such great Halloweens in the 80s and 90s have grown up but never stopped celebrating it. I went to Halloween parties in college and I’ve continued to go to them, to host them, to dress up in costumes. It’s a great opportunity to have fun with dressing up. It’s like cosplay for people who don’t go to many cons!
This year I’m knitting my husband the sweater from The Big Lebowski. He’ll be The Dude and I’ll be Maud.
I enjoy Halloween so much but for me it is completely removed from religious significance and is only for fun. I can see how that attitude could be hurtful to those who have Hallowe’en as part of a religious tradition!
Peg:  Well, to be honest, I often find it troubling. There is so much mass-produced crap for sale in the stores and the big commercial brouhaha seems to start earlier every year! And the emphasis is still so much on candy and silliness. It is also true that Hallowe’en parties are becoming a hugely popular pastime in this country I went to two really amazing ones this past weekend; with huge spreads of food, amazing decorations and incredible costumes. If everyone is having fun, why not? I do think that dressing up and putting on another persona is a very potent tool for personal transformation, if only for one night so when peel enter into the spirit of the holiday in this way, taking it seriously but also enjoying themselves, it does make me think maybe all the commercialization is a good thing on some level. But as for awareness of honoring the dead, no, I don’t see much of that. Maybe our culture is simply too out of touch with our awareness and acceptance of mortality that we don’t want our holidays to reflect such topics? Then again we also see a HUGE emphasis on horror films, books, comics and other media at this time of year; surely these texts are making people consider the spirit realm, even just for a minute, hmm?

Do you think Hallowe’en could ever be made into a more sacred or spiritual holiday that honors the dead? Or is it mainly for fun and celebrating scary imagery?
Ambaa: I’m not sure that there’s any chance for it to be reined in from what it has become. I don’t see people rethinking it. Makes me think of the “remember the reason for the season” slogans that come out around Christmas. But I think if people were to do a similar campaign for Halowe’en there would be little more than eye-rolling.
I’m sure individual families could celebrate it in a more spiritual way, but I doubt that’s going to come back into the culture.
Peg: I think we may be getting there; social media allows for more sharing of unusual and little-known views and the Samhain memes are right up there with the Hallowe’en ones, and maybe some folks will wonder and learn about contemporary traditions that honor the dead from a pagan perspective. Oddly enough, this spiritual path may even make developing that awareness easier for some folks, because the imagery is so close to what people already love about Hallowe’en,.Then again isn’t what what the uber-Christians are afraid of? The association of Hallowe’en with Satanism and the occult has caused some communities to ban celebrations, costumes and decorations entirely…

***
This is one of those holidays that is losing its meaning as people celebrate it however they want whether they have a connection to the culture or not. I’m not sure how I feel about it. I do love Halloween as it is celebrated in a secular way but I feel a little guilty to be misappropriating it from Pagans.
There’s also, of course, every year issues of people choosing costumes based on other people’s ethnicities. “Exotic” Indian is not a good costume! It does make me cringe to see people just wearing normal everyday Indian clothes as a costume.
Previous Post 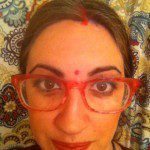