What Does Namaste Really Mean?

It gives me a bit of a twitch when I see people giving super poetic translations of the greeting “Namaste.” Sometimes people say to me, “Wow, isn’t it amazing how much meaning can be packed into one word like that?” and I say, “No. That meaning might be implied but it’s not what the word literally means.”

A translation of “My divine soul recognizes the divine soul in you” is lovely and very much in keeping with Hindu belief. But the word by itself translates directly as “I bow to you.” 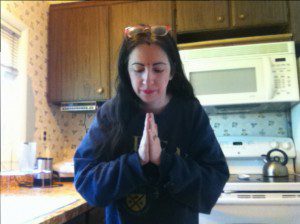 Namah is the verb “to bow” in Sanskrit. Sanskrit uses a complex system of endings to show the relationships between words (unlike English, which uses word order).

When I was growing up we had a short prayer that we said before and after every activity: Om Param Atmane Namah

Param is supreme. Atman is Self, the -ne ending means “to ____”. Namah is bow. I bow to the supreme Self. (Because there seems to be some confusion in the comments, Self here means the Supreme Lord of Creation, the True Self of All)

-te is an ending that means “to you.”

So Namaste means “I bow to you.” It’s that simple. It’s usually accompanied by an actual physical bow.

Namaskar is another version, which is a bit more formal, I believe.

But for many, Namaste is nothing more than “hello.” I feel like assigning these dramatic definitions to Namaste is a way of exotifying another culture. 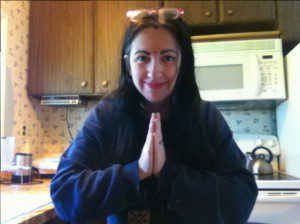 So it can seem pretty odd when I see someone with a tattoo that says Namaste. I hope it reminds them to see God in everyone even though that’s not a literal translation. 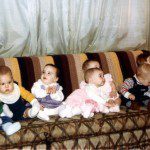