Can You Pray Your Way to a Baby?

Whenever I write something about my process of trying to conceive I always get some super obnoxious comments on Twitter.

Before I went to India I asked for suggestions of temples I could visit that are known for fertility prayers. I didn’t get many responses but one person said “Yeah, it’s called a fertility clinic.”

Which was not at all what I asked for. I found it incredibly rude and this person was clearly making assumptions about me. Like that I’m someone who would rather pray and hope for the best than take action to achieve what I want. And that’s not the case.

I am already going to a fertility clinic and following what I need to do scientifically. But what I asked was if anyone knew of a place where I could ALSO offer prayers. And what’s wrong with that?

This time I wrote my post Monday about how I’m using an intense diet program to heal my infertility condition and one person on Twitter directed me to a site that had a Hindu fertility prayer I could say. When I thanked her for sharing that I got a tweet that said, “That’s stupid. You can’t pray your way to a baby. Try IVF.”

That one infuriated me.

As though one should just try IVF. The most expensive and invasive and intense fertility procedure in existence is something that you should just leap right to without a thought.

I may one day be needing that but there’s a lot of steps along the way between where I’m at now and IVF. In the meantime I am saving up in case it does become necessary.

So yes, I’m doing the work. I’m taking medication and working towards treatments. But I also like to pray about it.

I don’t see why I shouldn’t do both.

Even though I’m not a big believer in using prayer to ask for things and I don’t expect to plead the Gods into giving me this desire, there are some other benefits of prayer. For me…

1) As a destresser. The process of trying to have a baby can be very stressful and overwhelming. Prayer helps to calm and center.

2) To feel like I’m making progress. In the process of trying to get pregnant when you have fertility issues there is a lot of down time. A lot! Whether you’re checking for ovulation with test strips, temperature, or you’ve been injected with drugs to force ovulation, you are always going to have to wait two weeks to find out the result. Every cycle there’s a wait of two weeks before you know if anything you did worked. Two weeks feels like an extremely long time when you’re waiting to find out if you’re pregnant.

During that wait time, it really helps me to be able to do something that makes me feel like I’m still actively moving towards my goal. 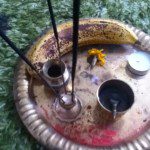 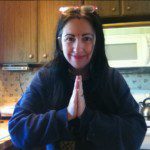 May 15, 2015 What Does Namaste Really Mean?
Recent Comments
16 Comments | Leave a Comment
Browse Our Archives
Related posts from The White Hindu