What a week it has been! Super busy. Brad had a birthday party on Saturday and then I had an eight hour work shift on Sunday. Monday I had an appointment with the midwife, which meant dropping Brad off at work early in the morning and driving about thirty minutes. I find that pretty exhausting so I was beat for the rest of the day. Then Tuesday I got a surprise work day. I had thought I was working Wednesday but it was actually yesterday. So here I am finally getting a chance to sit down and tell you how Diwali went for me!

First we went to a party at my friend Anuradha’s house. We brought some board games to teach people and some craft supplies. Mostly the kids did the crafts, making clay diyas from Sculpey and painting glass votives. Everyone bought finger foods a few of which I was able to enjoy.

I have been having a hard time in the evenings. That’s when the “morning” sickness has been hitting me. The last few weeks I’ve been throwing up most evenings. So luckily the party was in the afternoon instead of evening, but I was still worn out by it and ended up napping in their spare room for part of it!

On Wednesday I wanted to go to the celebrations at the temple but again I’m in rough shape by evening and I couldn’t face going out of the house and dealing with crowds, etc. So we had some friends over and fed them Indian sweets and snacks. 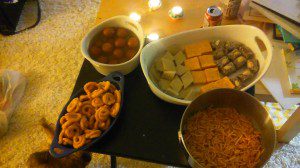 I lit all the candles in the house and put on my outdoor lights. I used some rangoli molds that my Dad got me in Sringeri on the pathway outside our house. 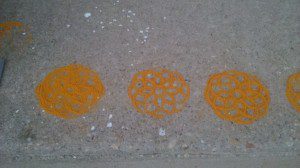 It was a nice Diwali, though a quiet one.

This week ends the first trimester for me, so most people are saying I’m going to start feeling a lot better and have more energy for the next three months. I hope they’re right. So far this experience has really flattened me. 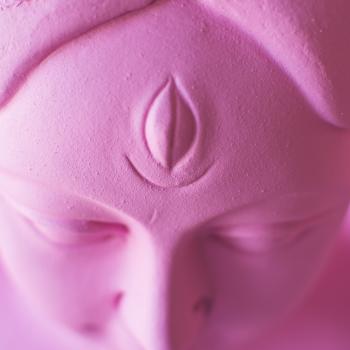