The Problem Is Larger Than I Thought

I spend so much time within my Hindu community that it’s easy for me to forget just how little most non-Indian Americans know about Hinduism. Every once in a while something happens that really opens my eyes to just how out of touch people are.

One example is a friend on FB posted this quote from an article (the actual premise of which I am totally on board with!): ” “God is not a Christian. God is not a Jew or a Muslim or a Hindi or Buddhist. All of those are human systems, which human beings have created to try to help us walk into the mystery of God. I honor my tradition. I walk through my tradition. But I don’t think my tradition defines God.””

I wrote, “Hindi, eh?” and my friend did not even know what I was getting at. But okay, at least we’re being included and I guess I can understand that it’s just one letter difference and people have trouble with that.

More distressing to me was when I went to see a play written and directed by a friend. He did a great job and I wanted to be supportive, but I was bothered by a character where there was some confusion over whether she was Muslim or Hindu.

Her name was Fatima Shah and she was wearing a headscarf. She was also wearing sparkly bindis over her eyebrows, which seemed ridiculously formal for her otherwise casual dress. So I brought that up to him and I found out that my friend had left the actress to do her own research on it and “the actress really wanted to look into being Hindu, but somewhat reformed.” He said she brought him research about the red bindi meaning marriage and since her character was just engaged they went with the sparkly one then they added more for stage presence.

So then I was even more disturbed! How could this character be Hindu? There was no way. It was too late to change anything for the show but I asked him to consult with me next time he wanted a South Asian character. As I often say, if I don’t have the right information I can find someone who does. Better that they ask than be misinformed.

It’s hard for me to face that one of my own close friends doesn’t understand the difference between Hindu and Muslim.

And I don’t know what the solution is. Are people going to learn somehow? Will there ever be a time when basic knowledge of world religions is a given? 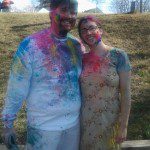 March 24, 2016 No Holi For Me This Year
Recent Comments
14 Comments | Leave a Comment
Browse Our Archives
Follow Us!