The Temple and Women’s Periods

This is not really a subject I ever planned to talk about. But now I realize that I’m not the only one who is questioning tradition on this issue. So I think I need to admit my feelings about it.

Okay, to back up for a moment, tradition dictates that a woman is ritually “unclean” during her menstrual period and does not go to the temple or worship during those times when she is bleeding.

However, I will admit that I have never followed this rule. I don’t think it’s anyone’s business but mine when I’m on my period. I also cannot get on board with the idea that this natural process of my body is in any way unclean, dirty, or bad. So yes, I do still go to temple even when I’m on my period (don’t tell on me!)

Hinduism is not the only religion with this particular taboo. A lot of older cultures connect periods with ritual uncleanness. And while I usually respect ancient traditions and trust that there are good reasons, this one is something that I think needs modernizing.

There are reasons people will bring up for this. But honestly, they all sound like excuses to me. Here are some examples:

So I think it comes down to your decision, ladies. As of yet there is no one standing at the door checking your underwear for blood (there is actually a dude who wants to create some kind of period-detecting machine to keep us out!). You have to decide if you want to go with tradition on this one or not. As I said, I do not. I believe that my menstrual cycle is no one’s business but mine!

To get a Hindu male perspective on this, I really found this article insightful: Can a Female Enter a Temple or Perform Puja During Periods?

A young Indian woman’s perspective: My Country’s Problem with Menstruation

Menstrual Taboo – Why Girls Can’t Go To Temple During Menstruation?

April 26, 2016
Bigger the Murti More Powerful the God?
Next Post 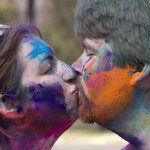 May 2, 2016 For New Readers
Recent Comments
35 Comments | Leave a Comment
Browse Our Archives
get the latest from
Hindu
Sign up for our newsletter
POPULAR AT PATHEOS Hindu
1