I’ve started to stumble upon people doing videos about their journey to Hinduism! So pleased to find that. So I thought I’d gather all the ones I could find. Sharing them is not endorsement. I don’t always agree with everything these Hindu converts said but I am heartened to see so many finding the joy and satisfaction in Hinduism like I have.

First off, here is mine!

None of the other people in these videos is in the same tradition as me but it is easy to find the common threads of Hinduism that connect all Hindu sects and varieties. I will admit that some Hindu converts are more what we might call “woo-woo” than I am and if you go exploring on their channels you will find stuff that I find pretty weird, but I am not the arbitrator of what is true so you can judge for yourself!

Love that she addresses this misconception that one goal means all paths are the same. I feel the same way she does that Hinduism has the clearest path to the one goal. She also discusses the false idea that following Krishna is the same as following Jesus and so you may as well be Christian. (Don’t love making fun of atheists). Her experience with Mr. Malhotra sounds rather better than mine.  It is helpful to hear about the disgusting tactics of Christian missionaries in India. (See her video on why Christian missionaries are actually bullies trying to destroy culture).

She is more..new agey? than I am. I tend to be a more grounded and practical-minded person so I don’t always “get” the people who have transcendent experiences and are deeply connected to the subtle world. This was actually something that almost stopped me from giving my now-husband a chance! I thought he was too new agey.

After exploring a number of different religions, Stephen Knapp found the Gita to satisfy all his spiritual needs. He is actually a well known non-Indian Hindu and an author many times over: http://www.stephen-knapp.com/ I didn’t realize that he had videos, though!

Lovely interview on the basics of Hinduism, including what sets it apart from other world religions. “There is no heaven or hell. All people are on one path, and that is the path towards God.” And I love her description of finding Hinduism. Great answers all around.

Nice to see so many people at this event! I don’t often see events organized in the west that focus on Hanuman.

Kind of remarkable how many of these stories are of people going from Catholicism to Hinduism! I wonder why that is. Maybe nothing but a small sample size, of course.

The name question. Something I’m still pondering. It seems a number of these people have the same guru. They are wearing the same jewelry (earrings and necklace). I only just heard about this guru, Nithyananda, and I’ll have to look into it further. Particularly since a lot of non-Indians seem to be joining him. It was a commenter on my Youtube channel who clued me in on this guru. (I *think* this is him)

Do you know of any other non-native Hindus with video introductions and/or Youtube channels? Let me know! 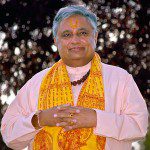