UPDATE: See also this post “How to become a Christian“

Very often people confuse the two these days. The Evangelical movement has always been a movement within the wider Christian movement. Often it has been accused of believing that only other Evangelicals are really Christians. It is no wonder then, that some today do not like it when people suggest they are probably not an Evangelical. The latest in a long line of examples of this is a recent debate over whether Rachel Held Evans is an Evangelical or not. Answering the question “What is an evangelical?” is far from easy, but I will attempt it in my next post. Clearly though, if “Evangelical” is a subset of “Christian” we do well to first understand what is the meaning of Christian. I have always been taught to never assume anything.

Having a clear understanding of what is a Christian is very important. However, when we look at many statements of faith for Evangelical organizations, they actually often in fact define Christian doctrine that many from other wings of the church could affirm. Thus if used as the meaning of “Evangelical”, such statements are surely way too broad. Equally, many other attempts to define Evangelicalism quite rightly look at certain aspects more unique to the movement, but in doing so often fail to make the point that Evangelicals do in fact also hold very tightly to those truths that all Christian movements adhere to.

As hard as it is to define an Evangelical, I believe, however, that the Bible is very clear about what a Christian is. The word Christian appears in only a few places in the Bible, In Acts 11:26 we are told “the disciples were first called Christians in Antioch,” clearly stating that a Christian is a disciple of Jesus, who is one who has been taught to obey Jesus (see Matthew 28). Then, according to Acts 26:28 you can be persuaded to become a Christian, by listening to someone explaining the message about Jesus’ life, death, and resurrection. In 1 Peter 4:16, we are warned it is possible to suffer for being a Christian and encouraged to “glorify God in that name.” The Greek word used, “christianos” is actually based on a Latin practice of simply adding “-ianos” to a name to indicate the followers of that name. So Christians are simply followers of Christ, in exactly the same way we still do today (Eg Keynesians follow Keynes views on economics.)

In my book, I define a Christian as follows,

Almost everyone who would call themselves Christian today would identify with this definition. Certainly, for example, despite controversy about her evangelical credentials outlined above, Rachel Held Evans says she believes in the physical resurrection of Jesus. Here on Patheos there are a number of fellow resident bloggers from a broad range of Christian denominations. I will approach some of them from the Catholic, Evangelical and Progressive Channels to confirm this, but I predict that almost nobody would argue with it.

It is of course worth pointing out that biblically this “belief” is no mere intellectual assent. It is a deep heartfelt orientation of the heart towards trust and devotion. It involves a radical change in our worldview and approach to Jesus. Thus in Acts “believe” is a synonym for “repent.” It is also very much about a journey which is why the early believers were called “followers of the Way” or “followers of Jesus.” So, being saved, which is very much an act of God, is the beginning not the destination. Thus, we are often saved on a fragment of truth, but we can expect to grow in our knowledge of God. Faith is trust in the person of Jesus to save us more than it is agreeing with a set of doctrines.

The belief that Jesus, having died for us, was raised bodily, leaving behind an empty grave and folded grave clothes gave birth to the Church in the first place. Throughout history no major group has used the name “Christian” without believing this. Whether you meet someone who says they are an Eastern Orthodox or a Pentecostal, you will almost certainly find they believe that Jesus rose again. There are some in recent times from the more progressive wing, the liberals, who do still want to use the label “Christian” despite denying that Jesus body literally left the tomb. To be honest, however, historically they really do not have any claim to do so. As has often been said, “If Jesus did not really rise again as he promised, why bother listening to anything he ever said?”

This broad definition is inspired by a phrase in one of the Apostle Paul’s letters. In it he says, “If you confess with your mouth that Jesus is Lord and believe in your heart that God raised him from the dead, you will be saved.” (Romans 10:9)

Paul, lists only two requirements here: First, openly confess the Lordship of Jesus, which surely implies both that he is God and to be worshiped, and that I have determined to follow him. He is not described as “a” Lord, and so he will not tolerate any rival Lords in the life of a believer. To make Jesus your Lord surely implies trust in him as good, the only one able to save us from our sin, and worthy of following single-heartedly. Second, believe Jesus rose from the dead. Clearly, such a belief includes the idea that he died, and the Bible is clear that he died for our sin. Elsewhere Paul summarizes the gospel as “Christ and Him crucified.” (1 Corinthians 2:2, and 1:23). Believe that he died for us, was raised for us, and is now ruling in heaven for us, and determine to follow him, says Paul, and you are a Christian. Nobody should dare make the gospel any more complicated than that.

Of course, such a simple declaration has massive implications. How can we call Jesus “Lord” and not do what he says? The verse says nothing directly about a changed life as a result of such a declaration, but surely it is inevitable that such radical beliefs will lead to a radical transformation? Most Christians have always argued that the moment you put your trust in Jesus in this way you are saved. What comes afterwards is simply the result of the change that happens the moment you become a Christian. We do not have to wait until we are living a good life before Jesus will accept us. We come to him as we are, are welcomed home by him like the prodigal son, and then he is committed to change us.

This verse tells us if we call Jesus the Risen Lord, and mean it we are saved. The differences between different types of Christians are merely this: differences about what we believe are the implications of Jesus resurrection for us today. We do not argue about whether or not Jesus rose again. We argue instead about how we should live individually and within our church communities in light of this event.

So, this definition of a Christian is both unifying as it allows a very broad group of people today to say “Yes! I agree with that!” and yet it makes room for the fact that many of us disagree about precisely what we should believe and how we should act and light of that. It also makes clear how difficult it is to judge whether someone else is a Christian or not. When you are looking for an outward confession, an inward reality, and a life that in some way matches up with that, you can see that judging who is in or out is practically impossible. An individual Christian can become reasonably confident of their own salvation, but should be careful before he dismisses another as “obviously not saved.” Who are we to judge our brothers? God will judge all of us.

There are some today who may take different views of what it means for Jesus to be both man and God, but it is highly debatable that there is can be any such thing as Christianity without a belief in the Trinity. Basically the Trinity is the way in which Christians square the idea that Jesus is divine which is essential to Paul’s summary above, with believing in only one God. Every major Christian Church also holds to the truths outlined in what is usually called the Apostles Creed (although Eastern churches prefer to use the Nicene Creed which is in many ways similar), which i include below:

I believe in God the Father, Almighty, Maker of heaven and earth:

And in Jesus Christ, his only begotten Son, our Lord:

Who was conceived by the Holy Ghost, born of the Virgin Mary:

Suffered under Pontius Pilate; was crucified, dead and buried: He descended into hell:

The third day he rose again from the dead:

He ascended into heaven, and sits at the right hand of God the Father Almighty:

From thence he shall come to judge the quick and the dead:

I believe in the Holy Ghost:

I believe in the holy catholic church: the communion of saints:

The forgiveness of sins:

The resurrection of the body:

And the life everlasting. Amen.

There has been very little debate over recent centuries about anything in this creed aside from some discussion about precisely what it means to descend to hell (and some modern Christians including Wayne Grudem deny this concept altogether.)

To conclude this post, I really do wish we would accept a suitably broad definition of what is a Christian. As important as doctrine is, the Bible is clear that the issue of salvation is purely about our relationship with Jesus and his claims. Now, if only the next post, “What is an Evangelical?” would prove to be so straightforward!

UPDATE: Responses to this post from around the web: 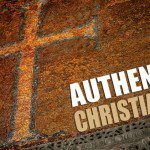 October 24, 2012 What is an Evangelical?
Recent Comments
81 Comments | Leave a Comment
Browse Our Archives
Related posts from Adrian Warnock