The role of faith and hubris in Paganism

The role of faith and hubris in Paganism December 23, 2012 John Halstead

Last week I came across a word that, ten years ago, I would never have thought to see in a Pagan context: “faith”. In fact, I came across it several times:

The first time I noticed it was after reading Christine Kraemer’s post “Opening a Pagan Theological Dialogue” at the Sermon in the Mound. Encouraging Pagan theo/alogy is a subject dear to my heart. Christine provided a link to her book on Amazon, Seeking the Mystery: Introduction to Pagan Theologies. After downloading the sample, I purchased the book, and I am enjoying working my way through it. One part in particular caught my attention: the discussion of “hard polytheism”. There I read this fascinating quote from Hellenic polytheist Sarah Kate Istra Winter’s blog, a forest door:

“I fear that paganism may not have the strength to last in the long-term if we ourselves do not firmly believe in our spiritual reality. You don’t see Christians following up a discussion of accepting Jesus into your heart with some caveat like ‘or if you don’t believe in Jesus, just imagine a similar loving entity or warm light.’ Or ‘if you need the help of a saint and don’t like any of the ones you’ve read about, just invent a new saint in your mind that betters suits you, and contact them.’ As if these things are all the same. Yes, I know that many Christians go in the opposite direction and become strictly orthodox, insisting on every detail of belief, and I also know that this is what many pagans are reacting to. But it’s time to stop reacting and start building a real, solid faith that will last – and for that you need, well, faith.“

I came to Paganism through authors like Starhawk who explicitly denied that faith had any role to play in Paganism, so to see faith invoked in this context came as a bit of a shock.

Then I saw Jason Mankey’s post about the Connecticut shootings, “Sometimes Faith Has No Answer”. And then Eddie responded to my post about my love/hate relationship with Paganism by saying that he uses the term polytheist instead of Pagan “since I have faith and all that jazz.” And finally, I came across this striking description of faith by Hellenic polytheist Elani Temperance on her post, “Self, in relation to Deity”:

“[…] when it comes to the Theoi–I say ‘how high’ when They say ‘jump’, regardless of what is requested of me. It also means that I put my faith in Them. When I pray and sacrifice to Zeus the Thunderer for a day without rain as I do my rounds outside, I don’t bring an umbrella. I trust that Zeus will either honor my prayer through kharis, or will have good reason not to. Who am I to go against His wishes and stay dry, regardless? To me, that is hubris.”

Wow! That’s not just faith, but if-they-told-you-to-jump-off-a-bridge kind of faith! Who are you to go against Zeus’ wishes? I couldn’t help but respond:

“You are a beautiful and incredible human being is who you are. Who is he to say you have to get wet? The polytheistic gods, as I understand them, are not necessarily “good” and they are not omni-benevolent. They are as flawed as human beings, but they just have more power. Why bow down to power, if it is not paired with virtue?”

Faith means different things to different people of course. It could mean believing in something without any rational or experiential basis for such a belief. I don’t think this is what most people mean when they say they have faith. I think this is what people mean when they talk about other people’s faith. But faith can also mean being “faithful” or true to a relationship when the object of that relationship is no longer present. It means continuing to worship the gods when they do not manifest. Continuing to believe in their goodness when bad things happen. It is not so much a belief in things you can’t see, as continuing to act as if the persons (whether a spouse or the gods) you have a relationship with are present when they aren’t.

It is in this sense that polytheists seem to use the word “faith”. Indeed, Christine Kraemer introduces Sarah Winter’s quote above with these words:

“Hard polytheists tend to take the issue of belief much more seriously than other Pagans. Like other Pagans, they usually emphasize that their belief in the gods is based on their personal experiences of them. However, hard polytheists see belief as a necessary part of the passion and devotion that is part of a committed relationship.”

This got me wondering about how faith might come into play in other forms of Paganism.

The four centers of Paganism

I recently attempted a description of the Pagan community, not as one umbrella, but as multiple overlapping penumbrae. I suggested three possible “centers” for these overlapping circles: deity-centered, earth-centered, and Self-centered (or Self-centric). In the comments to my post, it was suggested that a fourth center was needed, community- (or folk-)centered. Most people within the Pagan community fall into the overlapping area of two or more of these circles, but I think they are still useful categories for describing Pagan experience.

Each of these groups has a unique way of relating to the “other” that transcends our individual selves. Each defines that “other” differently. Each gets something different out of the relationship. And each has different challenges which arises from the nature of the transcendent with which the group seeks to enter into relationship.

In some ways deity-centered Paganism resembles other theisms, including charismatic forms of Christianity and the bhakti cults of Hinduism. For deity-centered Pagans (i.e., polytheists), the gods are that which transcends the individual. Polytheists seeks to enter into relationship with the gods, and passionate devotion is what primarily characterizes that relationship. An increased sense of power is what the gods bring to the relationship; power is what distinguishes the gods of polytheism from mortals.  The unique challenge presented by deity-centered Paganism arises from the nature of the gods, specifically from the fact that the experience of the presence of the gods is transitory. 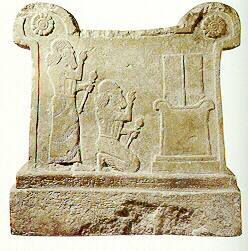 Most polytheists will not feel their presence all the time. And sometimes, when they are invoked, they do not come. Thus, polytheists seek to develop faith for the times when the presence of the gods is not experienced, and for this reason faith seems to be a core virtue of deity-centered Paganism. 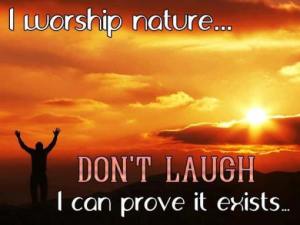 The unique challenge presented by earth-centered Paganism arises from the nature of Nature, specifically from the fact that nature demonstrates no particular love or care for the individual. Connecting to something which does not care about us can be a challenge. Thus an experience of interconnectedness with the non-human or more-than-human world is a core virtue of earth-centered Paganism. This sense of interconnectedness is sometimes called “re-enchantment”, and it refers to an expanded awareness of the nature of reality and of our participation in the natural world which Levy-Bruhl called “participation mystique” and Owen Barfield calls “original participation”.  A feeling of being part of a greater whole is what Earth-centered Pagans get out of the relationship.

Thus, the nature of the transcendental to which different Pagans relate defines the role that faith plays in that relationship. The thing that distinguishes deity-centered Paganism from the other three groups seems to be the degree to which deity-centered Pagans insist on the otherness of the gods. Each of the groups has an “other” which in some sense transcends the individual self, an “other” which might in some sense be called “God”: Nature has been described a “God” by pantheists. Jung and Vedantic philosophers describe the Self in God-terms. And anthropologist Emile Durkheim famously equated society with God: “God is Society, writ large”.

Each of the groups seeks to enter into a relationship with their “God”. But what distinguishes deity-centered Paganism is that polytheists do not seek to identify with the gods. Earth-centered Pagans, for example, seek to experience a sense of interconnectedness with the natural world, one that may border on mystical identification. Self-centric Pagans seek total identity with the wholeness which is the Self. And community-centered Pagans seek some degree of identity with their community. But deity-centered Pagans maintain a strict boundary between their sense of self and the identity of the gods. For a polytheist to identify with the gods would be hubris. In this sense, perhaps it is not an absence of boundaries that characterizes Elani’s relationship with the gods, but precisely the opposite. Which brings me back to Elani’s statement above about her own if-they-told-you-to-jump-off-a-bridge kind of faith.

Perhaps it is because other kinds of Pagans in some sense identify with their respective “Gods” that they would never ask the question Elani asks: “Who am I to go against the gods?” Earth-centered, Self-centric, and community-centered Pagans might all respond: “Who are you? Thou art God.” Thou art God! That’s something that a deity-centered Pagan could not say, and perhaps that is what most fundamentally distinguishes polytheism from other forms of Paganism.

Polytheists like to claim that the multiplicity of gods breeds a kind of pluralism that makes intolerance and acts of religious violence less likely. But as an earth-centered and Self-centric Pagan, I see more similarities than dissimilarities between polytheism and the monotheisms. And I wonder if what really distinguishes Paganism from the Abrahamic faiths is not the number of gods, but the belief that in some sense we are God. A polytheist would call this hubris and a monotheist would call it heretical. (At least an orthodox monotheist would. There have always been mystical strains within the monotheistic traditions which sought union with God.) But for many Pagans, the hubris of the statement, “Thou art God/dess”, is an article of, well, faith.

December 15, 2012
The questions that led me to Neopaganism
Next Post

December 30, 2012 What to buy a Pagan for Christmas
Recent Comments
95 Comments | Leave a Comment
"Ironically, the pagans have stumbled upon evidence that there will be an Armageddon exactly when ..."
The Penitent Man Shall Pass Call for a Pagan Community Statement ..."
"John H.Halstead...Someone wrote or said. Be the change you want to see in the world. ..."
Toni Stamps 13 Things You Don’t Need to ..."
""petty and defensive"?: "Are you foolish enough to think christianity is the elder?""
John H Halstead 13 Things You Don’t Need to ..."
"Attack? This isn't my faith :)Is it yours? You come accross more christian....petty and defensive."
Toni Stamps 13 Things You Don’t Need to ..."
Browse Our Archives
get the latest from
Pagan
Sign up for our newsletter
POPULAR AT PATHEOS Pagan
1