Over the years, I’ve experimented with several ways to introduce students to the topic of Mormonism: either South Park or the song “All-American Prophet” from the Book of Mormon: The Musical, Joseph Smith’s First Vision, sections of the Helen Whitney documentary The Mormons, as well as several excellent short introductions (namely Matt Bowman’s The Mormon People and Richard Bushman’s Mormonism: A Very Short Introduction). 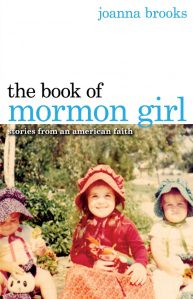 Brooks describes her 1980s Southern California Mormon childhood in loving and witty detail: the search for a non-caffeinated beverage at birthday parties, an overabundance of greasy casseroles and a Mormon festival at the Rose Bowl featuring 15,000 sateen-clad dancers.

Anyone wanting an introduction to Mormon culture in the 1980s should look no further. It’s a vivid, endearing, and hilarious portrait. LDS culture today is not identical – I would love to find an equally evocative account of Mormonism childhood in the early twenty-first century. Perhaps some of our readers can bring us up to the present.

One of the things in the book that disappointed me but didn’t surprise me was the extent of evangelical anti-Mormonism described. Brooks recounts that a “friend once invited the 13-year-old Brooks to an evangelical youth gathering at which a stand-up comic ended his routine with a deadly serious warning that ‘the Mormon Church is a cult.’” Protestant churches advertised showings of The Godmakers on their signs. It’s hard to imagine that this sort of behavior inspired young Latter-day Saints in California to seriously consider evangelical Christianity as a religious option.

Brooks’s sprightly yet thoughtful prose, her carefully constructed narrative and her passionate yet forgiving activism make hers a rare memoir that ended too soon. It is a triumphal declaration of unorthodox faith and an engaging — if unconventional — introduction to an American religion.

Finally, this post from Paul Harvey at Religion in American History from half a year ago deserves at least one more read.

September 7, 2012 BURNED-OVER DISTRICTS
Recent Comments
2 Comments | Leave a Comment
"If you're going down the Lutheran rabbit hold, make sure to check out "What's Going ..."
Chris In Search of Ghost Denominations
"Right, I have been thinking about such a Lutheran topic. Thanks."
philipjenkins In Search of Ghost Denominations
""Unborn" is an adjectival noun, much like "blacks" or "hispanics."By your logic, for the mother ..."
NorrinRadd Why Evangelical Women Should Mourn the ..."
"Hooray for her past. I was not aware that all those achievements of bygone days ..."
NorrinRadd Why Evangelical Women Should Mourn the ..."
Browse Our Archives
get the latest from
Anxious Bench
Sign up for our newsletter
POPULAR AT PATHEOS Evangelical
1

Ellen F. Davis: 30 OT/HB Scholars to Read...
So excited to introduce you to my friend, Dr. Ellen Davis. She is...
view all Evangelical blogs
What Are Your Thoughts?leave a comment
Copyright 2008-2020, Patheos. All rights reserved.