The Mormon Jesus and the Garden of Eden

The Mormon Jesus and the Garden of Eden February 28, 2013 johnturner

As a corollary to my current interest in the Latter-day Saint understanding of Jesus, I’ve been attempting to get some limited handle on the diverse ways that Christians of all sorts have understood, experienced, and depicted Jesus over time.

The very best thing I’ve done to that end is to pick up a copy of Jaroslav Pelikan’s The Illustrated Jesus through the Centuries. At risk of great hyperbole, everyone reading this blog should make time to leaf through this book. It would be a tremendous resource for pastors, and the inspirational potential for any believing Christian is great.

Recently, I was pondering “Adam-ondi-Ahman,” an early Mormon hymn written by William W. Phelps and included in a hymnal published later that year by the “Church of the Latter Day Saints.”

In March 1835, a revelation dictated by Joseph Smith (now canonized as Doctrine & Covenants 107) revealed the following:

Three years previous to the death of Adam, he called Seth, Enos, Cainan, Mahalaleel, Jared, Enoch, and Methuselah, who were all  high priests, with the residue of his posterity who were righteous, into the valley of  Adam-ondi-Ahman, and there bestowed upon them his last blessing.

Presumably taking this revelation as his inspiration, Phelps wrote the following poem, published in the June 1835 Messenger & Advocate (Kirtland, Ohio):

This earth was once a garden place,
With all her glories common;
And men did live a holy race,
And worship Jesus face to face,
In Adam-ondi-Ahman.

We read that Enoch walk’d with God,
Above the pow’r of Mammon;
While Zion spread herself abroad,
And saints and angels sung aloud
In Adam-ondi-Ahman.

Her land was good and greatly blest,
Beyond old Israel’s Canaan;
Her fame was known from east to west;
Her peace was great, and pure the rest
Of Adam-ondi-Ahman.

Hosanna to such days to come
The Savior’s second comin’
When all the earth in glorious bloom,
Affords the saints a holy home
Like Adam-ondi-Ahman.

Several things strike me about these words. The earth being “a garden place” following the fall. The idea of all glories being “common” seems in keeping with the early Mormon emphasis on economic unity and consecration. Enoch is a pivotal figure in Joseph Smith’ s thought, and the millennial hope is very characteristic (and here appears purely as hope without any accompanying predictions of judgment). It quickly became a popular Mormon hymn and was sung at the 1836 dedication of the Kirtland Temple. For some beautiful contemporary renditions of the hymn, follow this link.

Setting matters of sacred geography aside, when I reread the lyrics to the hymn several weeks ago, I was struck by the idea of Adam’s family worshiping “Jesus face to face.” I wondered if this pointed to a distinctive Mormon belief about Jesus.

Shortly thereafter, I came across this image from a medieval psalter in Pelikan’s Illustrated Jesus: 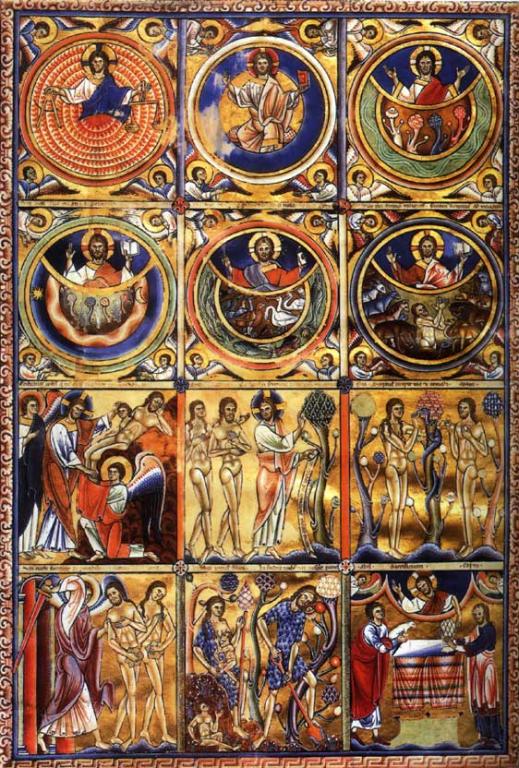 This particular psalter was begun in Canterbury around the year 1200 and then completed in Catalonia in the 14th century. Housed in the Bibliothéque Nationale in Paris, it is sometimes referred to as the “Canterbury Psalter,” alternatively as the Anglo-Catalan Psalter.  I’d love to be able to look at a facsimile; however, a recently published (and presumably very expensive) limited edition has eluded me.

Pelikan uses these illustrations of Genesis as an example of how Christians affirmed the cosmic significance of the Word, the Logos, the Son of God. Very quickly, I realized that Phelps’s image of Adam worshiping Jesus face to face wasn’t quite so unique. Instead, early Christians (and some to this day) identified the Lord walking in the garden of Genesis 3 as the pre-existent, eternal Word of God. Perhaps the idea of Jesus appearing to Adam following the expulsion is distinctive. It’s a rather beautiful thought, that Jesus graciously made himself known to the first human family following fall. The paradisiacal setting of “Adam-ondi-Ahman” also seems to convey the idea of a more fortunate fall.

When I read Pelikan’s book and savor the images therein, I sometimes sense the scales falling (slowly) from my eyes.

February 27, 2013
David Barton, Louis L'Amour, and the Use of Historical Evidence
Next Post

March 1, 2013 THAT'LL BE THE DAY THAT I DIE
Recent Comments
42 Comments | Leave a Comment
Browse Our Archives
get the latest updates from
Anxious Bench
and the Patheos
Evangelical
Channel
POPULAR AT PATHEOS Evangelical
1