THAT’LL BE THE DAY THAT I DIE

March 1 is the feast of David, the early medieval bishop and missionary who became patron saint of Wales. We actually know strikingly little of David apart from that date, of March 1, but I’m going to suggest that represents a good deal in its own right.

Through the Middle Ages, Christians cultivated particular saints, treating them almost as modern sports lovers follow football teams. They collected memorabilia and souvenirs, they traveled to great ritual occasions celebrating the saints, they wore symbols boasting their loyalty.  Devotees of St. Audrey bought souvenirs so memorably tacky as to give us our word “tawdry”! Often, these cults became so florid as to overwhelm the real achievements of the saints themselves.

David himself belonged to Wales’s remarkable age of saints from the fifth through the seventh centuries, when a band of heroic leaders maintained and expanded a rich Christian culture despite the catastrophes of social collapse and barbarian invasion. For centuries, David was only one great saint among many in Wales, whose reputation competed with other mighty leaders – Beuno, Illtyd, Cadoc, Dyfrig, and others. Over time, though, the churches that followed his name gained enough wealth and power to achieve superiority, and to write the Lives that would secure David’s primacy among the group.

His cathedral at St. David’s, formerly Menevia, is a gem of church architecture, with its  gorgeously colored stone. I should warn you that few photos ever catch its shifting colors, which vary so much at different times of day and seasons of the year  – you just have to go there to see it yourself. 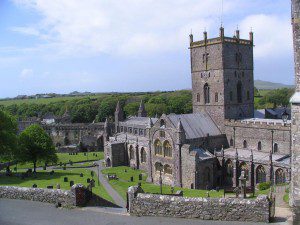 Ultimately, David became the national saint, and the symbol of patriotism. As early as 930, patriotic poets were talking of raising David’s pure banner against the English. When the Kings of England started naming their eldest sons Prince of Wales, David’s Day became part of British royal symbolism and celebration. 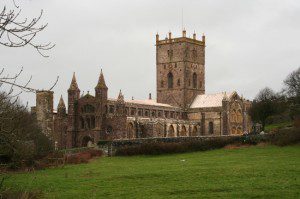 As I say, we really know very little about David that is historically solid and can only guess at his dates, or his main areas of activity. A death about 590 is a reasonable guess, but we could easily slip fifty years either way. Oddly though, we can be sure that he died on March 1, whether in (say) 532 or 632 AD. Through the Middle Ages, hagiography was a vast area of cultural effort, when almost any outrageous achievements could be credited to a saint. (No, David did not really make a pilgrimage to Jerusalem, where he was ordained by the Patriarch). The one thing that we know these writers did keep faithfully was the death day – the date not the year – because that marked the hero’s ascension to glory, the promotion to heaven. In a particular church or community, those days were critical, as marking the annual celebration of the beloved local saint.

Argue as much as you like, then, about precise years, achievements, martyrdoms and areas of activity, about the number of lepers cured and tyrants opposed – but don’t quarrel with death days.

It’s an interesting term. I know my birthday. I also know that at some future point I will die, and that that will befall on a particular date. Let me be optimistic and assume that it will be a distant event, say on July 23, 2049. Each year, then, I pass through July 23 happily unaware that I am marking my Death Day, surely as significant a milestone as my birthday, but not one I can ever know with certainty until it occurs. Nor is it something we really ever contemplate, as we all know, in our hearts, that we are immortal.

I suppose though that it is something we can learn from those medieval monks, that the Death Day is not just a key event in anyone’s life, but literally the only one we can take with absolute confidence.

February 28, 2013
The Mormon Jesus and the Garden of Eden
Next Post

March 3, 2013 DYING QUIETLY
Recent Comments
0 | Leave a Comment
"The commentary on the Bible of Kralice (from 1579; https://en.wikipedia.org/wi... says this (my own translation ..."
mcepl I Gave Them Laws Through Which ..."
"Weren't the Septuagint translators Jewish? The texts they had access to, we do not have ..."
giovanni barca Bitter Words and Inspired Scriptures
"In Acts 15:15-17, James reads from Amos 9:11-12, but HIS Amos 9:11-12 is very different ..."
FredClark Bitter Words and Inspired Scriptures
"100%"
Sean Dattoli The Role of Women in Pentecostalism
Browse Our Archives
get the latest updates from
Anxious Bench
and the Patheos
Evangelical
Channel
POPULAR AT PATHEOS Evangelical
1