FROM CRANMER TO WELBY

This year more than most, March 21 is a date of multiple significance in the Church of England. You might justly ask whether the English church still matters much on the world stage, but the wider Anglican Communion assuredly does: by the middle of this century, there could well be 150 million Anglicans worldwide.

Historically, March 21 commemorates the burning of Archbishop Thomas Cranmer by Mary Tudor’s Catholic regime, in 1556. Cranmer has a fair claim to rank as the founder of the Anglican tradition and the creator of its liturgy and Book of Common Prayer. He is also a complex figure who had gone far towards compromising with the regime in an attempt to save his life. Ultimately, though, he died as a martyr. 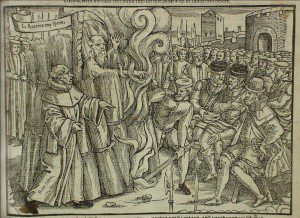 That contorted story explains his appeal for modern writers and biographers. Charles Williams wrote a wonderful play about Thomas Cranmer of Canterbury (1936), which bears comparison with that other great religious play of the British 1930s, Eliot’s Murder in the Cathedral.

This year, though, Anglican identity is even more centrally in the news on March 21 because of the enthronement of Justin Welby as the 105th Archbishop of Canterbury, in a line dating back to St. Augustine in 597. As the media have reported extensively, the new Archbishop faces an extremely difficult political situation in that church, which is deeply split over issues of homosexuality, and the election of women bishops.

Welby himself, though, has a fascinating background, which might allow him to meet some of these challenges. His earlier career in the oil business gave him extensive contacts in Africa and particularly Nigeria, and that might give him a foundation on which to engage with some of the global Church’s most conservative leaders.

Moreover, his spiritual background is in tune with many Global South figures. The Anglican tradition has long been divided between Anglo-Catholics and evangelicals/charismatics (high and crazy versus low and lazy, in popular terminology).  In recent years, as overall attendance has declined steadily in England itself, charismatic churches have emerged as centers of striking growth and fervor. Most notable perhaps is the parish of Holy Trinity Brompton, which has much in common with a US megachurch. Among other highlights, it is the source of the famous Alpha Course.

Welby himself is an alumnus of Holy Trinity, which he and his family began attending after the catastrophic loss of an infant daughter.Following that event, “the couple accompanied the Rt Revd Sandy Millar, then Vicar of Holy Trinity, Brompton, on a trip to California, where they met the Revd John Wimber, one of the founders of the Vineyard movement. During the trip, Bob and Penny Fulton, who helped to found the Vineyard movement, prayed with the Welbys in their hotel room.”

In 1987, he was profoundly affected by hearing an American speaker, almost certainly John Wimber. This encounter launched Welby on the road to ordination, and to forsaking his lucrative corporate career – as one British cartoon wryly noted, he is a “lapsed capitalist.”

Even in the most optimistic scenarios, Archbishop Welby will face a difficult road ahead. He will need all his undoubted talents and experience.

By the way, as we are speaking of new leadership, I just published a piece at chronicle.com on the new Pope Francis, and another on the same subject at Realclearreligion. Had it not been for the arrival of Pope Francis, the media would no doubt be paying way more attention to the new Archbishop Welby!

March 19, 2013
With Signs Following: Baptists and the Holy Spirit
Next Post